A Quart of Ale± #34. Moving on over to craft with a session of lagers. Variety is the spice of life. Our craft brewers keep it coming!

Moving on over to craft with a session of lagers.

Variety is the spice of life. And our craft brewers keep it coming! 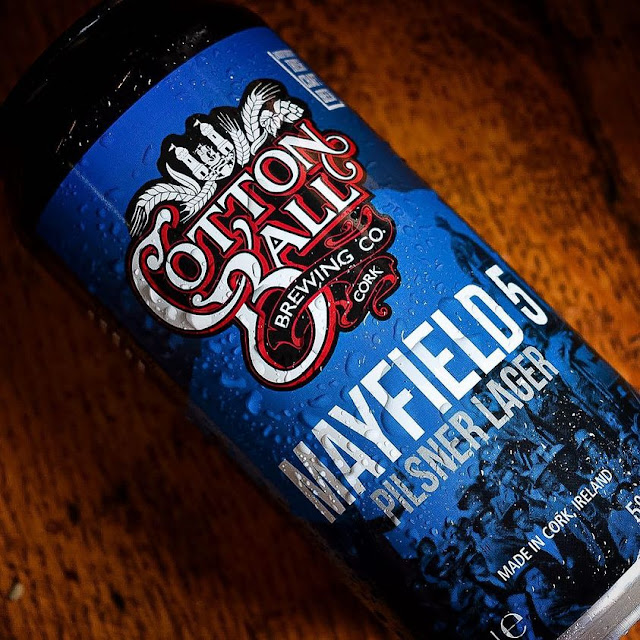 This lager, from my local, has a mid-amber colour, fountains of little bubbles, white head slims down rapidly but then hangs around for a good spell. A modest touch of hops in the aromas. The refreshment factor immediately appears on the smooth palate, spot on balance between the German hops and malts. Has more character going for it than many lagers, good mouthfeel too. A thirst cutting clean bitterness rounds off an excellent lager experience.

They say: This Pilsner Lager, like the Noble Northsider’s adventures, spans the Atlantic, brewed using 100% Irish malted barley, clean bittered with three U.S. grown hops followed by a late kettle addition of Noble Hops (Hallertau Perle and Hersbrucker). Pour is clean and refreshing with a subtle aromatic hop flavour arising from a bed of light caramel malt. The Classic brew to compliment party food. This inviting pilsner goes down smoothly with gourmet burgers, pizzas or wings. A perfect hit at BBQs a great choice for alfresco dining.

And the northsider they refer to on the label is Humphrey Lynch, who left Ballyvourney at 15 years of age and settled in an American town known as Byefield which he later used in naming his Cork estate house. After working for two years with Joseph Longfellow, cousin to the famous poet, he worked for a year in the ship yard at Newburyport until the American civil war in which he fought in a string of “engagements”. He returned to his native Cork in 1874 and set up in Mayfield, calling his newly-purchased public house The Cotton Ball. And the Lynch family are still here today, the brewery one of the latest additions to the family’s businesses.

A light straw colour and a white head are the immediate attractions here. There is much more of course. This has been “dry hopped it to the heavens with Loral, the Super Noble hop with distinctive floral, herbal and peppery notes, making this beer a delightful sipper to savour” and when I think of it that was the very first thing I noticed, the instant I pulled the opening tab!  And Loral makes its presence felt on the palate as well, citrus, floral and herbal streams and that distinctive bitterness a factor both in the mouth and in the dry finish. A refreshing lager, Italian style, full of hops and character

This is their 3rd beer in the Irish Munro Series. The peak is Mount Brandon (3122 feet) on the Dingle peninsula. Brandon is named after Saint Brendan the Navigator and the Pilgrim’s Path takes you to the summit. Don’t forget to bring a can to quench your thirst when you reach the top.

Style is Italian Pils. ABV is 4.9% and IBU is 32. Loral is the hops and malt used is Irish Lager Malt.

Bubbles galore rise through the light amber lager from Longford - St Mel’s produce a lot of lager here. They say: Do you want to treat your taste buds? If so I suggest you try "Ah Sure Look it" a Spring Bock Lager with a rich malty flavor complimented by a subtle noble hop bitterness. An explosion of flavor.

This “Ah Sure…” is part of a mini-series with other titles such as Go on so (a light lager) and I will, yeah, a juicy pale ale.

A mild touch of light smoky toast in the aromas and soon the Mel’s typical crispness shines through on the palate, accompanied by a malty bodyguard. Excellent mouthfeel too and very satisfying finish indeed.

Nice bit of Springbok muscle on this one. Joking! Nothing to do with South Africa of course. This is a bottle-fermented Maibock — the strong bock lager brewed in Bavaria to coincide with the start of Spring. I’ve read that Bock was brewed by Bavarian monks to sustain them during their (Lenten?) fasting. Joking aside, this is a very enjoyable lager indeed, well worth investigating.

The St Mel’s label reckons it pairs well with pork sausages, nutty cheeses like Gruyere (should be fine so with Hegarty’s Templegall, Irish beer with Irish cheese) and with cheese and ham toasties. Light straw is the colour of this beer without a nominated style, another with a head that makes a rapid exit. So what is it? A lager, a gose or a sour. If I had to shoehorn it into a style, then it would be lager, a limey one! Lime is prominent in the aromas and flavours and listed in the ingredients.

Don’t know what kind of yeast has been used - the beer is not yet on their website - but I believe it’s a lager yeast. But you can see from the acidity why Gose (salt is listed as an ingredient) and Sour are mentioned. Quite a refreshing drink too by the way and should go well with Mexican (and similar) cuisine, particularly during an Irish summer.

They say: The label encourages us to “Drink wildly different”. What is it? A lager, a Gose, a sour.. All or none of the above.. put simply it is the most refreshing beer we’ve ever brewed. Ingredients: water, barley malt, wheat malt, hops, yeast, lime, salt.

Brewery is based on a farm in Somerset. Barrel-ageing and blending beer is at the heart of what they do at Wild Beer. Barrel ageing is a big thing here and they have over 600 barrels to take on the nuances of the previous inhabitants of the wood, where time can reveal complex layers and flavours that deserve to be savoured with friends or food - preferably both!

Previously in A Quart of Ale±.

A Quart of Ale± #34.  Moving on over to craft with a session of lagers.  Variety is the spice of life.

A Quart of Ale± #33. Moving on over to craft with St Mel’s Brewery.

A Quart of Ale± #32. Moving on over to craft with Lambic and Geuze

A Quart of Ale± #31. Moving on over to craft with Stout & Porter. Elbow Lane - Whiplash - Eight Degrees - Cloudwater.

A Quart of Ale± #30 Of Art And Brewing. Five Little Cans Of Hopfully. Inside Out, Kneesocks, Legswap, Graciosa, Shinebright.

A Quart of Ale± #29 Moving on over to craft. Lager Variations

A Quart of Ale± #28 Moving on over to craft. With A Variety of IPAs

A Quart of Ale± #27. Moving on over to craft with Pale Ale

A Quart of Ale± #26A. Moving on over to craft. A Variety of Lagers

A Quart of Ale± #26 Ballykilcavan Farm

A Quart of Ale± #25. Moving on over to craft . Another round of IPA

A Quart of Ale± #22 Moving on over to craft. Golden/Blond.

A Quart of Ale± #20. Terrific Irish Ciders. "Lucky to have each of them"

A Quart of Ale± #18 Moving on over to craft. Wheat Beers

A Quart of Ale± #15. Moving on over to craft with Stout

A Quart of Ale± #14. Moving on over to craft with non-alcoholic

A Quart of Ale± #13. Moving on over to craft. Brewdog. Kinnegar. Galway Bay. Roadworks.

A Quart of Ale± #12. Moving on over to craft with IPAs

A Quart of Ale± #11 Moving on over to craft. American Style IPA

A Quart of Ale± #10. Moving on over to craft. American Style IPA

A Quart of Ale± #9 Moving on over to craft. American Pale Ale

A Quart of Ale± #8. Moving on over to craft. Kinnegar, To Øl City, West Cork Brewery, O'Hara's, Pale Ales.

A Quart of Ale± #7. Moving on over to craft with a classy quartet

A Quart of Ale± #6 Moving on over to craft. 4 good ones here: Kinnegar. White Gypsy. To Øl. Sam Smith

A Quart of Ale± #5. Moving on over to craft with lager.

A Quart of Ale± #4. Ales from Ireland's East Coast

A Quart of Ale± #3. An impressive trio from Thornbridge and one from Berkshire's Siren

You'll have Time for a Quart?