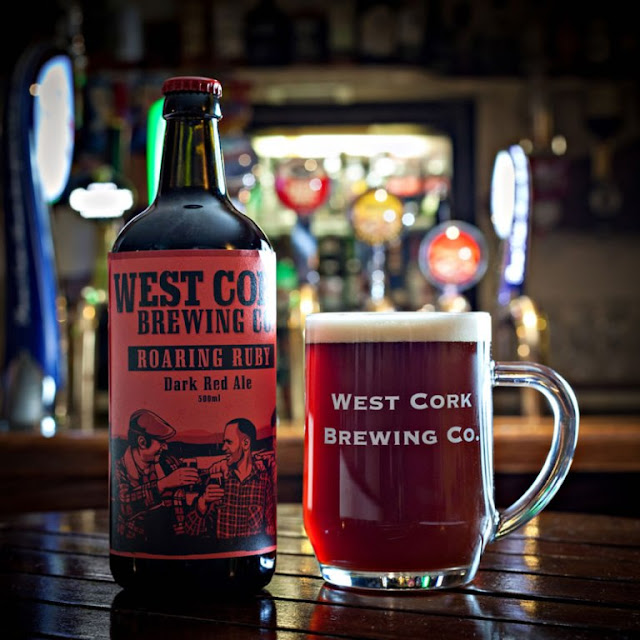 Is Red Ale an Irish style? In the 1970s, beer writer Michael Jackson is credited with giving the tag to Smithwicks. According to World Atlas of Beer, American beer competitions started awarding prizes for the category and smaller Irish breweries started to “launch highly-hopped higher strength or even barrel aged versions”. As you can see below, Eight Degrees gave as good as they got in recent competition with their dry Sunburnt.

The recent Brew Dog books mention only the American Red, in fact they barely mention the Irish scene at all. Sláinte (2014) acknowledges that there is some “dissent” about Red being an Irish style but say some local breweries have “evolved the style”. More recent examples include Porterhouse who have “banished the sweet”.

Looks like the style is still evolving. We  have four good ones below for you and another handsome trio (Eight Degrees, Cotton Ball and White Hag) to come in Part 2. 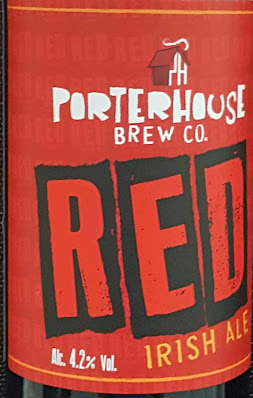 Porterhouse, a pioneering Irish craft brewery, are the producers of this red ale. Darkish red/brown is the colour here, and the off white head has a brief span. Both Malt and Hop figure in the aromas and also on the engaging palate, engaging because of exuberant fruit and a small streak of malty caramel. Fresh and fruity, with  superb caramel finish (almost stout like), I suspect (even at this early stage in the group) one of the better ones.

They say: Irish red ales? Yes, we know. Sweet, a bit cloying and, well, no thanks. So, it was brave of us (we say bravely) to put the words “red ale” after our own moniker. Why the hell would we do that? Because this is a real red ale, ….But sweet? No way. Balanced, yes. Fresh, yes. Aromatic, yes. In fact, we say yes, please. 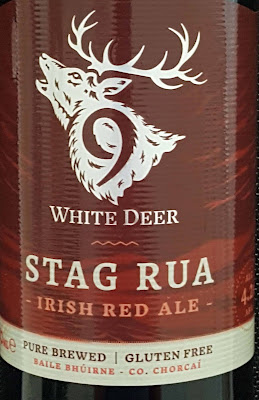 Made with a mix of ale, crystal and chocolate malts, Stag Rua pours a very dark red indeed, with a soft off-white head. Chocolate, coffee and caramel in the aromas and also on the smooth palate. A really balanced beer with no single ingredient dominating. Quite a satisfying mouthful indeed. Easy-going as they indicate and also Gluten Free (since 2018).

They say: Stag Rua has an aroma that is rich and malty with little hops, although we use a considerable amount of hops their presence is behind the malt but there none the less. It will pour with a off white rocky head and should last all the way down the glass leaving a lacing behind. Stag Rua, an Irish Red Ale is a favourite style of our head brewer and we hope you enjoy drinking it as much as we love it. Be big, be bold, Bí Dána.

Colour is a dark red mix with an off-white head that doesn’t last too long. Malt plus a sniff of coffee in the aromatics and the same combo, with a stronger showing from the coffee, shows in the palate. Here too, the Sorachi and Sabro hops also figure, rather mildly though.

Indeed, “mild” is perhaps the most apt descriptor, though not in a pejorative manner. Touted as a modern red ale, I’m well pleased with it (nothing to do with its modernity or otherwise) and would love to try it in a direct joust with other reds like Roaring Ruby (from West Cork Brewing), Kinnegar’s Devil’s Backbone, Copper Coast (from Dungarvan Brewing), White Gypsy’s Ruby Red, the award winning Sunburnt Irish (8 Degrees), Costello’s Red Ale and more (including the newish Velvet Red by the Cotton Ball). Could be a long session. And I’d need food as well! 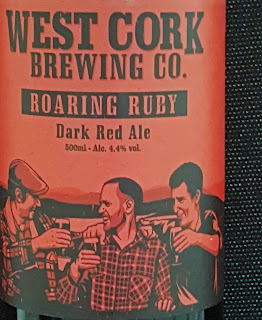 This Dark Red Ale from Baltimore is indeed a dark red with a head that soon diminishes to a thin lacy disc. Aromas are caramel and toasty. And you get much the same on the palate, toffee, caramel and coffee. All a bit stout like, yet this has its own distinctive flavour and texture with its malt bill prominent. Perhaps a bit more traditional than some of the other Irish ones but none the worse for that.

It is Unfiltered and Vegan friendly as only whirlfloc (carrageen moss) is used to aid in clarification. Free from fluoride, chemicals, preservatives.

Brewed using their own spring water.

Their story. Bacchus and Dionysus get some credit on the West Cork Brewery website but it is the yarns built around founders Kevin, Henry and Dominic that catch the attention. Read about the three founders here.