Is Red Ale an Irish style? In the 1970s, beer writer Michael Jackson is credited with giving the tag to Smithwicks. According to World Atlas of Beer, American beer competitions started awarding prizes for the category and smaller Irish breweries started to “launch highly-hopped higher strength or even barrel aged versions”. As you can see below, Eight Degrees gave as good as they got in recent competition with their dry Sunburnt. Indeed, the four below are each very enjoyable.

The recent Brew Dog books mention only the American Red, in fact they barely mention the Irish scene at all. Sláinte (2014) acknowledges that there is some “dissent” about Red being an Irish style but say some local breweries have “evolved the style”. More recent examples include Porterhouse who have “banished the sweet”.

Looks like the style is still evolving. We had some very good reds in Part 1. Check it out here.

In September 2020, Brewing's Sunburnt Irish Red was named World's Best Pale Amber at this year’s World Beer Awards. The verdict on the beer from a panel of international respected judges was: "Dry, a distinctly deep coppery red in colour, and full-bodied with a good head. There are some bitter, burnt raisin aromas, and it’s distinctly hoppy but with malts still present. Very assertive on the palate, with light carbonation and multi-layered flavours”.

Eight Degrees founders Cam Wallace and Scott Baigent were delighted. “Sunburnt Irish Red is the second beer that we ever brewed - back in 2011 - and it’s been a core part of our range ever since.”

Coppery red for sure but that head vanished quickly. That palate though is something else with its edgy melange of hop and malt, bitter and toasted, making it both assertive (as they say) and distinctive. A new kind of Irish red perhaps! The winning kind, I surmise, as the gently bitter finish fades away.

They say: Like an Irishman on holidays in the Canaries, this beer has a red glow with a chilled out mellow feel. A traditional Irish style with a twist,  – orange marmalade on toast – with a gentle bitterness,

It wouldn’t be Eight Degrees without a food tip: Goes really well with roast pork, lamb burgers or a venison stew and don’t miss a chance to try it with an Irish washed-rind cheese. But beware: keep out of direct sunlight.

A very dark red indeed with a coffee coloured head (which departs pretty quickly leaving just a lacy hint or two remaining on the top). Aromas are moderately intense, floral and fruity (citrus). No shortage of character even if pretty much in the classic mode (though it is gluten free) but there’s a refreshing tangy, even exotic, fruitiness and a touch of clean pine in there as well.

A well-made beer, nicely balanced between the various hops, the bitter and flavour, nothing extreme and the malt sweetness. With its caramel and toffee notes, it makes a pleasant smooth drink on its own and I expect it makes a good companion at the table. Might go down well with one of those tasty Wild Boar burgers from Ballinwillin Farm or perhaps a pizza in the Cotton Ball when it reopens.

Hops used are Herkules and First Gold with a dry hopping of the versatile Mosaic. They have (or at least did have) a nitro draught version in the bar. They brew quite a range of beers and the core ones are all on draught in the bar and indeed in lots of other bars. And there’s a handy growler service as well.

They say: “We are brewing our beers in the true spirit of our Great Grandfather Humphrey J Lynch, an American civil war veteran and cotton mill foreman. Three wives later, Humphrey returned to his native Cork in 1874, to set up his very own public called the Cotton Ball. The pub and the family are still here today and three generations later we are finally brewing our very own selection of craft beers in his honour.”  The brewery was founded in 2013. 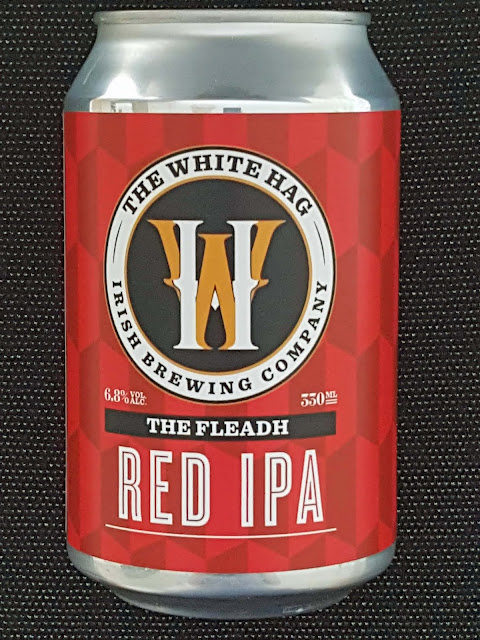 Some years ago, I was in a brewery. Well, I’m in at least one brewery every year! But this was different, a big sporting occasion in The Kiln at Murphy’s Brewery in Cork. Lots of gossip going on, lots of beer being poured. The guest of honour came in and you knew it, the minute he walked in the room, even if you had never heard of Charlie Hurley, the Cork born Irish international who has had a stand named after him in Sunderland. He just had this presence and the room unanimously acknowledged it.

It’s a bit like this with The Fleadh. You go through the preliminaries. The deep dark red colour, the last stop before black. The aromas. And then comes the big intro. On the palate. The hubbub stops, tastes buds turn and you concentrate as the personality of this strong beer takes over. Not in an overbearing way, mind you.  But there’s a firm handshake from the earthy malts and the fresh hops, caramel and fruit and a youthful freshness. A superb red ale. One you cannot ignore. Quite possibly your beer of the year.

They say about An Fleadh: A celebration of legendary festivals in Irish Mythological society, an ancient cultural event of music, dance, story and song. Our Red IPA is a symphony of complex earthy malts and fresh forward hops that play the lead in this ensemble. The resulting performance is a seamless combination of fruits and caramel, complimented by the distinctly fresh pine tones.

Just like the legendary Charlie Hurley, this is a strong one at 6.8% ABV and the IBU is 55. The minute he walked in the room…. into that same room, just like Noel Cantwell and Frank O’Farrell.