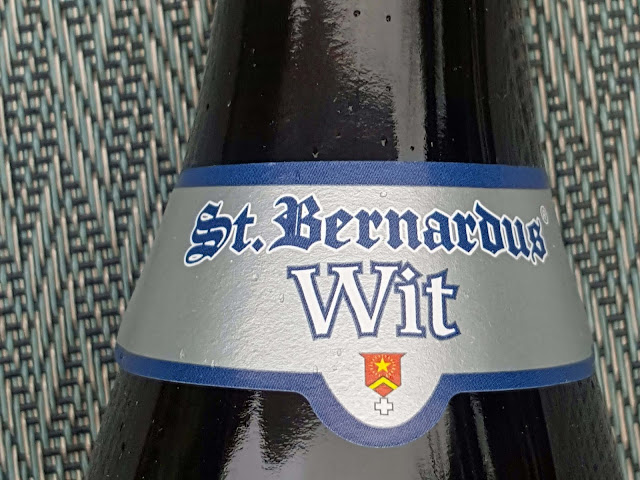 The most famous wheat beers come from Germany and Belgium where the refreshing drinks are known as Weissbier and Witbier both of which translate as white beer, hence the Westport and Kinnegar whites in this and the previous post. The style normally contains a large proportion of malted wheat. Like all beer styles, Wheat Beers are on the move. Just when you think you know something about it, your brewer thinks of a variation and, according to Craft Beer for the Geeks, “fruited wheat beers are the new normal”.  San Francisco’s 21st Amendment Brewery has the ultimate: Hell or High Watermelon! I was wondering if there were any Irish contenders and then along comes Hope’s Grunt below.

This famed Belgian, a classic, has a hazy golden/yellow colour, not too easy to see the bubbles but they are there; nice head at the start but won’t be around for long, a lacy veil is all that remains.

Audaciously aromatic with clove notes standing out, touch of orange and coriander too. Very refreshing, your perfect thirst quencher as herbs and fruit mingle merrily in this traditional unfiltered Belgian white beer.

It was developed in collaboration with Pierre Celis, the legendary master brewer who founded the Hoegaarden brewery, brewing their signature beer that was the driver of the resurgence of white beer in the 1950s.

They say: This incredibly versatile beer can be paired with almost any recipe from anywhere in the world. Its most outstanding role is perhaps that of a refreshing contrast when served with creamy dishes - a risotto for example - or in combination with shell fish and white fish. Do you serve a slice of lemon with your fish? You can echo that or a lemon sauce or dressing with this beer with its strong hints of citrus. 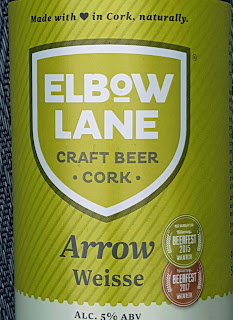 Brewed according to the German Purity Law, this Cork wheat beer has an amber robe with a fairly ample white head that stays full for a minute or two, then shrinks to a narrow disc. Typical aromas of clove and banana and those flavours also on the palate which has a refreshing citrus-y streak. Apparently the clove and banana come from the special yeast used to brew this satisfying beer. No artificial preservatives or additives are used and they indicate it is best served at 7-8 degrees.

Somewhat heavier on the palate than both the Japanese and the German (in Part 1) but do remember that Elbow brew their range of beers to match the dishes in the group’s five restaurants in Cork City. The Arrow Weisse was the critics’ choice  recently to pair with ox tongue and kimchi salad. By the way, you’ll note that the staff in the various restaurants are well versed in the merits of each of the beers.

Elbow Lane is one of the smallest breweries in Ireland and you’ll find it in the restaurant of the same name. All the beers are called after lanes (some of them no longer exist) in the city. Market Lane is the “mothership” restaurant and the others are ORSO, Castle Café, Goldie and Elbow Lane itself. 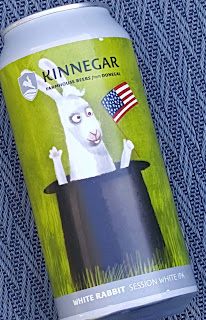 Citrus leads here and there is little enough evidence of the clove and banana that is prominent in some wheat beers in this cloudy lemon coloured IPA, a very well made one, from the innovative Donegal brewery. There’s a generous fluffy white head that lasts a fair bit.

No let-down in the mouth where the malt and hops get together in an impressive juicy fruity amalgam. A lovely balance indeed and an excellent dry lip-smacking finish with a slight bitterness in evidence. Second can appeal for sure.

They say: This is a classic American wheat beer that blends fruity malt with fruity hop flavours and opens them up with a voluminous, puffy white head.We don’t filter or pasteurise, and we let our industrious little friends, the yeast, carbonate the beer naturally during fermentation.”

There may be a bit of sediment, so pour this cloudy beer carefully but if some ends up in the glass, don’t worry about it. “It’ll put hair on your chest,” as my mother used to say when she spotted someone’s reluctance to try something new. 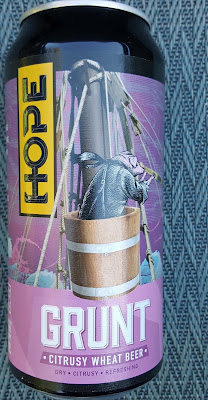 Craft Beer for the Geeks say “fruited wheat beers are the new normal”. Well, here’s an Irish one, so let us see what’s going on in the tin. On the tin itself, there’s  rather fanciful yarn as to how the beer got its name.

The beer  though is not fanciful though the short-lasting head is a bit of a tease. The liquid  is a slightly hazy light gold. It is quite assertive on the palate, bone-dry, citrusy and a little spicy, the citrus coming from the hops plus the adjuncts lemongrass and bergamot. Good refreshing finish too though you have to concentrate hard to find the notes of juniper, the other addition. An excellent beer but I’m not sure I’d be guessing its style correctly in a blind tasting.

EBU, by the way, is 21 and they say Grunt is an excellent accompaniment to most food, in particular fish, to replace a traditional dry white wine, but also spicy food, where the strong flavours and refreshing quality of the beer can hold its own where a wine could not. It is also good with both strong cheese, and creamy cheese.

Had I not known about wheat as an ingredient (listed on their website, but not on the can), I’d have been inclined to class this as an IPA rather than  wheat beer. In any case, it’s a very decent drink indeed.