A Quart of Ale± #8. Moving on over to craft. Kinnegar, To Øl City, West Cork Brewery, O'Hara's, Pale Ales.

Moving on over to craft with four very interesting ales

Lovely light gold colour on this one; a fair bit of haze but you do see the bubbles rising. It is floral and hoppy on the nose. Crisp and refreshing in the mouth with a pleasant hoppy finalé. Not at all overly hoppy and a beer that could well prove a “gateway” beer on the way from mass beers to craft. Easy to quaff and one to note if you haven’t already. One of their first beers and still going strong as part of their core range.

It is unfiltered, naturally carbonated. When pouring leave any natural sediments (I didn’t see any) at the bottom. Well balanced and easy to enjoy this one! By the way, if you moving into craft, try this as one of your early steps! I did, and it’s never too far away from my mind when I enter a bar.

The story.  A bright white light from Fanad Head once illuminated the Limeburner (a 40m high hidden sea pinnacle where Lough Swilly meets the Atlantic), guiding passing ships away from danger. “Phew,” said the skipper when they left that pinnacle behind. “Pass me a Kinnegar there boy.” 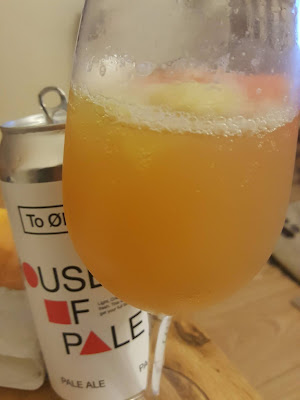 A slight step up in alcohol for the Danish Pale Ale (compared to the Kinnegar) but the colour and the head is much the same as their Session. A little more hop in the aromas. More flavour and less crisp but, as they say themselves, come here to “get your full-bodied juicy fix”.  That smoothness shows a lot of malt but the hops is not shy either and that juicy stuff is a treat. Put this on your short list for sure.

They say: House Of Pale is one of the recipes we’ve taken from our beloved mad laboratory (brewpub!) in Copenhagen, BRUS. It’s seen many changes and tweaks over this year, experimenting with hop doses and overall ‘crispiness’ - and now we’re pretty sure we’ve got exactly what we’ve been looking for.

Hops in the ale are Mosaic and Simcoe while the long line of malts consist of Chit Malt, Flaked Oats, Golden Naked Oats, Melanoidin, and Pilsner. 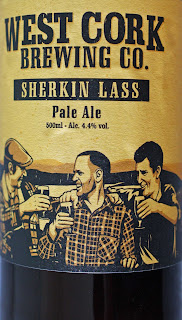 Mid amber is the colour of this cloudy pale ale by the West Cork Brewery in Baltimore. The head barely outlasts the pour. They use their own well water here and the beer is obviously unfiltered.

Citrus in the aromas. Makes quite an immediate impression on the palate, fresh and lively, sharp citrus notes again, pineapple and passionfruit too, more malt than hops, just lightly, but noticeably, bitter, almost halfway to a sour. Quite a distinctive mouthful. Refreshing and quite a thirst quencher.

Hops used are: Columbus, Centennial, Galaxy, and Liberty. It is unfiltered, unpasteurised and vegan friendly as only whirlfloc (Carrageen moss) is used to aid the clarification. 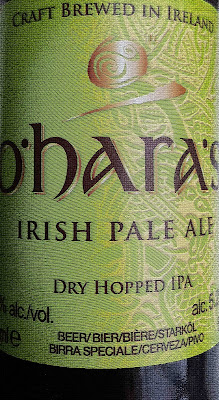 Mid amber is the colour of this well-made Irish Pale Ale. IPA all over the labels; nowhere is the word Indian mentioned, but I still wonder is it Irish Pale or Indian. Anyhow we’ll be soon going on to the IPAs. Quite often, it is hard enough to classify some beers. I’ve even got one here at the moment labelled an Indian Pale Lager!
Aromas are definitely hoppy, Indian Pale Ale hoppy. The head by the way starts frothy and large enough but soon gets down to barely a white disc. Actually, I’m nowadays inclined to dispense with the 45 degree angle when pouring and lash it in, the reward being more a substantial head that, in this case at least, gives you the pleasure, just visual, of a longer stay.
On the palate though, this one makes you sit up and take notice with the fruit and floral notes of the hops plus the zesty lasting bitterness. Lip-smacking, for sure.
They say: “A Contemporary style IPA with an Irish twist. Combining the balance of European IPAs with the generous dry hopping of American pale ales (APAs), this beer is everything an IPA should be and more.”