A Quart of Ale± #13. Moving on over to craft. Brewdog. Kinnegar. Galway Bay. Roadworks. 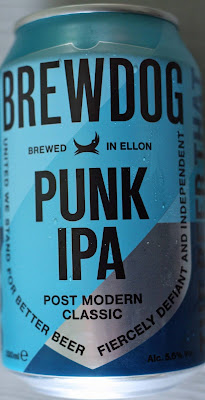 Brewdog Punk IPA 5.6%, 330ml can Bradley’s of Cork
“Punk IPA began with us brewing a beer we wanted to drink and ended up starting a revolution. It is our flagship - assertive, bitter and with an explosion of tropical fruit.” James Watt, Brewdog. The beer was inspired by the hoppy pale ales of the US. It was released in 2007 and in 2011 they “changed it up” by adding “the benefits of dry-hopping”.

From the can, it pours light gold, clear almost. White head gives a brief nod and sinks. A fairly intense whiff of tropical fruits. And tropical fruit galore spreads out on the palate. They use words like riot and anarchy yet this beer is amazingly balanced, well made, well bred, not quite the spiky clanging punk the PR implies. Quite a beer though. I could go along with the tag on the label: Post Modern classic. I’d love to try a pint of draught!

The IBU is 40 (35 in the book) and Extra Pale and Cara are the malts used.
Hops are: Ahtanum, Amarillo, Cascade, Chinook, Nelson Sauvin, Simcoe. 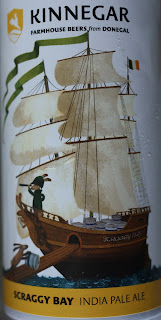 This IPA from Donegal has a gold colour and a friendly enough white head that doesn’t shrink the minute you look at it. It is hazy, unfiltered and naturally carbonated.

Aromas, hoppy, are modest enough but nothing shy about it when it reaches the palate. A hoppy uppercut makes those taste buds stand up and take notice. But no need to worry, this is a balanced IPA, a friendly fecker from the friendly farmhouse brewers.

The Punk may have been first out of the traps, but this Donegal bunny is the cutest thing, knows her hops and Scraggy is a worthy competitor in this space.

They say: Lough Swilly’s natural and cultural history is beautifully captured in the Irish and English place-names that mark its coastal features. Beneath the Knockalla Hills lies Scraggy Bay, giving us a local name for a style of beer with a great maritime past. 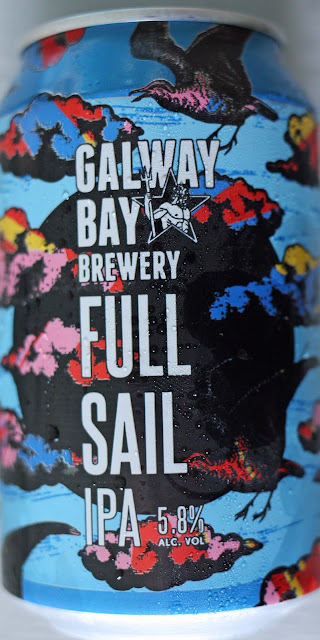 Straw is the colour and the head is an off white. Aromas are a touch on the sour side. Hops are prominent on the palate but the malt has a decent say as well and the beer is balanced. Hops are added  through the process, including dry hopping, and I can agree that the beer is “as fresh as can be”. Another excellent beer from Galway Bay.

The hops used are of American origin, Colombus, El Dorado and Cascade (45 IBU). With multiple generous additions in the kettle and further dry hopped before it reaches you as fresh as it can be.
Food: The acidity and hop bitterness in this beer makes it great for standing up to most spicy dishes, such as Indian and Mexican dishes. The freshness of the beer makes for a great companion to grilled meats and barbecues.
They say: The simple malt bill gives an ABV of 5.8% which carries the flavour and really allows the hops to shine through. Serve at: 6-8 °C

This Aldi beer is produced by Pearse Lyons in Dundalk. It has a hazy light gold colour. Look closely and you’ll see plenty of bubbles rising up to the creamy white head. A mild mix of tropical fruit in the aromas. And mild enough too on the palate. Hoppy enough too at this stage. Easy drinking and refreshing with a satisfying dry finish.

A decent enough body that they partly credit to the Golden Baked Oats. Not too much detail on the label and no website found. It is a flavoursome US style IPA. It would be nice to see a bit more info and the way Aldi play with labels (not just the Lyons beers) is confusing to say the least.
#DrinkResponsibly
Aldi Bradley’s of Cork BrewDog Galway Bay Brewery Kinnegar Roadworks