A Quart of Ale± #18 Moving on over to craft. Wheat Beers 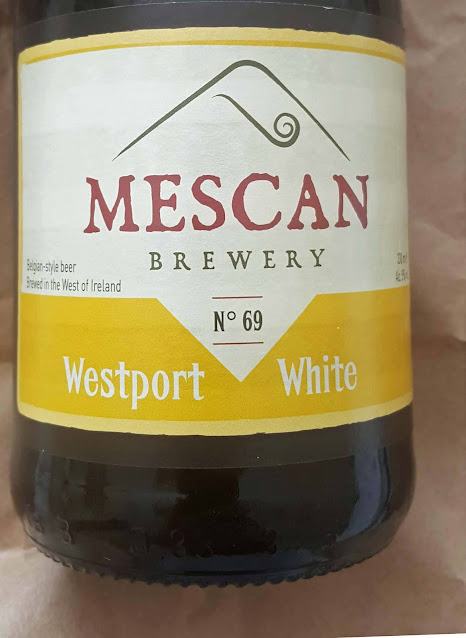 The most famous wheat beers come from Germany and Belgium where the refreshing drinks are known as Weissbier and Witbier both of which translate as white beer, hence the Westport and Kinnegar whites in this and the following post. The style normally contains a large proportion of malted wheat. Like all beer styles, Wheat Beers are on the move. Just when you think you know something about it, your brewer thinks of a variation and, according to Craft Beer for the Geeks, “fruited wheat beers are the new normal”.  San Francisco’s 21st Amendment Brewery has the ultimate: Hell or High Watermelon! I was wondering if there were any Irish contenders and then along comes Hope’s Grunt (Part 2).

Malts, hops and yeast for this Wheat Beer come from Belgium and the water (holy water?), comes from the slopes of Croagh Patrick where the brewery is situated.

Pale gold is the colour. Frothy white head atop the hazy body. Plenty of carbonation noticed even in the cloud. Aromas mild, clove is a modest element. Crisp is the first tactile sensation, the clove again and then citrusy and floral notes before the lingering dry finish. A terrific beer, well balanced, refreshing with a lip-smacking finalé.

They say: Yeast in suspension in wheat beer is at the origin of its trademark haze but may eventually settle at the bottom. A gentle swirl near the end of the pour will restore the beer’s traditional appearance.

The suggested serving temperature is a lower than usual at 4 - 6 ° C. The Belgian style beer comes, as Belgian beers normally do, with food pairing recommendations. In short, light dishes such as fish and salads are just the job. Also recommended as a thirst quenching aperitif! For the full details check here.

Mescan Brewery is named after Mescan the monk who was St. Patrick's friend and personal brewer. It is situated on the slopes of Croagh Patrick and is owned and operated by Bart Adons and Cillian Ó Móráin, two Westport vets, who have been friends and colleagues for nearly 20 years. The pair spent four years perfecting their original recipes inspired by the beers of Belgium, Bart's homeland, before starting to brew commercially in 2013.

The water for Mescan beers comes from deep underneath Croagh Patrick via a spring beside the brewery. Malts, hops and yeast for the beer come from Belgium. 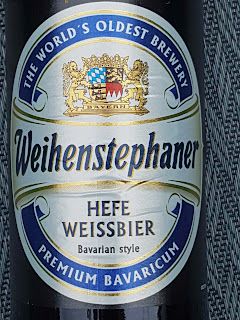 Weihenstephaner are proud of this wheat beer: a veritable classic – and the star of our beer ensemble. And I can happily agree. It has a light gold colour, hazy, with a fluffy pillowy head. Typical clove aromas and banana flavours. Superb refreshing flavours and a delight on the palate along with an excellent dry finish. Reminds me of why I so enjoyed wheat beer early on but wheat beers are in a minority in Ireland and you don’t come across them that often. A classic indeed.

This Weihenstephaner is made according to the Bavarian Purity Law of 1516. Drink at 6-8 degrees. It has a mild IBU count of 14 and they recommend pairing it with Obazda (a Bavarian cheese spread) - I’m sure we could rustle up something similar around here. What we cannot magic up is a brewery as old as Weihenstephaner - they’ve been at it since 1040! Other food pairings noted are with fish and seafood, and especially with the traditional Bavarian veal sausage. 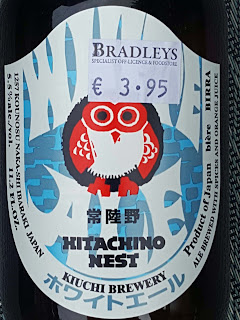 Hazy mid-gold colour with a white pillowy head that’s in no rush to get away (perhaps the torrefied wheat has something to do with that!). And, yes, those clove aromas and banana flavours. We’re on solid wheat beer ground even if this one, all 11.2 fluid ounces of it, comes all the way from Japan’s Kiuchi Brewery. It has been brewed with additions of spices, coriander and orange and there’s certainly a hint or two of citrus on the palate and spice notes (nutmeg) too of course. Nicely rounded soft flavours, well-balanced. Easy drinking, easy to like. Another one for the short list!