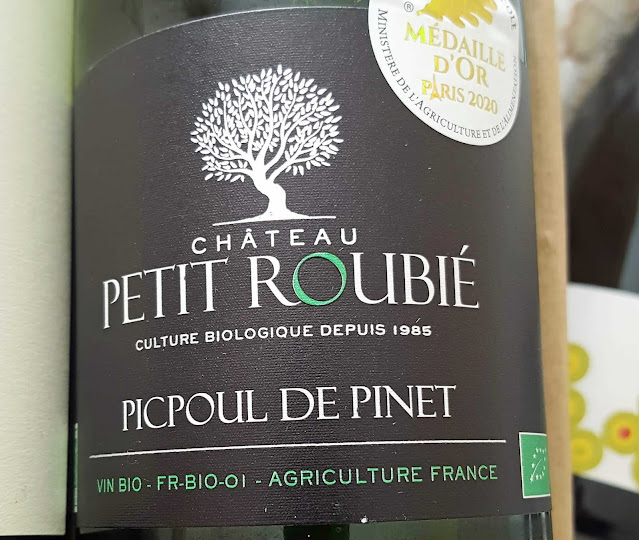 Light gold, with faint green reflections, is the colour of this Picpoul. Aromas of the wine are somewhat shy but mainly floral. Crisp on the palate, no shortage of acidity either yet, with white and citrus fruit on the palate and its excellent mouthfeel, it is more harmonious than you’d expect for the grape. Dry for sure, especially towards the finish, and obviously an excellent match for oysters and shellfish (which are abundant in the area).  Serve at about 8 degrees for best results. I think this is even better than the previous vintage, so Very Highly Recommended.

Importer Mary Pawle says it is often referred to as the Muscadet of the South. Indeed, you’ll almost certainly come across Picpoul more than Muscadet on Irish restaurant lists these days.

The Picpoul is grown on a clay-limestone terroir not far from the large Thau lake, on the edge of the Med. While regarded as a lake, it has very high salinity.

Château Petit Roubié has been practising organic farming since 1985. Floriane and Olivier Azan have owned the estate since 1981 and have developed, thanks to a judicious choice of winemaking, a very attractive range indeed. Their lands are in a historic area; if you visit, you can still see vestiges of the Via Domitia (the Roman road) in their scrubland. And those Roman engineers were building on top of an even older “road”. The wine is presented in a distinctive Neptune bottle though that, as far as I know, has nothing to do with the Roman god of the sea.

€41.00 New to the range but available online at Mary Pawle. 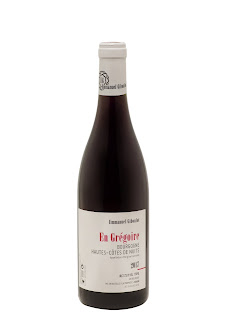 This light and perfumed biodynamic 2017 Burgundy, mid to dark ruby in colour, has plenty of berries in the aromas. The attack is fresh with lots of fruit coming on strong, more gentle as the smooth finish is reached and fine tannins dry the lips. Very Highly Recommended.

The producers confidently assure us that "En Grégoire" "can accompany a beautiful plate of cold meats, grilled meats, a dish

exotic. Its complexity will do wonders."

An excellent Pinot Noir then. Par for the course in these parts, you might well say. Except that, as recently as 2014, this winemaker Emmanuel Giboulot was fined and threatened with a jail term for sticking to his principles.  He was convicted for refusing a government order to spray crops with pesticides, following fear over an outbreak of golden rot, only to have the decision reversed on appeal.

Emmanuel met the problem of agricultural practices and its impact on wine and human health head on - Prison rather than poison - and is now a prominent advocate for organic and biodynamic viticulture. His wines reflect his principles and the widely acknowledged exceptional Burgundy terroir.