A Quart of Ale± #7. Moving on over to craft with a classy quartet

Here, and in #8, we'll be trying a few pale ales that could well help a beer drinker make the move from mass produced stuff to a really good beer. As it happens, the quartet are Irish, and each is very approachable indeed. If you're a bit unsure as to where to start, why not try the Ambush and then move on back up to the Howling Gale (my favourite of the four).

With its familiar label statement of Fresh Citrus and Grapefruit, Howling Gale blew into our lives about nine years ago. We’ve changed a lot since then but not this superb ale, one they got more or less correct from the off, and is still their most popular beer.

You get a smack around the gills, they say, when you sup this refreshing ale. But nothing fishy about this Ballyhoura hero, perfectly formed from day one. Pleasant citrus aroma from the Cascade and Simcoe Hops, these hops and sweet malt harmonious on the palate and the bittering hops are waiting for you at the finalé. No shortage of carbonation in this mid-amber ale and no regrets when you pull that tab and pour. Enjoy - you’re in good company.

They say: This Irish Pale Ale delivers a refreshing crisp smack around the gills. With a pleasant grapefruit citrus aroma from Cascade and Simcoe hops, it has a biscuit malt sweetness, followed by an attractive bitter finish.

Style: Irish Pale Ale
Malt: Irish pale malt, Carapils, Munich, Cara
Hops: Nugget, Cascade, Simcoe
Strength: 4.5% ABV
Bitterness: 38 IBUs
As always, Eight Degrees come up with Food Pairings:  Pale Ales are traditionally seen a great foil for spicy food – there’s a little bit of sweetness there that will cut the chilli burn – but don’t miss the chance to have Howling Gale with fish and chips (or in the batter for the fish!). It’s well worth trying with a Cashel Blue and Broccoli Gratin, the bright citrus notes act like a squeeze of lemon with smoked salmon or pair it with semi-soft, washed rind cheeses like Milleens, Durrus and Gubbeen. 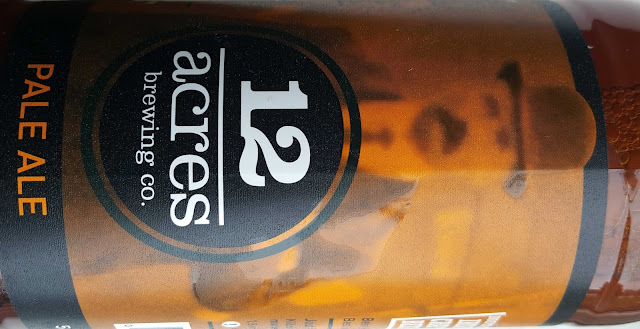 This golden Pale Ale is the flagship beer from the 12 Acres Brewery in County Laois. Our Land to Your Glass is the logo here, based on the fact that all of the water used and some of the barley comes from the family farm.
Mid-amber is the colour, slightly hazy and not that much carbonation going on. The white head stays for a while but soon contracts to a thin disc. Aromas are modest.
Their own plus “a small quantity of three other European speciality malts” add texture and a sweet caramel flavour on the palate before the three American hops (Cascade, Willamette and Citra) get their say towards the end.
They say the beer has more emphasis on the malt flavour than a traditional APA, has a distinctive American Pale Ale bitterness and citrus flavour. “Our pale ale is also dry hopped to give a lovely tropical fruit aroma to the finished beer. Best served 6-8 degrees. It goes great with spicy foods!”
Wicklow Wolf Elevation Pale Ale 4.8%, 440ml can Bradley’s of Cork

Nice bright amber colour with bubbles rushing to the white head that soon fades away. A mildly hoppy aroma. The hops edge it on the palate, good flavour overall and a very easy-drinking beer, welcome as a once off or for a session. Another excellent effort, a more or less perfect Pale Ale, from the Wolf.

They say: An incredibly drinkable Pale Ale bursting with juicy fruits of pineapple and grapefruit from an abundance of hop additions. Refreshing.

This is a hazy beer (little evidence of carbonation) with a light straw colour, and a soft white head that slowly sinks. Exotic fruit aromas, mango and pineapple, hops too, in the mix. And then much the same fruits combining delightfully on the palate, this juicy pale ale, with its moderately hoppy backbone, makes you stop and take notice.

You’ve been ambushed. So, sit back and relax with each silky juicy mouthful (make that each sip - you’ll want to let the magic linger), as you’ve got one of the best of class in your hand.

Malts used are Irish Pale, Oats (credited with imparting the smoothness), Carapils and Crystal while hops are Mosaic, El Dorado and Citra.

They say: Trouble Brewing is a craft brewery based in Kill, Co. Kildare, set up in 2009 by three close friends Paul, Thomas and Stephen. Trouble Brewing is one of a small number of Irish breweries producing quality craft beer in order to offer people an alternative to the large multinationals, that spend more money on advertising than on ingredients, and specialise in bland.
12 Acres Bradley’s of Cork Craft Beer Eight Degrees good beer Supervalu Trouble Brewing Wicklow Wolf