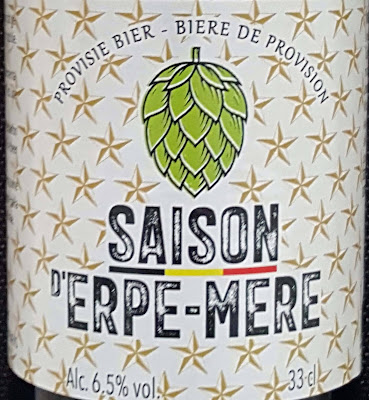 Jef Van Den Steen, a former professor of mathematics, is a master of saison at De Glazen Toren Brewery. Saison originated in Wallonia, in the French speaking part of Belgium, and that’s where Jef found it and fell in love with it.

Why? “Because of its drinkability - it is never sweet, always dry, refreshing and very drinkable,… a very old style, more than 200 years old.” You can find Jef talking about saison on a 2016 You Tube short.

It is a farmer’s ale, also known as a table beer, brewed in one season (winter) for drinking in another (summer) by the farm labourers. While most saisons now are mid to high abv, the beer then (in the 19th century and in the first decades of the 20th) was much lower so the workers weren’t falling about in the fields all day.

Because it had to kept fresh for six months or so, extra hops were added to enhance shelf life. “Hops protect beer from ageing and I very much like bitterness. I don’t like sweet. Sweet is good for horses and elephants, not for humans.”

The De Glazen Toren brewery in Erpe-Mere, Belgium, was founded in 2004. Within ten years the initiative of the brew masters Jef Van den Steen and Dirk De Pauw, along with a third partner, Mark De Neef, has grown from a brewing hobby into a successful, professional company.

Colour of this one is a hazy pale gold - no shortage of little bubbles rising - with a big white head. Taste that head - stick your finger in - and you’ll note the bitterness (you may notice it again at the finalé). Aromas yield  a more modest bitterness, hints too of citrus. No extremes on the palate where it all - the aromas and the flavours- come together in a supple harmony,  a refreshing flow. And you remember that refreshment was the aim with Saison. You didn’t want your workers dozing off after lunch. If I were the farmer handing this one out, I think I’d keep it for the weekend!

As ever, the Belgians come up with food pairings:

They say:  Barley and wheat malts have been used to produce this beer. Liquid sugar too! The beer is brewed according to the old Saison tradition of Hainaut. The beer is not filtered and is pure natural. 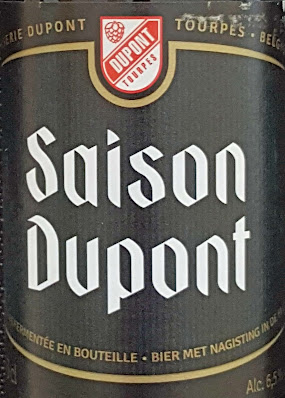 A former drinking partner used to describe the head on a local stout as “ice cream”. I’m reminded of that remark when I pour, perhaps too quickly, my bottle of Saison Dupont. The head shrinks but slowly enough.

Beer has been brewed here in Belgium’s Hainaut for centuries though it is only in the last 20 years or so that the Dupont Brewery has become a global reference for saison.

Farm beers of this type – light, rather dry but fruity – were traditionally brewed during the winter, ready to quench the thirst of the seasonal field workers (saisoniers) during the summer to follow.

It is a cloudy mid-amber, fountains of micro-bubbles. Aromas of citrus. Light and fruity, zesty and refreshing, yet no shortage of hearty flavour. Reckon any labourer, even a keyboard one, would be happy with this impeccable beer. Superb finish also with the bitterness now to the forefront. Nothing quirky, nothing extreme other than extremely good. As Michael Creedon of Bradley’s told me “if you don’t like this, you don’t like saison”.

They say: Saison Dupont was first brewed in 1844. This copper-blond beer yields amazingly delicate aromas paired with a pronounced hop-bitterness. The house yeast and the local hard water, drawn from a well, play an important role in the creation of this beer. An in-bottle refermentation makes a major contribution to the development of this complex and highly aromatic beer. 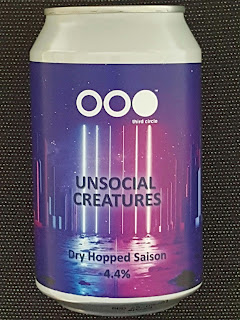 Pours a golden colour washing up the curve of the glass, fluffy white head not built to last. Hops, with some sweetness, in the aromas. I like to think this is the real thing. It tastes so good. Absolutely drinkable, the hops in every drop making every drop one of hit-the-spot drinking pleasure, jackpot every time. Crisp and fruity and moreish.

They say: We took our old house saison recipe and brought it up a notch. Hopped with Topaz and Cashmere. Expect a crisp, highly quaffable, summertime slammer with notes of white grape and melon.

Third Circle beers are made in Dublin, Ireland. “In collaboration with our friends at Stone Barrel Brewing we have founded Third Barrel Brewery which is located on Bluebell Avenue in Dublin 12, where Third Circle beers are produced. We use a pre-loved 1,100 litre brewery system which, in a previous lifetime, spent many years decocting fine Pilsners in the Czech hills.” 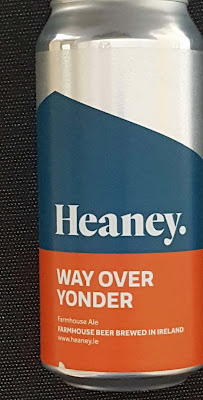 This hazy beer from the County Derry farmhouse brewery pours a gold colour, with a fluffy head that hangs around for a bit. Fruity and slightly spicy in the aromas. Fruity too on the palate, apricots are suggested. “A funky yeast” adds to the complexity of this fruited farmhouse ale.

The label say its a rustic ale but I find it rather elegant and smooth, though I’d better add that I’ve known some rustics who are also quite sophisticated. In any event, it is well made and balanced and an excellent beer. One for the grafters, they say. But, if they were my grafters I don’t think I’d be handing it out at lunch-time with its 5.7 abv. Perhaps keep it for the end of the day.

By the way, I had a few dried apricots (unsulphured) in the house and the pairing with this saison was perfect.

They say:  We make this beer for “the grafters” and Mrs Heaney is lauded as the original grafter. “For generations our family farm has been a place of harvest and inspiration; in step with the past and striking a new future.”