Number Two in a new series on beer. I'll be doing the best I can to cover a broad range but, if I'm missing out on your brewery, just let me know. While the focus will be mainly on Irish craft beers (and ciders), I'll also dip into the best of imports. Today's selection roams over the range, with beers from Blacks of Kinsale, Yellow Belly of Wexford, Trouble Brewing Dublin and from the Wicklow Wolf brewery. 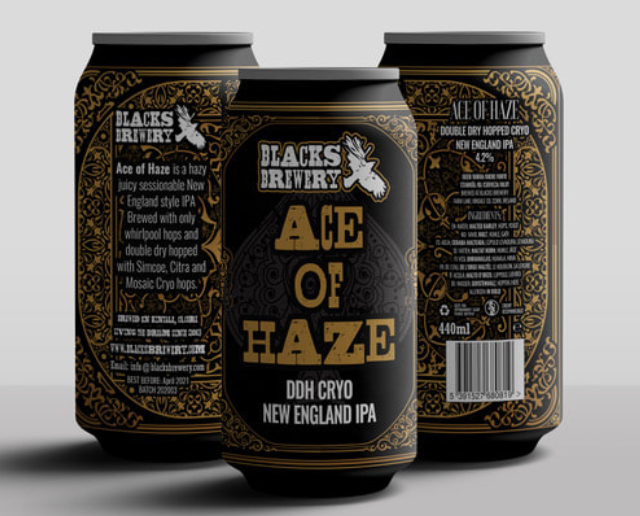 We came to this one, our lips still wet from drinking a bottle of Blacks KPA during a meal at the excellent Cornstore in the heart of Cork City. I have to say straight up that we agreed that this New Englander is a lovely beer, very drinkable, but also agreed that the KPA is our favourite of the two.

Okay. KPA stands for Kinsale Pale Ale, so a pale ale. But what’s a New England IPA? Blacks say: Characterised by juicy, citrus and floral flavours and a smoother less piney taste than some other IPAs you might be familiar with, New England IPA is a style that became popular in Vermont USA in the 2010s. Hazy in appearance with a soft mouthfeel, NEIPA's are brewed without adding hops to the boil and with the use of specific yeast strains to achieve the desired result. Often described as a more fruit forward IPA with lower perceived bitterness but massively hop forward with flavours and aromas derived from the use of dry hopping techniques.

This NEIPA (hardly an abbreviation!) is a hazy yellow. It weighs in at 4.2% (as against 5 for the KPA) so it certainly a session contender. No shortage of hops in the mix but it’s the fruit, citrus and exotic, that makes its mark rather than any bitterness (which is there, in the background). Very drinkable though and sure to gather up lots of fans. By the way, Blacks have at least one other Haze edition. 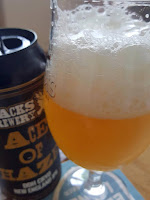 They say: This banging beer was brewed with passion and an absurd amount of cryogenically frozen Mosaic, Citra and Simcoe hops not forgetting a touch of inspiration from some rock classics that are commonly heard on the brewery floor on brew days. The malt bill of Barley, Oats and Wheat gives plenty of body and character but we have kept the ABV on the lower end for IPA's so you can enjoy more than 1 or 2 in a sitting.

Hazy yellow is the colour here, a white head (size and length depends a lot on how you pour, probably best if on draught). You’ll probably de-juice that Citra Hops are used here. Head Brewer Declan Nixon has also employed German and Belgian malts. I think he’s judged this to a “T” and has come up with a really well-balanced beer.

A hint of pine in the aromas and this smooth drinking beer has citrus flavours, is very pleasant on the palate and, with all that, plus the help of a modest enough alcohol count of 4.8%, has that second glass appeal for sure.

Let us hear what the Wexford crew have to say for themselves: Our Citra Pale Ale is brewed with the finest German & Belgian malts, fermented with a super clean American ale yeast and dry hopped to the gills with Citra. The resulting beer should be enjoyed as fresh as possible to appreciate the grapefruit and pine aroma and super clean finish.

They regard it as a flagship beer. Citra Pale Ale can be enjoyed year-round on draught or in can from your favourite bars, restaurants and off-licences. It was voted Best Beer in Ireland 2019 – Beoir Awards 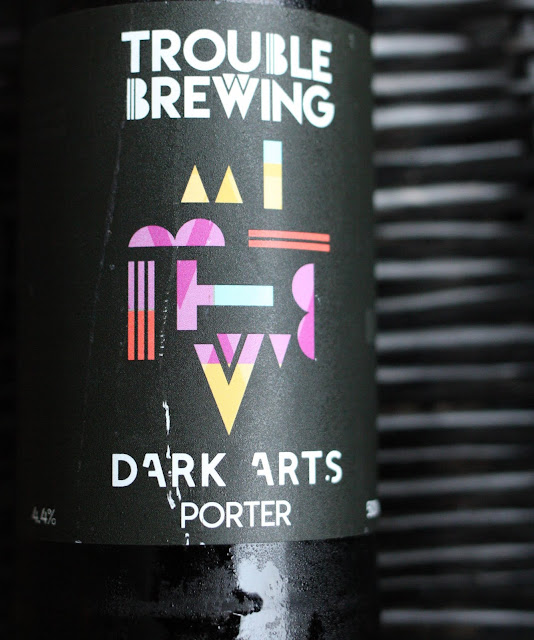 Pours black as you’d expect and you can get quite a head (coffee coloured) if the pour is more rapid than usual. Chocolate, caramel and coffee among the aromas. And they also feature in the flavours, balanced by a freshness, almost like acidity in wine. Indeed this lighter bodied black reminds me of those well made light dry red wines that have become very popular in recent years. A very decent porter even if I still retain a preference for stouts.

Trouble Brewing are very happy with the early success of this one, and why not. Their Facebook: Dark Arts is the second beer we ever brewed here in Trouble and has stood the test of time to become one of Ireland's outstanding porters.

I’m regularly amazed as to how often brewers get things right from the get-go. Howling Gale by Eight Degrees, Black’s KPA are early examples and Trouble say they never touched the Dark Arts recipe since the initial production. Eight Degrees also started with a porter but that has been sidelined and replaced with their Knockmealdown Stout. Perhaps there’s a message there.

Colour of this West Coast IPA is close to amber with a nice fluffy head that sinks quite slowly. It gets its name because a mammoth amount of Simcoe, Chinook, Cascade and Eureka! have been used to pump up the fruit. And the hops take the lead in the aromas as well. Very much floral and citrus in the palate as you’d expect but no shortage of malt either (Pale ,Cara Ruby the varieties used). Rather a muscular beer (compared, say, to Trouble Brewing’s Ambush) but the muscle’s not out of control and the Mammoth will find a welcome in any good beer circle.
beer Blacks Brewery and Distillery Bradley's O'Briens Wine Trouble Brewing Wicklow Wolf Yellowbelly