A Quart of Ale± #5. Moving on over to craft with lager. 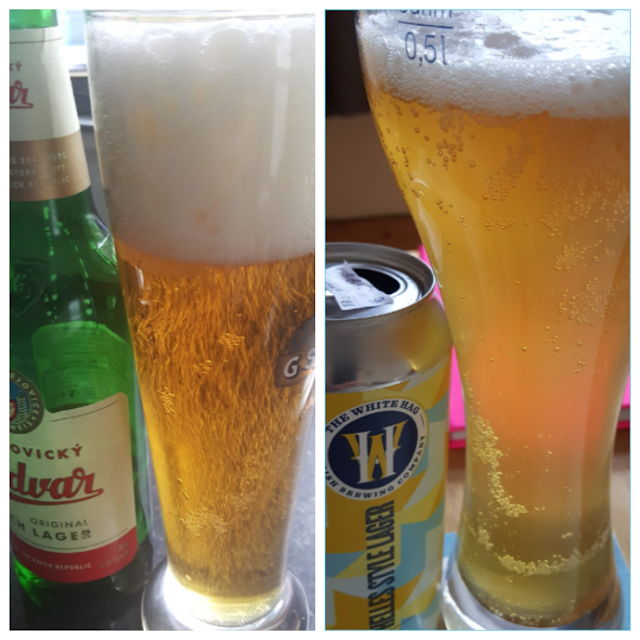 Lagers are a joy to drink but tough to brew. According to the Brewdog book, Craft Beer for the People, there are four sub-styles: Lager (like the four reviewed below), Kölsch, Vienna Lager, and Saison.

Perhaps the first lager, I ever drank was Carling Black Label.  If I remember rightly, in the early-mid 60s, you’d pay one shilling and four pence for a bottle, about the same price as a packet of ten cigarettes. You’d have a pretty good night out for one pound (apparently about 20 euro in today’s terms - looks like the 60s weren’t too bad after all).

Year by year, with TV advertising hitting increasingly strongly, with the likes of Carling’s Mabel and Harp’s Sally O’Brien, we were drinking mostly “big” beer, big bad beer such as horrible Harp and Tennents. There were various ales too, including Watneys and its dimpled pint glass.

On and on it went but bit by bit, I wanted something else (I was happy enough with the stouts available), and just gradually got fed up of one lager after another, hopping back to the first one for a few weeks, then onto another one and so on..

At some point, I stumbled across some German and Czech beers, mostly in bottle but do remember getting Staropramen on draught in the Woodford (Cork) or maybe the Paul Street bar was called something else then. Staropramen and other Czechs such as the Bud below were creeping in here and there and you could eventually get a selection in bottle and on draught in the Bierhaus.

And around the same time along came Franciscan Well and the new wave of craft beers. Lager was no longer a priority as we were eased into a whole new world of flavour via Blarney Blonde and Rebel Red, a brave new world and, eventually, new modern lagers as well.

We’ll get to the newer ones soon but, for old times’ sake, we’ll start with a Czech and a German that helped me on my way. 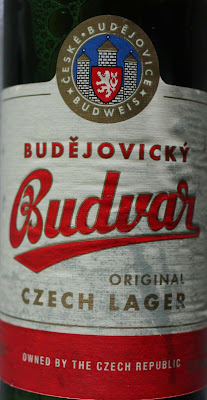 Budejovicky Budvar is the last of the state-owned breweries in the Czech Republic. Budvar is a beer for light beer lovers. High quality top-quality Saaz hops, pure clean natural water from 300-metre deep artesian wells and carefully selected grains of a unique cultivar of Moravian barley “make the premium lager a drink for real beer experts”.

It’s a pale amber colour in the glass with constant fountains of bubbles rising to the top. Head is soft and white and retention is decent enough and the aromas are mildly hoppy.

Very refreshing drink with some mild bitterness and, for many, a big step away from mass-produced lagers. Another Czech lager I’d have been trying at the time was Staropramen (now owned by Moulton Coors).

Budejovicky is quite a superb lager, the original Bud, and there’s been many a court case about the name between the small Czech and huge US brewery. Interestingly, the German name of the Czech town of Budějovice is Budweiser.

What you need to know and probably do is that the American version is a copy of the Czech beer and a dumbed down copy at that according to this article. You can check it out for yourself in a head to head. For me though, my order would be two pints of Budějovice and none of the other. Score: 2-0. At least! 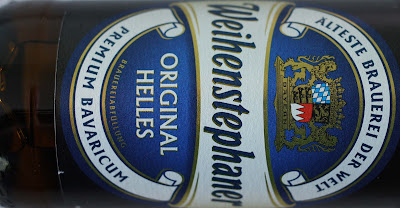 A light amber, even lighter than the Bud, and less bubbles also. White head doesn’t hang about. Delicate aromas but strong and clean on the palate. Another refreshing drink from the oldest still existing brewery in the world. The IBU figure, not given on all beers, is a modest 21. They also do a non-alcoholic version.

Again, like many of the continental beers, the brewery comes up with a food pairing. Here they recommended Rump steak with marinade and give you the recipe as well. Check it out here. 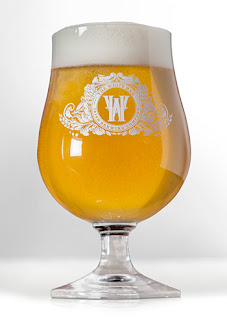 Enjoyed this one, a lager of the modern kind, a few weeks ago. Light gold, slightly hazy, is the colour, a host of bubbles rising. The big fluffy head is rather short-lived. Aromas are restrained, just a subtle hint of the hops. Very pleasant in the mouth, easy drinking and well balanced to the lip-smacking finish. Light and refreshing they say. Light and refreshing it is. A flavoursome thirst-quencher indeed. IBU is 22.

The Helles style originated in Bavaria (Germany) apparently and this characterful example is one of the best Irish efforts that I’ve tasted. You’ll also see beers designated as Munich lagers, more or less the same thing as Munich is the capital of Bavaria.

Once Covid19 struck, we had to go into the “cocoon”. So who would deliver food to us? Along came Neighbourfood, much to our relief and to that of many small producers and market traders who supplied it. My first order included a few beers from local Cork brewer Elbow Lane and very impressive they were, particularly the Pale Ale and the IPA. 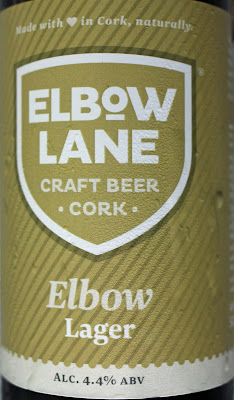 And now to the lager, probably closer to the Czech and German versions than any of the others. The micro-brewery, in a small space above the Elbow Lane Smokehouse, brews according to the principles of German purity and “we formulated the beers specifically to work with the food we (the Market Lane group) offer in our five restaurants.”

All the beers are named after medieval lanes in the city, the lager after Elbow Lane itself. It is a mid-gold colour with a modest head, a head that has more staying power than most. The very modest aromas reveal little. There is a surprising tartness as it hits the palate - remember they are gearing this towards dining in their restaurants - and you can see that this lager, quite a distinctive drink, will score well with lighter dishes, including Asian. We certainly enjoyed it, on draught, with Pan Fried Monkfish on a pre-Covid visit to Goldies.