A Quart of Ale± #3. An impressive trio from Thornbridge and one from Berkshire's Siren

An impressive trio from Thornbridge
and one from Berkshire's Siren

Thornbridge are best known (to me anyhow) for their superb Jaipur, a classic Indian Pale Ale. They started life in a local stately home and are now based in Bakewell, a small market town in Derbyshire, and you’ll find them on the banks of the Wye.  Having associated the brewery with Jaipur, I thought they were long established and was surprised to see they started up as recently as 2005. Following an array of awards and national recognition, Jaipur (launched in mid-2005) catapulted Thornbridge into the spotlight and eventually into a brand new brewery.
Thornbridge “Shelby” India Pale Ale, 5.0%, 330ml bottle, Bradley's of Cork 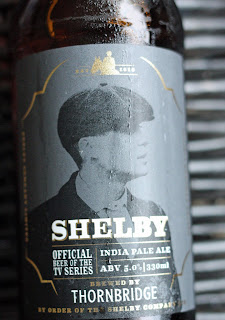 Shelby, the official beer of Peaky Blinders the TV series, pours a golden amber, the white head vanishing as quickly as an opportunist thief. Surprisingly fruity nose and that continues onto the arresting palate. Here too the maltiness makes a discreet and pleasant appearance and there’s a citrus enhanced bitterness. Excellent mouthfeel too. This is full of flavour and character, and so much better than many celebrity drinks.
Looks as if you were a beer drinker of 1919, the year in which the TV series is set, you did very well for yourself indeed. Once you weren’t doing porridge, of course.
Hops used are Fuggles and Bramling Cross while the malts are Low Colour Maris Otter, Crystal, Munich.

It is yellow and, just to confirm, a hazy one, more than slightly so.  Aromas see the hops float up with fruit coming through as well. Just a small little can but one with big juicy flavours from the backbone of a quartet of US hops, namely Cascade, Simcoe, Azacca, Citra. Malts, you may like to know are Low Colour Maris Otter, Wheat. Quite a combination. Lots of hazy stuff around nowadays but, clearly, this is one of the better ones.

I see craftcentral.ie describe this as “extremely crisp” but I can’t agree with that assessment. This is as smooth as they come, packed with those expected tropical fruits, with the American hops performing prominently in both the aromatics and flavours. Relax and enjoy. This is what craft beer, good beer, is all about. Cheers!

By the way, having finished a wine session and feeling lazy, I drank this from a Lumin Arc balloon type wine glass and found it worked out very well indeed, the 330ml can fitting in precisely with room for a fine if short-lived white foamy head.

You can smell the hops almost at “social distancing” here as this hazy ale fills your glass with a pale yellow, a big white head too but, unlike the hops, that soon clears down to a sparse cover. Tropical fruits aromas come from the Sabro (“fantastic”) / Citra / Ekuanot / Galaxy / Chinook / and Centennial hops. Malts by the way are Maris Otter / Wheat / Oats.

The hops also make their presence felt later on but there is no jarring domination. The beer is harmonious, pleasant and easy drinking, quite an exotic fruity juice bomb in the mouth and refreshing for sure with a dry finish.

The Salt Beer Factory, the other party in this collaboration, are based in a disused power station in the Yorkshire village of Saltaire, about 90 minutes north of Thornbridge (which is in the Peak District). And Tupelo? Must be the city in northern Mississippi, most famous as the birthplace of Elvis Presley. 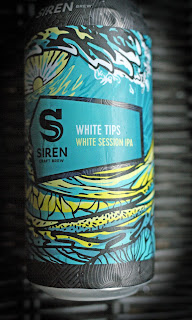 Pale yellow (hazy) is the colour of this session beer that lists wheat as one of the ingredients. The white foamy head beats a hasty retreat. Quite a lot of citrus, including sharp lemon, in the aromas. And, with the addition of a hint of clove, the story is much the same on the palate. Not surprising really, considering the brewers have added zest of orange, grapefruit and lime. Quite a distinctive beer to be fair and one sure to suit quite a few drinkers.  Yet there’s good harmony here and a lip smacking finish.

Siren brew this every spring and they say: “White Tips is our expression of a wit beer combined with IPA levels of hops. A traditional wit yeast works in harmony with the citrus peel and a healthy hop dosing to create a balanced IPA that is sure to pull you in wave after wave.”