A Quart of Ale± #6 Moving on over to craft. 4 good ones here: Kinnegar. White Gypsy. To Øl. Sam Smith.

Lagers are a joy to drink but tough to brew. According to the Brewdog book, Craft Beer for the People, there are four sub-styles: Lager (like the four reviewed below), Kölsch, Vienna Lager, and Saison. Lager is often the gateway for moving from mainstream to craft and this is Part 2 (See P1 here). We've a good quarter below, including two organic offerings. Next time, we'll be on Pale Ale, with eight examples - have you a suggestion? Then American style pale ale, next India Pale Ale (English style), American style IPA, British Golden Ale, Red Ale, Stout/Porter and on and on. Suggestions welcome!

So now, for Part 2 of this journey, we move onto the first of our modern lagers. With Kinnegar Brewing on the label, be prepared to be impressed.

And I was, both prepared, and impressed. No need to leave the island for your lager fix. With all due respect to the long traditions of the continent, the Donegal Lager is a champion. From a beer style point of view, DL is a light Helles. It's made with classic German hops in the traditional style.

It is refreshing as the best lagers should be and packs quite a flavour hit as well. Slightly less alcohol than the two continentals but the extra flavour more than makes up for that.

They say: DL is a classic lager - light refreshing and crushable. And in this case proudly independent and proudly from Donegal. Always keep a few in your fridge.

Libby from Kinnegar: “We’re delighted with how it's being received. It's intended as a high quality but very accessible lager. We've always felt that Limeburner sits comfortably on a lager-loving pallet but the truth is that Limeburner has a tad too much flavour/character for some people. DL should suit everybody who's looking for a traditional lager and is prepared to take a chance on a small independent Irish brewery. We hope in time to see plenty of it pouring on draught, particularly in Donegal, but for now it's working well in its can.”

And if you buy this lager you’ll be helping a very good cause indeed, with a fixed amount from each batch going to the Donegal Hospice. Libby says they hope to continue the scheme “at least until the end of the summer and hopefully for a lot longer”. 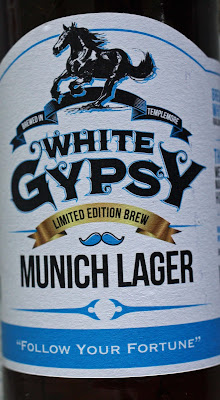 A bit more amber in the colour of this White Gypsy Munich Lager, thanks more than likely to the Weyermann Barke Pilsner malt. The head is not very large but does stay around for the duration, more or less. Plenty of bubbles too in the light haze.

Took a sip as I jotted down the first of the notes above and I immediately stopped “typing”, the better to savour this arresting Gypsy beauty. It has all the refreshment you’d expect from a lager but superb flavour as well and, yes, an excellent balance which keeps it in the easy-drinking category.

The label indicates that the hops used are Hallertau and Tettnanger plus a lager yeast. As well as maturation in cold storage, most lagers are also distinguished by the use of Saccharomyces pastorianus yeast, a "bottom-fermenting" yeast that also ferments at relatively cold temperatures.

It is also a much slower process than top fermenting ales and ties up your equipment for longer, so not too many micro-breweries are inclined to produce a lager, particularly in their early years. White Gypsy are well beyond that stage now with a portfolio of distinguished beers to their credit. 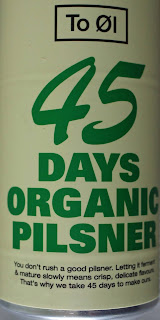 Fountains of bubbles race up through the pale gold (very slight haze) of this pilsner. Nice soft head too and it stays there for quite a while. And what a pilsner. Superbly fresh and clean as promised, well-flavoured too and absolutely refreshing, reaching deep.

The slower the fermentation, the better a pilsner tastes, they say, and the proof is on any palate lucky enough to be been washed in this Danish beauty. Not sure I’ve tasted anything better in this style. Crisp, complex and golden - do watch out for it!

Lager is always the slow-coach in the brewery but this one, the fourth product in their new Core Range, is an authentic German Pilsner, lagered for 45 days at -1 degree Celsius. It is also organic and the malts used are Organic Chit, Organic Golden Light and Organic Pilsner.

Nice gold colour and no shortage of bubbles, maybe not as many as in the Danish one. Head neither as large or as fluffy but seems intent on hanging around for a spell. Slightly floral aromas. Good bite on this one, a bit more mouthfeel, and a little extra by way of the malt.

Serve this at 7 degrees is the advice. And take your time - after all you have an extra 50ml! And the label also tells us that the IBU is 25.

They say: Brewed with great care using only organic malted barley, organic hops,  medium-sot water, and a bottom-fermenting yeast; matured at low temperatures to bring out its delicate flavour and soft hop-character finish. The cold maturation allows the bottom-ferment yeasts to secondary ferment and improve the lager’s flavour, purity and condition.