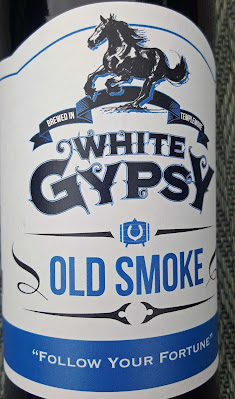 Starting off with a couple of excellent Irish porters and finishing with a pair of equally excellent stouts. In between, I take a look at the Founders Porter though not as impressed with this as I was with their Breakfast Stout .

By the way, the terms Porter and Stout are interchangeable according to the latest World Atlas of Beer. Craft Beer for the Geeks say stout is a stronger version of porter.

Pours black as you’d expect and you can get quite a head (coffee coloured) if the pour is more rapid than usual. Chocolate, caramel and coffee among the aromas. And they also feature in the flavours. Indeed this lighter bodied black reminds me of those well made light dry red wines that have become very popular in recent years. A very decent porter indeed (though I still retain a preference for stouts). 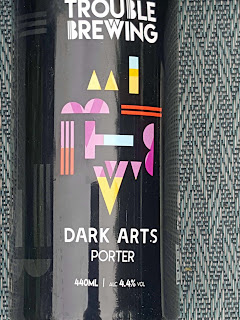 Trouble Brewing are very happy with the early success of this one, and why not. Their Facebook: Dark Arts is the second beer we ever brewed here in Trouble and has stood the test of time to become one of Ireland's outstanding porters.

I’m regularly amazed as to how often brewers get things right from the get-go. Howling Gale by Eight Degrees and Black’s KPA are early examples and Trouble say they’ve never touched the Dark Arts recipe since the initial production.

Where did they get the name? Sounds Australian to me. But no, they found it in their own little corner of Donegal where they get all the names for their beers. A stone’s throw from the brewery is a field with the intriguing name Yannaroddy.

Ever wondered about those mad illustrations on the Kinnegar cans under the theme “Follow the hops”. “Kinnegarland” is illustrated by the inimitable Dermot Flynn www.dermotflynn.com

They say: Yannaroddy Porter is rich in traditional dark roasted malt flavours laced with an exotic streak of coconut.

Hadn’t known about the coconut when I tried it but certainly the coffee and caramel are there in the aromas and on the flavour-packed palate. Black, of course, is the colour and the coffee coloured head is slow enough to vanish. It is velvety smooth, good acidity too on the way to a lip-smacking finish.

Not surprisingly, Yannaroddy is one of their core beers. The others are Scraggy Bay India Pale Ale, Limeburner Pale Ale, Devil’s Backbone (Amber Ale), Rustbucket Rye Ale, and Crossroads American Style IPA. By the way, they don’t filter or pasteurise, and let their industrious little friends, the yeast, carbonate the beer naturally during fermentation. 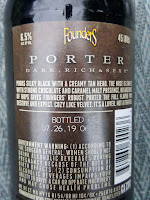 Co-Founders Mike Stevens and Dave Engbers opened the doors to the 9800 square foot Founders brewery in downtown Grand Rapids in 1997. But the years that followed were tough before the Michigan brewery’s rise to be one of the top rated in the world began in the opening years of this century.

Black is the expected colour of this “robust” porter and the head is coffee coloured. Sweet nose of malty chocolate and caramel. Silky on the palate, richly flavoured, sweetish, yet dry in the finish. Dark, Rich and Sexy, the label proclaims. Dark, Silky and Sweet, methinks. Perhaps a little too sweet for me. ABV is 6.5 while the IBU is 45.

By the way, you might like to try their Dark n’ Stormy cocktail, based on this porter. “This cocktail may look complicated, but rest-assured, even the least kitchen-savvy among us could recreate this with ease. Impress your friends and family this holiday season with this beauty.” All the details here

This stout is from the Heaney Farmhouse Brewery in Co. Derry. It is black, with a coffee coloured head that loses volume pretty quickly. 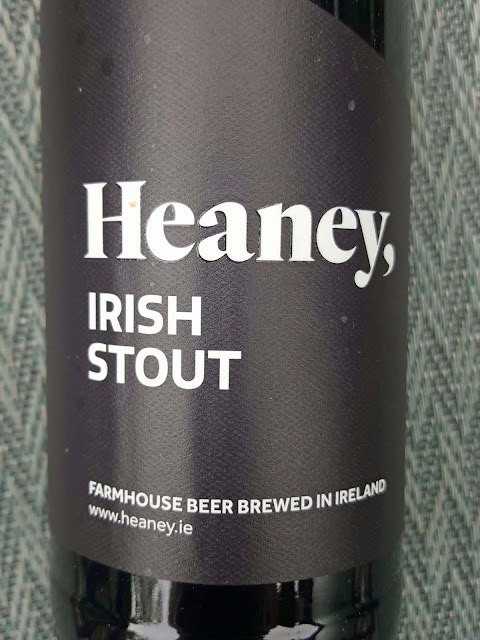 Stick your finger in the head and taste the coffee and chocolate which are more or less what you’ll get from the aromas. No oatmeal here but the palate is rich and smooth, caramel and chocolate and that roasted malt finish, a dry one also. Competition in the stout arena is quite stiff and this one is well up to the average.

Heaney’s always come up with food pairings and here they suggest slow-cooked meat dishes or a rich chocolate dessert.

Old Smoke was the nickname of John Morrissey, a boxer from Templemore (Co. Tipperary) - the home of White Gypsy - who gained fame and infamy for his exploits both in and out of the ring in the US during the 19th century.

Is there much smoke here? Not really, but you certainly notice it in the malty aromas which mostly feature coffee and chocolate. Colour is a shade or two short of a solid black; nice head (cream/coffee in colour) but doesn’t hang around. Lovely beer though with mellow roasted flavours, with malt more to the fore. Not like your usual stout but I could easily go through a session with this very distinctive one!

They say:  Traditionally, beers made in the midlands would have had a slight smokiness due to the malt being dried from peat fires, this stout brings out that combination of smoke & roast while remaining light on the palate. Beer is a fantastic ingredient to use in cooking (and baking). A family favourite is an Old Smoke Stout Stew.

Wikipedia: Smoked beer (German: Rauchbier) is a type of beer with a distinctive smoke flavour imparted by using malted barley dried over an open flame. The Rauchbiers of Bamberg in Germany, Schlenkerla in particular, are the best-known of the smoked beers.