A Quart of Ale± #25. Moving on over to craft . Another round of IPA

Did you hear? Fidelity, with Whiplash, is back in 2021. Dates, ticket details here.

Another round of IPA

When I was making hay, it was usually a bottle of the black stuff that was produced, more than just a bottle if we were threshing. But either way that was for the older fellows - we pale pioneer-pinned youths had to make do with tea and scones (pretty good too!). This County Laois farm do it differently.

This “Make Hay” session IPA from the 12 Acres Brewery has a lemon colour, a herd of bubbles galloping up through the haze. Aromas are citrus with a touch of clean pine. On the palate, it is assertively hoppy with a mix of peach, mango and the citrus enveloping that malt body and the finish is also hoppy.

This flavoursome easy-drinking IPA has more bite than you’d expect from a 3.8 abv, due to late hops additions (Citra and Amarillo). Other ingredients include their own pale ale malt, some oats and Munich malt. Put it on your session list!

Another well-made beer from the Co. Laois brewery where Our Land to Your Glass is the logo, based on the fact that all of the water used and some of the barley comes from the family farm. “The 12 Acres field on our farm is where we have been growing malting barley for the brewing industry for generations. Now we are craft brewing our own beer and we’ve named it after one of the fields where the barley is grown”. 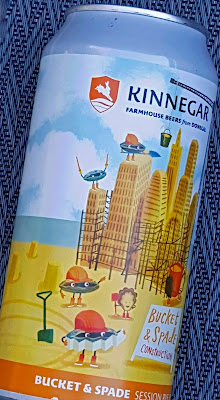 Colour is a foggy gold, white head fades away to a the barest of covers in no time, leaving the merest lacing on the glass. This easy drinking Rye IPA is unfiltered and naturally carbonated. You notice the rye influence in the aromas (touch of spice too) and also as you sip this fresh fruity (citrus) session beer from the Donegal brewery who have more than one rye on their portfolio. Fruit and bitterness are well balanced here and the malt too keeps its end up making it one of my favourites from the list, though not one of their core beers.

Nice little extra time bonus as the Ireland v Slovakia continues past the 90th minute and, after extra time, into the shootout. And then, suddenly, there was a little more bitterness than previously! C’est du sport.

This easy-drinking session IPA is pale and hazy. Pine and tropical fruit in the aromas. Those fruits along with bitterness in the palate and here the malts play a part in making this a well balanced beer. Under 4 per cent but a session beer with a flavour packed punch. Pretty much a perfect session drink.

This  is unfiltered and unpasteurised. Hops are El Dorado and Chinook while malts are Pale, Cara Ruby, Flaked Oats. IBU is 35

They say:Wicklow, because that is where we opened our brewhouse. Wolf, because the last one ranged freely across the Wicklow countryside, and because the hops we plant on our farm takes its name ‘humulus lupulus’ from that wild and proud creature. 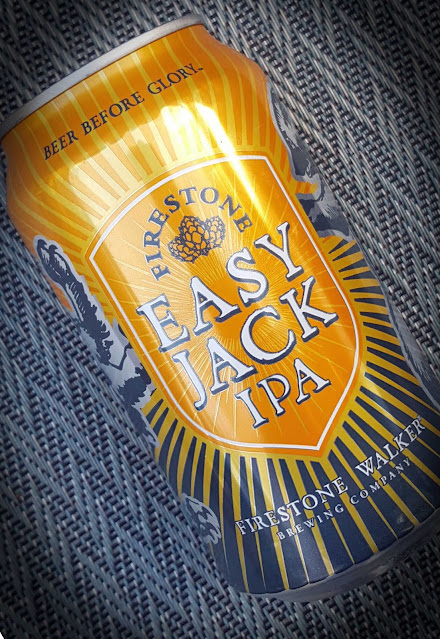 “Hoppy goodness with even more drinkability.”  Easy Jack’s got a light amber colour and a white head that reigns briefly.  It’s clear, so you see a myriad of bubbles rising. The bubbles don’t get get up your nose but the hop aromas do. Excellent balance in this can, terrific harmony between hops and malt, and a full body to enjoy as well. A good one but plenty of Irish IPAs are as good and quite a few better.

They say: Easy Jack is a different breed of IPA, brewed and dry hopped with a globetrotting selection of newer hop varieties from Germany, New Zealand and North America.

The story: Firestone Walker Brewing Company began innocently enough: two brothers-in-law—Adam Firestone and David Walker—debating the subject of good and bad beer. Their search for a decent local ale finally led them to brew their own starting in 1996. The original Firestone Walker brewery was located in a converted shed on the family vineyard. 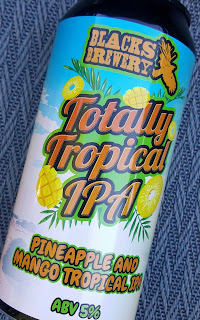 This 2020 release from Blacks of Kinsale is billed as a “beer with a totally tropical taste”. It “brings mango and pineapple to the party” and it does, for sure, certainly with the tropical aromas.

Perhaps, late in year, this IPA “perfect for a chill summer session”, is out of season.

IBU is listed as 55. While I was writing that last sentence the white head had vanished, leaving a slightly hazy golden liquid with bubbles crowding up towards the top.