A Quart of Ale± #22 Moving on over to craft. Golden/Blond.

Moving on over to craft.  Golden/Blond 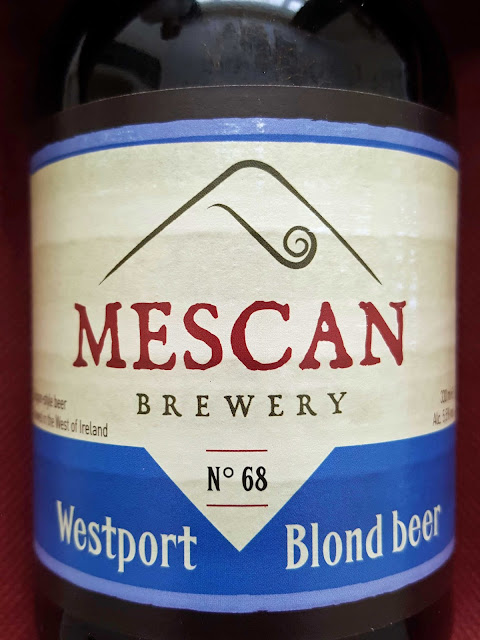 Golden Ales “are the ultimate European session beer and a great opening to the pale ale pathway” according to Craft Beer for the People. Yet many of these are more than easy-drinking as you can see by tasting some of the selection below.

This Mescan Westport Blond pours a lovely golden colour, quite an eye-catching white head too that tends to linger. One of the most refreshing beers around, its soft fruit and floral notes combining so well with the modest hops, all getting on very well with the malt in the background. All this harmony continues through the crisp and clean finish. They recommended serving at between four and six degrees - take heed!

“We only make beer that interests us,“ Mescan’s Cillian told me three years ago, “Beers that we like and find interesting. So no IPA, no Irish Red Ale. It is against our philosophy to follow a popular trend.”

That doesn't mean they don’t make popular beers! Their Blond was the first they brought out and has become a firm favourite with the public.

And one more thing about these beers, these mostly strong beers. The bottles carry a warning for lovers: “Our beer adds to the desire but may take away from the performance”. Caveat emptor. 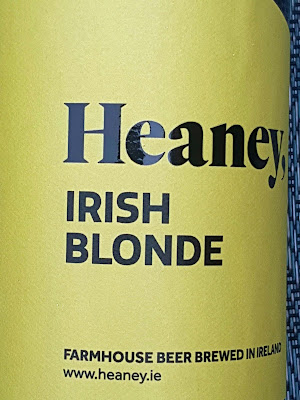 Heaney’s Irish Blonde (not all blonds have an “e” by the way) pours a mid gold with plenty of bubbles rising and a white head that lingers a bit. Citrus in the aromas, floral notes too and a mild spice. A finger test on the head - just dip and taste - reveals a slight bitterness and that, along with a touch of malt, is evident on the palate where the experience is generally crisp, clean and dry, dry right to the finish.

They recommended serving at 6 degrees, a degree or two down on the usual, and pairings suggested are with seafood and also a “refreshing partner to a hot curry or rich burger”. Enjoy!

They say: “Our beers are for after the graft. Rural thirst quenchers” They fulfil that task very well indeed. 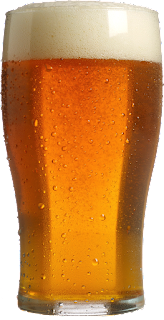 Refreshing, hoppy, citrus, malty, biscuity are the descriptors you’ll hear most in the chat about this beer. It has an inviting mid-gold colour and a white head that keeps it company for quite a while. Mild citrus elements in the aromas. Immediately refreshing, deeply so, just the job, superb mouthfeel as well all the way to the malty end. Another cracking beer from the Brehon.

They say: A refreshing, pale golden beer with a malty biscuity finish. Fabulous with white fish, shellfish, barbecue chicken or food from the Med, but equally as enjoyable on its own. Best served around 8 degrees. Our brewer has created a range of well balanced and flavoursome ales that reflect the changing face of the beer market in Ireland.

Refreshing, hoppy, citrus, malty, biscuity are the descriptors you’ll hear most in the chat about this beer. An impressive easy-drinking beer from a very impressive brewery. 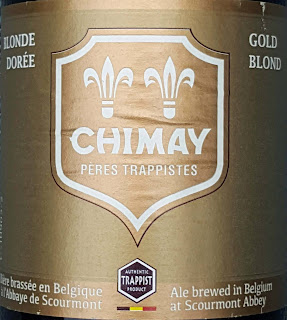 This Chimay, an authentic Trappist beer, has been made since 1966. The usual ingredients are used, plus the addition of sugar. Sugar? “All the sparkle of our beers comes from the transformation of sugar by our yeast, as has always been done traditionally. The refermentation in the bottle is a guarantee of quality.”

Colour is a light gold; it is clear, with plenty of that carbonation (thanks to the sugar).  Soft white head with staying power. Aromas hoppy and spicy, even notes of clove. When you drink, you immediately notice its refreshing qualities, deeply so, its terrific balance, its soft mouthfeel and the hoppy finish. They brew in the heart of Scourmont Abbey and the beer was for long reserved for the monastic community and its guests and staff. Now it’s all yours to try. Serve at 6-8 degrees.

If you are lucky enough to visit the brewery, you’ll find plenty of food to match the beer in their nearby restaurant. With travel restricted at present, you could do worse than try this recommended recipe: “ARTFUL SALAD WITH SCAMPI, TOMATO AND FENNEL”.  All the ingredients and method here. 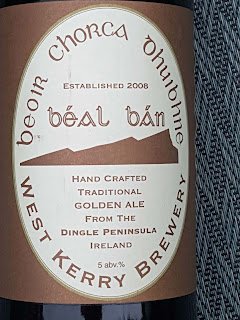 Gold is the colour of this magical ale from West Kerry. Its big soft white head is slow to go. Creamy rather than crisp, yet light and refreshing with malt sweetly prominent early on, the hops making a show towards the lip-smacking finish. A distinctive beer indeed, very impressive.

Gold is the colour of this superb Kerry beer with its big slow-moving white head. It is a light and refreshing golden ale with that slight malty sweetness and a bitter finish, imparted by a generous helping of hops.

Paul and Adrienne (Ireland’s first female brewer) use water from their own well to brew the beers, both cask and bottled. The malt is predominantly Irish and the beers are brewed naturally, with no additives or preservatives.

Beoir Chorca Dhuibhne is the Irish name for the brewery in the Dingle peninsula. It was established in 2008 to make traditional yet progressive beer. You’ll find them in their brew pub: Tigh Bhric (which also offers accommodation).