The day after Wine Australia hosted a webinar on the 2020 harvest, that very subject came up yesterday in the latest Zoom masterclass, organised by Liberty Wines. Two Australians, Michael Hill Smith (co-owner Shaw+Smith) and chief winemaker Adam Wadewitz, were telling us about Chardonnay and the differences between the Adelaide Hills (where their main vineyard is) and Tasmania where they now own the Tolpuddle Vineyard.

So how did 2020 go?
Adam said it was challenging but he had an amazing team “up for it”. “Frost early, rain at the long time, poor flowering and then the fires in December, fear of smoke taint”. Those fires came quite close but helped by the wind and advice from Australia Wine Research, the vineyard got through. While the yield was down, “the fruit was pristine, great flavour and acidity. We don’t have huge amounts in the winery but the wines are spectacular!”

Shaw + Smith, for thirty years, have had two vineyards in the Adelaide Hills, at Balhannah and Lenswood, totalling 55 hectares. The vineyards are planted to varieties that perform particularly well in the region, namely Sauvignon Blanc, Chardonnay, Pinot Noir and Shiraz. Now a third, at Piccadilly, is being planted.

In introducing Michael and Adam, Liberty Wines MD David Gleave said it was exciting how Chardonnay had moved from being big and oaky over the last 15 years. “Now there’s a huge diversity with regional characteristics.”

Michael put the development down to movement in many areas of winemaking but especially to a change of philosophy of winemakers away from the big rich oaky wines to something much more subtle and refined.

Adam admitted to being obsessed with Chardonnay. “We have learned along the way, moved the varietal to cooler regions, to cooler sites in those regions… more exposure to international examples has led to an evolution in style and so too has farming the right grapes (including Chardonnay) in the right places.”

Quite a few Australian areas now make a balanced Chardonnay (Margaret River, Yarra Valley, Mornington among them) with acidity part of the mix. Michael: “The fruit is still there but the winemaking is supportive, quiet.”

Michael continued: “Chardonnay has always been part of our story here in the Adelaide Hills but our first wine, in 1990, got away from us. Secretly we were a bit disappointed but five weeks later it was awarded White Wine of the Year!”

Adam: “Chardonnay had an amazing connection with the place, purity, acidity, and it was possible to refine it over the years. The new generation want wines to speak of place. We pick earlier to protect the acidity. I agree there has been real change, not only at Shaw+Smith.”

Is there a definitive Adelaide Hills Chardonnay character? Michael: “I think of a slight ripe nectarine. Not skinny but with mid-palate intensity, weight and length and acidity and that lovely stone fruit character, whereas Margaret River has more pear.”

“We use oak but don’t want to see it in the final wine, hard to explain that to accountants”, Adam joked. “We use it for oxygen, tannin, not flavour. Barrel size is a big thing. We used larger at Adelaide Hills but Tasmania is so good, small barrels are more suitable.”

Their move into Tasmania was not quite in character, according to Michael. “We are not easily distracted; we tend to focus on what works well and Adelaide Hills was successful. I’d heard wonderful things about Tasmania but had never heard of Tolpuddle until our visit. I loved the Chardonnay and Pinot Noir and three weeks later we owned it with no real idea of how to manage it!”

When Adam visited, he was struck by the extraordinary acidity (like Mosel or Chablis, according to Michael), the extraordinary intensity of flavour. “It is an exciting vineyard,” said Adam. “Great to work in Adelaide Hills and Tasmania, totally different regions and great to apply our understanding that the vines and the winemaking need a different approach.”

While the Tassie vines were well planted by professionals, the spacing could have been better. They got around that by the method of Layering. That doubled the number of vines which in turn allowed them manage each vine to produce half of the previous yield, so less stress on the individual plant. 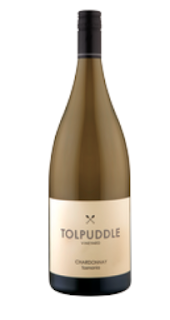 With Tasmania on the agenda, it was inevitable that someone would ask about sparkling wines for which the island is so well known. Michael, a big Champagne fan, said sparkling is 60% of the island’s production and that he really rates them. “We know how to make sparkling and Tolpuddle can do it with the Chardonnay and Pinot Noir. We know how to do it but I’m not convinced that we will.” And one got the impression that both men would tend towards making top notch still wines. Michael said Tasmania is an emerging place, “exciting stuff coming out” of there, even though it is just 1% of total Australian production.

The final questioner asked if an appellation system would help in promoting Australian wine.
Michael: “We do have very strong laws on defining regions and they are well policed. Don’t think Australians will be told what to plant where. Wine Australia does well with the current regime.”

Quite a few other topics came up over the 90 minutes and we may return to those on another occasion. For the present, we can rest assured that, with people like Michael and Adam leading the way, Australian wine is in good hands.


Links to Previous masterclasses in this current series, all recent: