Glad I Got The Glass Curtain At Home 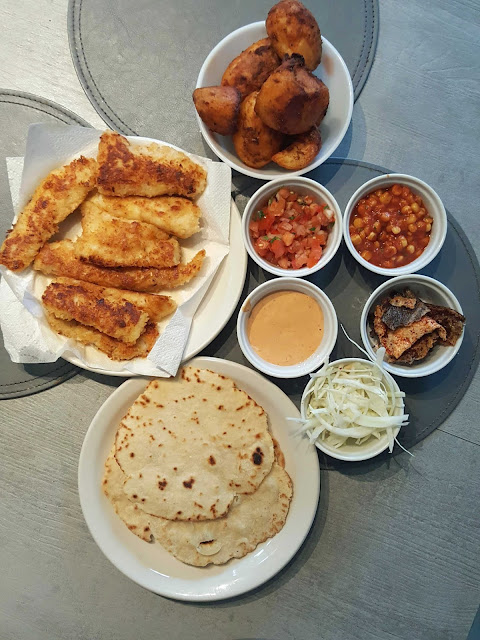 From Thursday next, MacCurtain Street’s Glass Curtain will be welcoming the public back into their lovely new (more or less) restaurant. Like many others these past few months, they have been serving up dishes via a call and collect system and I’m glad I gave it a try at the weekend. It was superb and also that bit different.

Cotton Ball Beers were available too and they also suggested a wine off their list: the lovely Verdejo by Bodegas Menade. And there was also the offer of their Pineapple Mezcal Margarita from the cocktail list. The drinks on the Saturday night were along the same lines with a Tempranillo from Castilla instead of the Verdejo. That red would have paired well with BBQ Brisket, house slaw, jalapeño cornbread, mac n’cheese  for two. Dessert: Chocolate chip cookies salted caramel sauce. On both nights, the Veggie Option was Veggie Tacos Panko.

In our case, there was, of course, a little bit of cooking to be done. The tortillas had to be rolled out and cooked in the frying pan while the patatas bravas were heated up in the oven. Simultaneously, the goujons were frying in oil, turning golden in no time. Indeed, the whole thing was ready in about 15 minutes.

And then we tucked into the feast, assembling the tacos with a bit of everything, the shredded crunchy white cabbage, the delicious grilled corn salsa and the tasty pico de gallo. The eight large goujons were top notch, the cod was a glistening white wrapped in its slightly spicy coating. No shortage of spicy bits but nothing too extreme once mixed in, not even the chipotle aioli and excellent spuds. And those fish skin chicharrones also added to the ensemble. Haven't had cod skin close to this since we enjoyed one on a baked white onion in Nerua, the Michelin starred restaurant in the Guggenheim in Bilbao.

Very happy with the Glass Curtain mains and we allowed a decent gap before tackling the dessert which had been in the freezer. And there was no letdown here either with the big tub of White chocolate and strawberry iced parfait. Very enjoyable and plenty of it, indeed so much that we left close to half for the following day!

The restaurant opened last December. Brian Murray and his team were doing very well indeed as we found on our January visit (check it out here). And then Covid put in a full stop. No wonder, they’re “delighted to be welcoming the public back into the restaurant from Thursday 2nd July. We will be starting with limited availability to ensure all possible steps are taken to protect patrons and staff alike.”  You may book your table now by visiting their website and clicking the reservations button here.

* Must say that our At Home (or Call & Collect) offerings over the past few weeks have all top notch. We stayed pretty local as we collected from Greene's, Micro's, and the Glass Curtain. Good Day Deli delivered and their offering was also of the highest quality. Best of luck to all the restaurants opening up this week. And do look out too for Call & Collect as these could well continue for some time to come.
The Glass Curtain