Champagne has faced many stern challenges over the decades. Climate change is the latest. And they are responding, according to Piper-Heidsieck cellar master Émilien Boutillat. But the response must be more than local. “It must be global,” he insisted during his Liberty Wines organised online masterclass last Thursday.

Émilien was introduced by David Gleave MD of Liberty who said climate change was an issue not just in Champagne but right across the world. “Émilien  was born in the heart of champagne. He has made wine around France, in Chile, in South Africa and in New Zealand. He has a global perspective, a scientific approach and is one of the rising stars of the wine world.” Not a bad intro at all!

The cellar master reported that, under blue skies, the vineyard was “in good shape” and that “the winery was busy also.” And then it was straight to business. A series of charts on temperature (including soil temperature), rainfall and so on left no one in any doubt that climate change has been creeping up on the area for decades.

Perhaps the most convincing was the one (above…) showing harvest dates. As you can see, from the 50s to the 80s, the vintage was mostly late September and sometimes in October. Not any more. Most now are in the earlier part of September with a few in August. And expectations, according to the Huglin indicator, could see Champagne having the kind of temperature that Montpelier now has by the end of the century. Not straightaway but, as Émilien said: “Even one degree is huge in wine.”

He outlined probable responses under two headings, one is “to adapt to the change” and two is “to be part of a global effort to reduce our impact on the climate”. In the Piper-Heidsieck case, there are two specific areas, in the vineyard and in the winery.

The viticulture response to the fight against Spring Frost, for instance, could see active methods (wind-machine, heaters, over-vine sprinklers) employed but Émilien prefers passive methods (Adequacy grape/terroir, row grass cover, delayed pruning) because the impact of the active methods on the environment “is too big”.

So what about hail storms? “We cross our fingers!”. “Some hazards though are local, we get grapes everywhere in Champagne.” So if a few growers are hit by hail, more than a few will have no such damage. They encourage their partners (the growers) to farm more sustainably also.

Piper have been certified by two organisations for their drive towards sustainability and biodiversity. “We think outside the box… have more resistant grass between the rows… employ responsible viticulture. .. We do better every year.” Piper have water and gas management systems, recycling 100% waste from house vineyard, limit fertiliser use, zero insecticide, zero herbicide and more.

Then there is canopy management, maybe wider distances between the rows, maybe new grapes (Arbanne, Petit Meslier). Seven grape varieties are allowed in Champagne though basically just three (Chardonnay, Pinot Noir and Pinot Meunier ) are used. While the big three grapes seem to have bene there forever, in the 17th century, the grapes used for Champagne were Gouais and Fromenteau. Who knows what will happen in the long term? During the Question and Answer session, Émilien said there are currently small amounts of the other grapes but “when you plant a vineyard it is for 50 years. It (replacement) will be slow, takes time, more for the long term.” 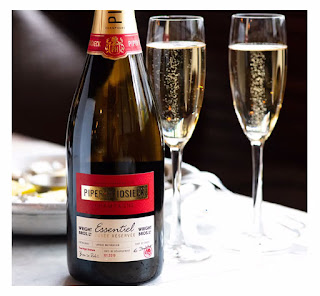 They support local and have invested in a local start-up to produce robots for vineyard operations. This one has wheels though and looks like a small bus. “It is electric and can find the start of the row automatically and then do the weeding along the sides. We really believe in it.. all the growers can benefit.” It does what the old farm implement called a scuffler used to do but much more efficiently by the looks of it.

The winemaking response will also be over a number of different fronts. The harvest date will be one and that will involve tasting, tasting, tasting. “Don’t just look at the numbers.”  Cooler terroir (within the area) may well come into play. As may Pressing Juice Splitting (to help with acidity). Malolactic fermentation may be blocked to enhance freshness in the reserve wines. Indeed, reserve wines from cool years, such as 1996, 2007, 2008, and 2013, could become ever more valuable. Dosage is the last step of the process and there is scope here to change the amount of sugar and in the choice of reserve wine.

Q: Will you be looking to produce different wines in the future eg still?
A: Champagne is known for sparkling wines, it is our history, our goal, our style is all about sparkling. I hope in a 100 years it will still be sparkling.

Q: Are you looking at England, or elsewhere?
A: I like making wine abroad. Champagne has great terroir, nice diversity, so lucky here, so I want to concentrate on Champagne. English sparkling wine is good and you don’t need a French winemaker to show you how!

Q: How do you convince new suppliers to work with you?
A: First we want to keep and work with our current growers in long-term partnerships, it takes time, takes years.

Q: Do the growers follow your guidelines?
A: There is external checking on their sustainability practices. We meet them fairly often ourselves. I go into the vineyards, close to them and sharing time and being on the ground with them is the best way.

Q: There were a few questions about going organic. 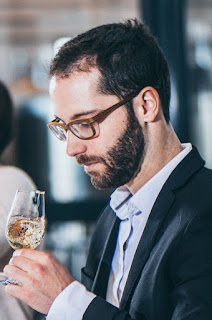 A: We are in sustainability not organic. But not a big difference between what we do now and organic, no pesticide, no herbicide. It is trickier here because of the weather (rain in particular). We are always experimenting, plenty of good things to take from different methods, but no dogma! We continue to improve sustainability with our partners.

Q: Will climate change force a shift in the boundaries of Champagne?
A: So far, no. The soil is part of it, so far we stick where we are. Again it is very long-term, as vineyards are planted for 50 years.”