May 13, 2020
Wine Maestro Aurelio Montes
Takes It To The Limit One More Time

Aurelio Montes, noted as one of the pioneers of top class Chilean wine, is taking it to the limit one more time. “If you don’t go to the limit, you won’t know what you can achieve,” he told us on last Tuesday’s Liberty Wine organised masterclass. Thanks to the magic of Zoom, Aurelio (wearing beret and poncho) was talking to us from a cool southern Chile on his way to the Chiloé Archipelago to check on his latest vineyard, this one on an island.

“I have known Aurelio for 7 or 8 years,” said Liberty MD David Gleave as he introduced him. “Known of him for much longer. He is always looking out for new areas, always pushing the barriers. It gives his wines an extra dimension. He is still full of energy and enthusiasm and a man of great knowledge.”

Aurelio said he was always seeking quality through innovation, never afraid to employ new technology. “Happy we have achieved so much. I enjoy too much what I do.” And then he took us through his Chilean vineyards. (He also has an international presence).

He has had an eye for a good location from his university days. As a 21 year old he visited a place (150km south of Santiago) and began to dream of making vine in Apalta. “Time went on,..” before, years later, with his partners, “we bought a bit of land”. “We planted the vineyard and were totally correct. The quality was amazing. Then we started planting on the hillsides and the neighbours thought we were crazy. Year by year though it was good - for Syrah, Carmenere, Cabernet Sauvignon and more. Then we started getting noticed.” And Montes began to grow - they have no less than three pages of wines in the Liberty catalogue.

“I’m a moving kind of guy.. never stay still.. just can’t stay in one place. Why not move to the coastline?” And so they did, to Marchigüe. “Just 6km to the coast, more gentle slopes, a rolling landscape and the temperature of course is more coastal. .. mainly reds but a little Chardonnay, Viognier. Results here were even more encouraging, wines with character and personality, really fantastic. We are now trying Touriga Nacional, Tannat, more. We were the first ones there and it’s been an amazing experience. A beautiful place. I take a look every week and I never get tired of it.” 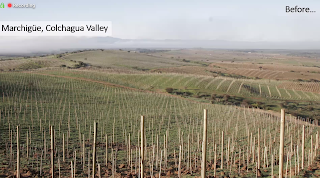 And the coast was the draw again for his next move, to Zapallar “an expensive summer resort, in the Aconcagua Valley”. They were by the sea but there was a lack of water, a worldwide problem due to climate change, he said. “So thinking of the future, we started a programme of dry farming, we built a reservoir and we have two deep wells and deliberately keep the yields low. Results are great, fantastic concentration, great expression and personality plus acidity. It’s been a wonderful challenge, a big vineyard and we are always exploring”. And they’ve had success with Pinot Noir, Sauvignon Blanc and Chardonnay. 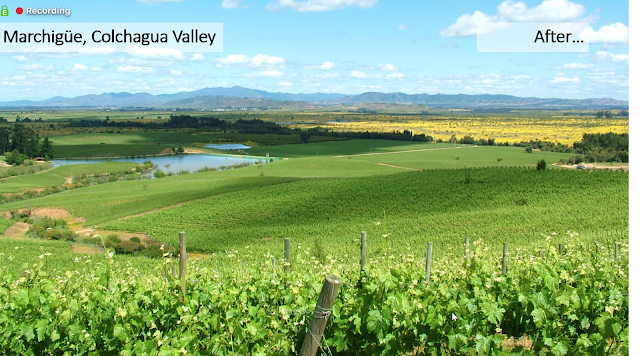 “It is totally coastal influenced. In morning there’s mist and fog and then a shy sunshine from mid day. The vines grow happy. The grapes ripen slowly.” And you can find these coastal beauties in the Outer Limits range, also imported by Liberty. Aurelio was sipping the Pinot (possible best in Chile) as he spoke.

As he said, they are always exploring. He is delighted with the “little bit of Syrah, looking fantastic, a lighter coastal wine, lot of character and freshness.” And David Gleave endorsed that opinion.

“We are fearless,” continued Aurelio. “We don’t stop always trying things.” Albarino is next on the list. He related how he was in Spain about 3 years back and “fell in love” with Albarino and “is moving some here as Zapallar is like Rias Baixas”.

Coastal viticulture has been good to Aurelio and so the next logical step for this regular yachtsman was to set up on an island and he found it in Chiloé, 1200km south of Santiago. “You have to go to the limits to discover how far you can go! It is beyond the viticultural limits.” 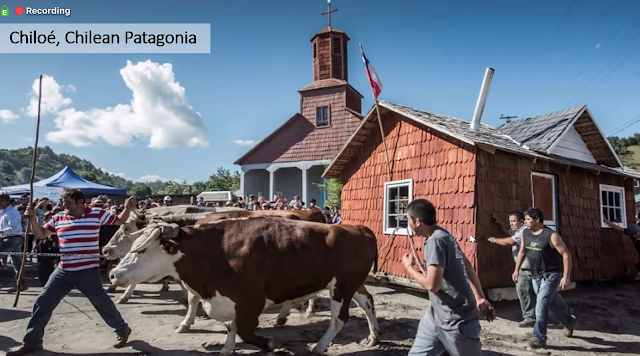 You’ll often hear of the cooling influence of the Humboldt current off the Chilean coast. Fortunately, for Aurelio, the current doesn’t get in around the Chiloé Archipelago and so the temperature on the islands is a few degrees higher than you might expect! Otherwise it would probably be too cold for the vines.

“The soil is volcanic, one metre deep, fertility not that big. There are 120 inhabitants, 10 kids in school and there is a culture of fishing. We decided to plant seven varieties.” That was in 2016. No harvest yet but 2021 will tell what the Mechuque vineyard (which runs down to the sea) is capable of. Knowing Aurelio’s record, you wouldn’t be betting against him!

* All pics are screenshots from the masterclass.