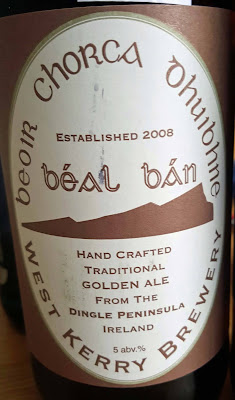 You savour the minutes you spend drinking this Golden Ale. It’s the languid time in summer: you have a glass in your hand and the sun is going down. Not quite there yet. Hanging on. Between pale and dark. Those golden moments. When the Blaskets and its seagulls are in silhouette.

Sip and savour and put your arm around his or her shoulder. And whisper: “This is the best golden ale in the world”. And, if she or he is sipping the same paradisiacal beer, there’ll be no argument. For what you both are enjoying in these magic peaceful twilight minutes is truly the umami conjured up by the goddess from the Ballydavid brewery of the wild peninsula. Béal Bán, an beoir órga is fearr ar domhain. Draíocht an Daingin.

Gold is the colour of this magical ale from West Kerry. Creamy rather than crisp, yet light and refreshing with malt prominent earlier on, the hops making a show at the finish. A distinctive beer indeed, very impressive.

I drank this in 2012 at Blair’s Inn and also during a visit to Tigh Bhric where the brewery is based. It was then being described as a pale English style bitter. It was then, still is, a light and refreshing golden ale with a slight malty sweetness and a bitter finish, imparted by a generous helping of hops. Indeed, one could see why the English aficionado would feel at home here.
Paul and Adrienne (the brewer) told us that they use water from their own well to brew the beers, both cask and bottled. The malt is predominantly Irish and the beers are brewed naturally, with no additives or preservatives. By the way, they use local botanicals in the brewing, such as rosehips, elderflower, blackberries and black currants “added to our seasonal beers”.

Beoir Chorca Dhuibhne is the Irish name for the brewery in the Dingle peninsula. It was established in 2008 to make traditional yet progressive beer. You’ll find them in their brew pub: Tigh Bhric (which also offers accommodation). .

Béal Bán is one of their core range and like the others, Carraig Dubh (porter) and Cúl Dorcha (red ale), is called after local place names. Adrienne is Ireland’s first female brewer.

Elbow Lane Elbow Lager, 4.4%, 500ml bottle
Light gold (cloudy), fountains of bubbles rising, nice white head stays for a spell. Mild aromas. Refreshing on the palate, sharp citrus led flavours reaching the parched parts. I was impressed with the early version of this lager, in 2012, and impressed with this 2020 edition too. Best served at 7-8 degrees.

All the Elbow Lane beers are relatively lightly hopped, mainly because of food matching considerations. With five restaurants in the group, you don't want an over-hopped beer upsetting the food flavours.

This continental style lager is particularly refreshing and owes its flavor to Pilsner and Munich malts and "Noble" hop varieties imported from Germany & Czech Republic. It will complement most lighter dishes, a great treat for beer lovers.

They say: We’re really proud of the beers that we make here in our tiny brewery. There are no additives and we proudly brew according to the principles of the German Purity Law which means that we use four ingredients to make our beer. We hope you enjoy. 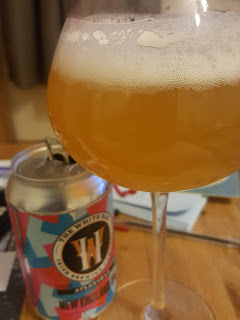 A beer from the north west with an eye to the next parish across the foamy ocean.

A cloudy light gold, but cloudy, is the colour here. Lovely fluffy head but soon there’s little left of it (the head, that is). It’s juicy and fruity for sure, with a creamy mouthfeel, the hops slightly subdued but still a notable presence. Excellent balance though and this smooth ale finishes well and certainly has that second-can appeal. New England may be a long way off but this lovely ale is easily found locally. Go for it!

They say: Drink this beer as fresh as possible, when all the Alpha & Beta oils from the hops are the most powerful. Little to no hop bitterness at the end, utilising hops that impart a tropical, juicy sweetness rather than the classic bitter. 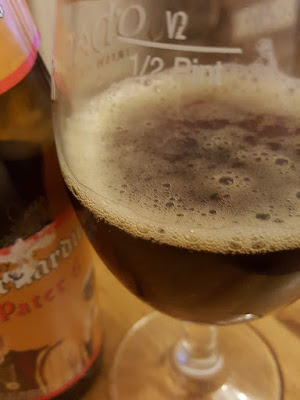 It’s a dark brown colour, not quite the chestnut they say on the website. The foamy head is off white and it soon contracts to a very thin cap. A touch of coffee in the aromas. And coffee hints too amidst the fruit on the palate. Time and again in these high abv Belgian beers - and this is far from the highest - you find a delicious harmony between the alcohol and the flavour, and that harmony here extends to the finish.

They say: St. Bernardus Pater 6 is brewed according to the classic dubbel style with a recipe that dates back to 1946. The name of this beer has become a reference for its style, and it is commonly referred to as ‘een Paterke’.

As ever the Belgians recommend a food pairing: St.Bernardus Pater 6 is a great choice to complement pork recipes or contrast against zesty cheeses. It is bottle fermented and best to serve it at 8-12 degrees.
If you come across the Pater 6, and if you see The Bernardus Abt 12 on the same shelf, then don’t hesitate. The Abt 12 (10%) is a quadrupel, full of complex flavours, great fruit and with a superb finish. It is regarded as one of the best beers in the world. In this context, quadrupel means it is stronger than a tripel which is stronger than a duppel like Pater 6!