Wine Duo Charles and Charl tell us about their Qvevris in the Swartland! And much more about this hot dry wine region of South Africa.

May 15, 2020
Wine Duo Charles and Charl tell us about their Qvevris in the Swartland!
And much more about this hot dry wine region of South Africa.

The Swartland is 65kms north of Cape Town. The climate is hot and dry. Viticulture here it is not straightforward, according to Fairview and Spice Route owner Charles Back. “You have to be very careful to select good moisture retaining soil in the first place, soil that can trap the moisture and slowly release it later when needed.”

“We monitor winter rainfall very carefully and if the rain isn’t enough, the yield must be cut. We use bush vines and the canopy has to be managed.”

Charl du Plessis, the winemaker: “Your grape variety selection is also very important. I’d love to do Pinot Noir but no way here. Must look for new varieties, also with climate change in mind.”

Dry conditions significantly reduce the risk of fungal diseases and make it easier to go organic. Charles: “We had been asking ourselves how to add value when the yield is down and organic is the answer. We have the attributes that lend themselves to organic.”

Charl: “This is our third year of conversion, also a learning curve for us and hopefully we’ll see the benefits. I reckon that in 10 to 15 years time, most producers in South Africa and worldwide will be growing organically.” 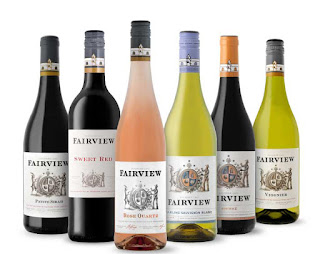 "Without [Charles Back]…the Swartland would still be regarded as a rural backwater" wrote Tim Atkin, who awarded the winery 'Cru Bourgeois' status in his South Africa Classification in 2019. And Liberty MD David Gleave endorsed that opinion as he introduced the “double act” from the Spice Route and Fairview vineyards in a ‘backwater’ that has been transformed to a globally recognised hot spot for premium South African wine.

Amoskuil, their farm in the Swartland where the cellar is and the majority of the vineyards are, is in its final year of organic conversion. If all goes to plan, most of the Spice Route wines from the 2021 vintage and beyond will be certified organic.

Winemaker Charl told us about another “surprise” development here, their importation of 20 qvevris from Georgia. But first Charles: “Again, as part of our drive to add value, we are always on the lookout and when I got a chance to go to Georgia, I said ‘let me go!’. I was blown away, over 500 indigenous varieties and a biblical style of wine-making.”

So blown away was he that he ordered the first batch of ten qvevris. “I hadn’t tasted wines like this before. I was thinking if I could apply very precise modern methods to the process, I could do well."

Charl went there in 2018 and did a vintage. “It was a big challenge for me and I learned a lot. No chemicals added, all done naturally, white wines on skins for six months, red for three years!”

A qvevri is huge earthenware amphora (800 to 1200 lts) sunk into the ground and used for wine fermentation and storage. The hand-made terracotta pots have been fired and coated inside with beeswax.

Back in Swartland, the qvevris have been installed underground and the duo seem determined not to have the extended maturation of the Georgians. “Probably a bridge too far for the average winemaker, somewhere in between. There’ll be a focus on cellar hygiene the whole time, that’s vital.”

Their Georgian Qvevri are built into the cellar at Klein Amoskuil in Malmesbury!
Charl: ”They are filled with blends, one white, one red, and all the grapes are organic, all sustainable. It’s the total opposite of normal, especially for the white. We ferment on the skins, extract a lot of tannins which yield more anti-oxidants and that helps prevent spoilage and the colour is amber or orange. The way to go!”

“It is an acquired taste but has a big following around the world, with the younger age group engaging and more into it.  Great food wine.” Charl sees a big future for these wines and is very positive about them. Look out for them under their Obscura label.

Q: Viognier in South Africa?
A: The high cropping level is a problem, need to manage the canopy. Treat it as a red grape early on, the aim always to get the correct balance between the alcohol and the tannins.”

Q: Pinotage? Like it or don’t like it?
A: Charles says he sees a big future for it but not the old style wine that some of us outside of South Africa are familiar with. “If you really apply yourself to Pinotage, you can make a very good wine from it, more fresh, juicy, flavoursome. And it is ideally suited for Mediterranean style rosés.” And he went on to say that there is still a lot to discover from Chenin Blanc, that there is the possibility of getting a broader range of wines from it.

Charles and Charl are quite a duo but how did they end up together. Charles was on the lookout for good terroir in the Swartland and was tasting Chardonnay in the local cooperative, an influential one. It was “amazing” and he followed up by going to the grower and buying the farm at Klein Amoskuil.

His first wine-maker left to open his own business a few years later. Charles had already noted the prowess of Charl. “He was always winning competitions and so I said if I cannot beat him, I’d better get him to join me.” And so they ended up working together at the end of the 2001 in time for the fourth vintage at Spice Route and have been making wine, and jokes, together since then.