Kinnegar White Rabbit Session White IPA, 4.5%, 440ml can
Citrus leads here and there is little enough evidence of the clove and banana that is prominent in some wheat beers in this mid-gold  cloudy IPA from the innovative Donegal brewery. There’s a generous fluffy white head that lasts a fair bit.

Big score for the optics and no let-down in the mouth where the malt and hops get together in an impressive juicy fruity amalgam. A lovely balance indeed and an excellent dry lip-smacking finish with a slight bitterness in evidence. Second can appeal for sure and the session is underway!

They say: This is a classic American wheat beer that blends fruity malt with fruity hop flavours and opens them up with a voluminous, puffy white head.

Like most of the new wave of independent Irish brewers, Kinnegar still have a few years to go to their 10th anniversary. Yet there is something so real about the overall character of their Donegal beers that the word authentic (a sense of place, a sense of the genuineness behind the local enterprise) surfaces as you sip.

“We don’t filter or pasteurise, and we let our industrious little friends, the yeast, carbonate the beer naturally during fermentation.” There may be a bit of sediment, so pour carefully but if some ends up in the glass, don’t worry about it. 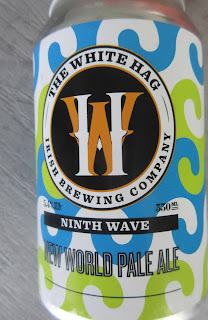 Like their Donegal counterparts, Sligo’s White Hag have also turned towards the Atlantic for this New World Pale Ale, named after the (mythical) Ninth Wave that formed a formidable barrier for anyone wishing to cross over to New York and Boston.

Colour is a bright amber, no shortage of bubbles rising through the mildly clouded glass, topped with a short-lived white head. Aromatics are mild also, apricot, mango and citrus in there.

Quite a greeting on the palate though, creamy feel and insistently fruity from the American hops but all is kept in check as this balanced effort makes its way towards a very satisfactory finalé indeed.  Lively, flavourful and very drinkable indeed. Another for that second glass designation!

They say: “We are a modern independent craft brewery from Sligo, on Ireland’s Wild Atlantic Way. We brew innovative and groundbreaking beers, inspired by ancient and classic styles.”
They brew a good lot of them! The able and masterly brewers here ensure a lot of them are good.

No secret that the crew of Mitchelstown’s Eight Degrees are an outdoor lot. So no surprise that they choose to celebrate Ireland’s highest mountains - Irish Munros are peaks over 3,000 ft. including their local Galtymore - with their latest series of specials. And #2 in their adventures at altitude is Lugnaquilla, yet the beer is named for the Glen of Imaal, the valley below the Wicklow peak.

Colour is a pretty clear amber with a white head that stays around for a spell. Aromas are shy (if exotic) but it’s a different story in the mouth where the intense flavours, citrus prominent, are wrapped in silky mouthfeel,  a balanced thirst-quenching drop, as they say themselves, and a fitting reward after a climb up (and down Lugnaquilla) or the steps up to the barbecue. Slainte!

They say: The star of the show is new hop HBC-692, daughter of Sabro, with intense flavours of grapefruit pith and pine resin. The oats provide a silky mouthfeel which, when combined with these aromatic hops and a rounded bitterness, provides a balanced thirst-quenching drop after a rewarding climb up the Wicklow massif.

By the way, Eight Degrees are close to unique among Irish brewers in going to some length to suggest Food Pairings for their beers. The Belgian breweries seem well into this but even they would find it assez difficile to match the culinary expertise of Caroline Hennessy whose suggestions follow. I wonder is the co-author of Slainte preparing for a revised edition! (I think I’ve dropped that rock down the well before; there was no splash then!)

“The fruity notes in this would play very nicely with a blue cheese like Cashel Blue. Even better, put a slice of that cheese on a burger and see how Glen of Imaal Oatmeal Pale Ale works with a juicy burger: the fruity hops have enough bitterness to balance out all the blue / meaty umami flavours. Spiced mushroom tacos are a great match, the tropical notes in the beer complementing the flavours in Mexican food. Bring a citrus cake – lemon and buttermilk cake or orange polenta loaf – to the table and see how the flavours work beautifully together.” 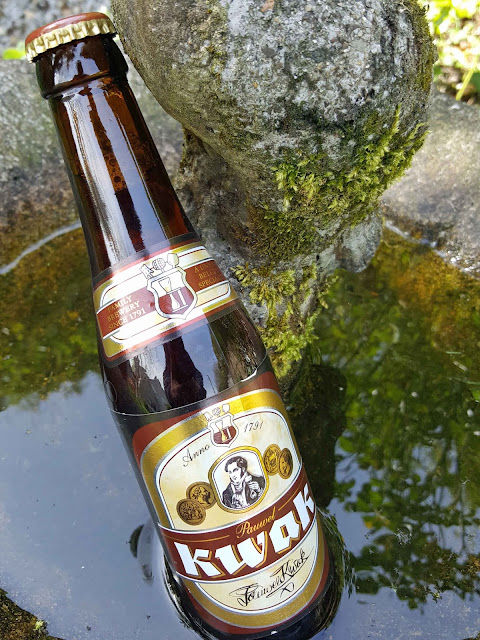 This a beer that, once tasted, you cannot ignore. No more than you can ignore a pebble in your shoe. The Kwak though is much more of a pleasure. Belgian beers have considerable clout and sometimes the less worthy among them get a free pass. We had the Kwak’s companion, the Tripel Karmeliet  here recently - and this one, just like the Karmeliet, is worth the admission.

It is a “Heavy Special Amber” and dark amber is the colour, the coffee coloured head is less than full but is inclined to hang around a fair bit before thinning to a lacy disc. Aromas are of the warm earth, some coffee notes in the background. It has an amazing palate, complex, malty, toasty, caramel, yeasty and warm. More or less seamless from there to the finish. Unmissable!

In common with all Bosteels beers, it is brewed with natural basic ingredients: barley malts, mineral water, wheat, hops and white candy sugar.
In the 18th century there was a very well-known brewer in the Dendermonde area; his name was Pauwel Kwak. He brewed his own beer, which was dark and heavy.This story inspired a brewer from nearby Buggenhout and since the 1980s the Pauwel Kwak is brewed by Brouwerij Bosteels, which also produces the popular Tripel Karmeliet and the DeuS Brut des Flandres.
They say: This beer is a worthy dining partner and also has its uses in the kitchen. It will make a perfect pairing with, for example, pigeon and pickles. You can have both at the same time thanks to the Kwak’s fine caramel.This complements the zesty taste of the pickles and softens it slightly so it will not overpower the pigeon.
beer Belgian Bosteels Eight Degrees Irish Kinnegar The White Hag