May 03, 2020
Half-day Tour in West Cork? Now we can dream a little.
Baltimore Beacon, Coffee Shop at Uillinn, Leap Waterfall

It’s a Friday and we’re heading west for a night, long booked at a bargain rate, in the Celtic Ross Hotel. The weather is dry and often bright so we leave a little early and eventually decide on a trip to the famous Beacon of Baltimore.

Plan was to arrive in Skibbereen around lunch-time with a visit to the Coffee Shop at Uillinn (which houses the West Cork Arts Centre and is popularly known as the Rust Bucket). I know that Jessie and Billy, who previously ran the operation in Union Hall, have transferred here.
No bother finding parking in the town, indeed there are a few spaces available in the very central lot where the Saturday morning market is held and it’s free. We can see the “rusty” sides of the high-ish Uillinn from here and take an easy stroll over.

It is a small café with a good sized outdoor space for the better days. And there were a few hardy souls outside. But we headed in and Jessie, who told us they are edging towards their first anniversary here, filled us in on what was available. It is a small enough space, no kitchen area as such, but they make the best of some excellent local produce.

There are a few eye-catching light fittings around, including one colourful globe by the window that reflects some of the buildings across the way. But the most eye-filling piece of all is a large painting of the local Reen Pier area by artist John Kelly. In a few months this will be auctioned at Sotheby’s with the proceeds going to CUH and West Cork Rapid Response.

There is quite a choice: Sandwiches, Salads, Toasties, Frittata, Quiches, and more are on the menu, much of it chalked up on boards. Our order soon arrives. I am delighted with a toasted sandwich featuring Gubbeen ham and cheese and the delicious salad that comes with it. Much the same salad is with the well-made Frittata (CL’s choice). And we each enjoy a bottle of lovely Attyflin Estate Apple Juice. We did a bit of sharing and we agreed that the sandwich was one of the best of its kind that we’ve come across in recent years.

Back to the road then and into Baltimore. Fairly used to seeing it in summertime but I’ve never seen it as quiet. We don’t drive all the way to the Beacon and give ourselves a short walk. There’s a fair bit of mud and water at the start of the climb but we do stretch ourselves a bit to make it to the plateau!

The white painted signal tower at the entrance to the harbour is Baltimore's famous landmark. Jokingly, it is sometimes also called Lot's Wife by the locals, an allusion to the bible, where Lot's wife turned into a pillar of salt.  It was built sometime in the 19th century. Various dates are mentioned but there seems to be some consensus that, in its present form, it dates from 1849 or thereabouts! 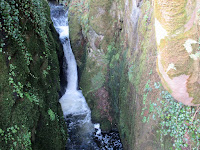 The views are well worth the climb, cliffs and sea to the left and right,the ocean and  Sherkin island ahead (a bit to the right) and the town and harbour behind.  We do find an easier way down but there’s still the odd slip or two and one of us gets a muddy behind!


Back to the harbour car park then. In the toilets, we see the first of those yellow Covid-19 safety signs - we would see them again in the hotel later on. A stroll around the village is next and we take a peek at the Customs House where work is going on inside in preparation for “a new concept” with an opening on March 19th (three days a week for Michelin chef Ahmed Dede and his team for a start). But that opening was knocked out (temporarily) by Covid19 but they did get going with a very popular takeaway service. Better days ahead!

We skirt around Skibbereen on the way back and soon find ourselves in Leap. I spot the sign for the local waterfall. We’ve never seen it, so we park up on the street and head in the few yards. No charge but you are asked, via a notice, for a donation. After the recent rains, the water was flowing quickly down the narrow channel but the whole thing is on the small side.

According to Wikipedia, the town’s full Irish name means "O'Donovan's Leap" and is derived from the story of a chieftain called O'Donovan, who was pursued by English soldiers, but escaped them by jumping across a ravine and its waterfall. A local website says “an O’Donovan leaped on horseback while being pursued by British soldiers”. Check it out here.


After that, it's an easy drive back to Rosscarbery and to the Celtic Ross, our marvellous base for the night where we had a five star dinner. Read all about it here.