Best of Beers. Another Belgian-Irish Round #2

This ale, a popular regular since they started brewing in Baltimore, pours a cloudy amber, with a tint of copper, and a soft white head that doesn't last too long. Citrus in the aromas. Makes quite an immediate impression on the palate, fresh and lively, sharp citrus notes again, pineapple and passionfruit too, more malt than hops, just lightly bitter. Quite a distinctive mouthful. Refreshing and quite a thirst quencher.

Hops used are: Columbus, Centennial, Galaxy, and Liberty. It is unfiltered, unpasteurised and vegan friendly as only whirlfloc (Carrageen moss) is used to aid the clarification. And they use their own spring water in the brewing process.
I was one of the first to enjoy this beer in Baltimore a few years back, sitting out on the old rustic seats and tables of Casey’s Hotel (where the brewers are) with a great view over the waters. Hard to beat! In recent years, my favourite West Cork Brew beer is the Roaring Ruby red ale. What’s yours?
The brewery recommends pairing this Pale Ale with Fish, white meats, mild cheese and salads.
White Gypsy “Old Smoke” stout 5.4%, 500ml bottle 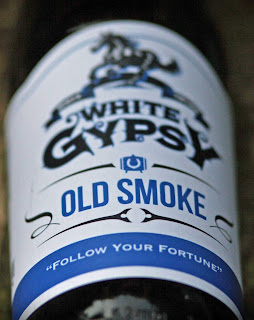 Old Smoke was the nickname of John Morrissey, a boxer from Templemore (Co. Tipperary) - the home of White Gypsy - who gained fame and infamy for his exploits both in and out of the ring in the US during the 19th century.

Is there much smoke here? Not really, just a hint (morning after the night before maybe!) in the aromas. Colour is a shade or two short of a solid black; nice head (cream in colour) but doesn’t hang around. Lovely beer though with mellow roasted flavours, with malt more to the fore. Not like your usual stout but I could easily go through a session with this one!

They say:  Traditionally, beers made in the midlands would have had a slight smokiness due to the malt being dried from peat fires, this stout brings out that combination of smoke & roast while remaining light on the palate. Beer is a fantastic ingredient to use in cooking (and baking). A family favourite is an Old Smoke Stout Stew.

Wikipedia: Smoked beer (German: Rauchbier) is a type of beer with a distinctive smoke flavour imparted by using malted barley dried over an open flame. The Rauchbiers of Bamberg in Germany, Schlenkerla in particular, are the best-known of the smoked beers. 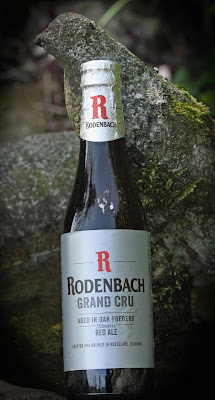 This red brown ale from Flanders has been matured in oak casks, not unique but quite unusual, and indeed the Rodenbach brewmaster Rudi Ghequire says its owes its “complex fruitiness to its lengthy partial maturation in wooden oak casks”.

The sourness in the aromas is repeated on the palate and, if you’re not prepared for it, you might well throw your hat at it at this stage. Someone here has joked that a citron pressé would be a better drink. But remember, it is “probably the most award-winning beer in the world”. So pay a little heed, a little respect!

Soon, at least for me, that complex fruitiness begins to assert itself, both on the palate and all the way through to the finish and you realise there is much more to this than the obvious sour character. Sour comes up quite often but I’m pretty sure the word doesn’t appear on the label (lots of tiny print though!)

The Rodenbach Grand Cru sour red/brown at 6%, is a blend of 1/3rd young beer and 2/3 of beer aged two years in large oak vats, giving fruity taste, complexity and intensity. It even has its own AOC. It takes over two years to make (even the angel’s share happens here and they know the good things) and the young beer is added to restart fermentation.

Sip by sip, it is becoming more approachable! Patience is a virtue, especially if you are new to this style. By the way, Caractere is another outstanding beer from this brewery. But take it one step at a time. 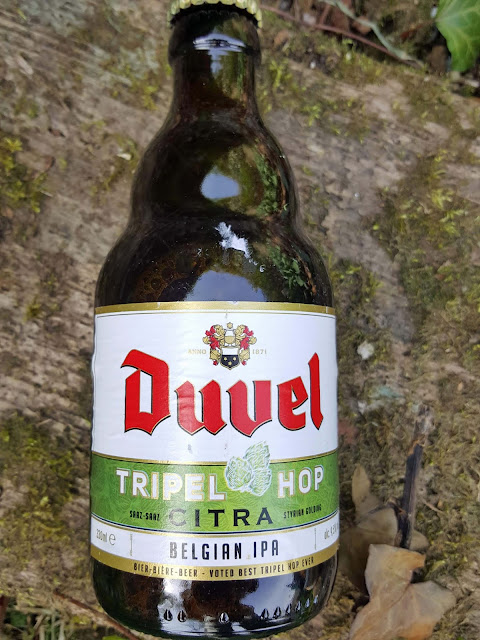 This pours a cloudy light gold, with an attractive white head. Looks like an IPA and smells like one too, citrus mostly with hops there also. Rich concentrated flavours, mostly tropical, flow across the palate, a subtle bitterness in the mix, and a hint of the high alcohol, yet all the elements combine in a very pleasant harmony indeed and those that didn’t fancy the Rodenbach are more than happy with this beauty, a gem from more familiar territory but still a gem. An unanimous thumbs up for the folks at Duvel!
Duvel is a natural beer with a subtle bitterness, a refined flavour and a distinctive hop character. The unique brewing process, which takes about 90 days, guarantees a pure character, delicate effervescence and a pleasant sweet taste of alcohol.
Ever since 2007 the brewers at Duvel have been busy innovating with a third hop variety to give Duvel a surprising twist and some extra bitterness. Each spring this results in the launch of a unique Tripel Hop, which complements the rest of the Duvel range.

For this 2016 Duvel Tripel Hop, they used the aromatic hop called Citra. Citra is grown in the Yakima Valley in Washington and enriches the flavour palate with fresh hints of grapefruit and tropical fruit.

It takes a while for this beer to mature. It is only after 90 days, when it has achieved its rich range of flavours, that Duvel may leave the brewery. The other hops used here, the basic ones, are Saaz-Saaz and Styrian Golding.

The Duvel story though goes back well beyond 2007. It all began when Jan-Léonard Moortgat and his wife founded the Moortgat brewery farm in 1871. Around the turn of the century, Moortgat was one of the over 3,000 breweries operating in Belgium and is still going strong. The beer is still brewed with profound respect for the original recipe and the time it needs to mature. More details here .

*****
The round, by the way, it not like a boxing round. Not really looking for a winner here. If we have four winners, then so much the better, for me!

Also in this series:
An Irish and Belgian Beer Quartet play a pretty tune on a Friday evening.