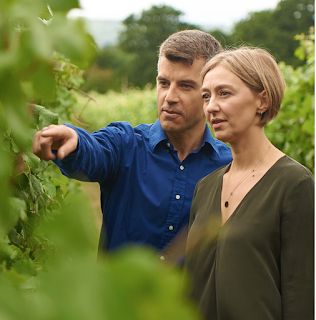 Married couple Cherie Spriggs and Brad Greatrix first joined Nyetimber, the leading English Sparkling Wine producer, as winemakers in 2007, after trying a bottle gifted to them by Cherie’s parents. They instantly recognised the promise of this early wine, and since 2007, Cherie (now the head winemaker) and Brad have been integral to building Nyetimber into a sparkling wine producer that rivals the best in the world.

Liberty Wines MD David Gleave introduced the Canadian couple at the start of the latest in a superb series of online masterclasses and said it was fascinating to watch the couple guide Nyetimber to a step-up in style and quality over the last ten years or so. “The fact that Nyetimber are No.1 for years is down to attention to the small details, and that was acknowledged in 2018 when Cherie was awarded Sparkling Winemaker of the Year at the International Wine Challenge – the first time that the accolade was awarded to a winemaker outside Champagne, an achievement which speaks for itself.”

Brad was keen to tell us about the details, enthusiastic that they were given free rein so “we can go deep” and they did. Nyetimber was founded in 1988 “when the holy trinity of sparkling wine grapes – Chardonnay, Pinot Noir and Pinot Meunier – found a new home in the lee of the South Downs.” And it did well and even better when new owner Eric Heerema arrived in 2006 and soon he recruited Canadians Cherie and Brad. 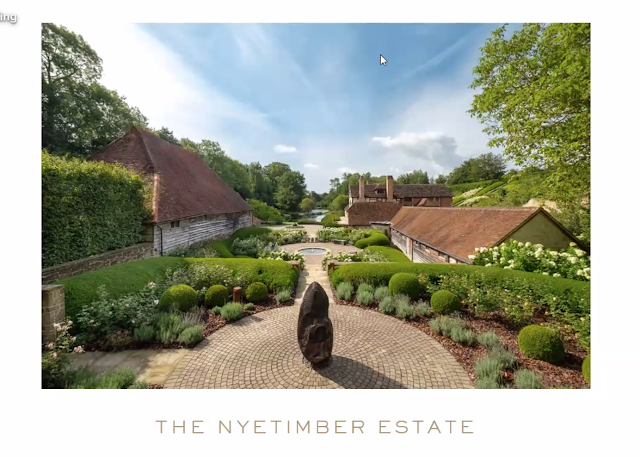 Now Nyetimber stretches over three English counties (Hampshire, West Sussex and Kent). In all there are 327 hectares and 11 vineyard sites, including one newly planted.

So why sparkling wine in this area of England? Take a look at the geological chart and you’ll see that the similarity between here and the Champagne area in France. 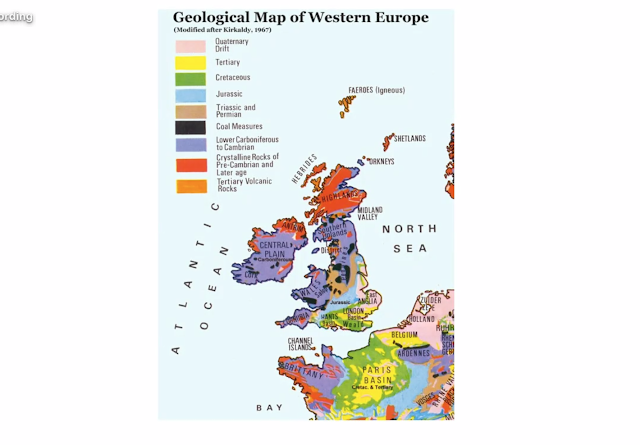 Cherie took us into the soil, the two types here: Greensand and Chalk. And one big advantage is that both are free-draining, essential to cope with the English rain. Take a look at the climate chart to see the numbers between April and September. Note too that the Nyetimber budburst, flowering, véraison and harvest all fall 3 to 4 weeks behind Champagne. One good thing about the delay is that “sugar, flavour, and phenolics all converge towards the end, a very good factor in England”. 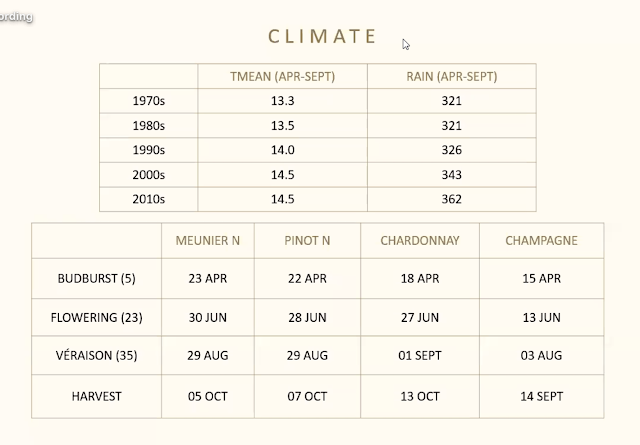 “If you’re serious about sparkling wine, you pick by hand,” Brad emphasised. As they pick, they use trays that are wide and shallow so that grapes at the bottom aren't damaged.

It is all about care and attention and of course that extends to the winery. They have a state of the art pressing facility, “very simple, ultra gentle”. Here the juice is divided into three “fractions”: “cuvée”, 1st press, 2nd press. The cuvée is more or less guaranteed a place in the final product, the 1st press (itself divided into two, 1A and 1B!) may or may not be chosen while the 2nd and final press goes to the compost. The selections are all done by taste! 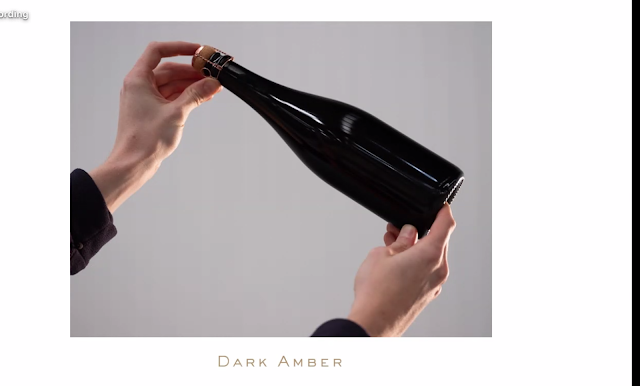 For bottling “you need a healthy yeast culture, but yeasts need a lot of air, a lot of aeration. But at Nyetimber, we said to ourselves, they don’t need all that aeration.” So they modified the line to get a little nitrogen in and, after quite a few trials, were rewarded when the wines showed extra freshness by comparison with those that hadn't got the nitrogen treatment. And not just freshness, more elegance and purity as well, “an amazing difference”. And so they “rolled it out in 2011.”

Sparkling Wine lovers are always keen for extra information. Nyetimber are not shy and make it easy to find out various dates such as bottling, riddling (a more important date than many think, according to Cherie) and disgorgement. If you have a bottle of Nyetimber you’ll see a code on it. Go to the website, enter your bottle’s code and you’ll get all the info you need!

Brad then held up what looked like a black bottle. It is in fact an amber one. But why amber? Brad joked: “It makes a nice back-drop for the packaging!”. “But, much more importantly, it protects the wine from particularly harmful wavelengths of light.”

And then Cherie talked to us about closures, beginning with traditional cork. Did you know the cork is divided into three layers? And that the thin bottom layer must be of the very highest quality. But the duo weren’t totally happy with their corks early on. “Traditional cork can bring extra flavours, nice ones like vanilla, but it is not consistent.”

DIAM is an artificial cork, one material from top to bottom, that looks much like the traditional one and Nyetimber decided to do multiple trials. The result was that DIAM proved the more consistent and is now used on their bottles since 2008.


Stainless steel is their vessel of choice for fermentation as it can keep the character of the vineyard “pretty pure”. By the way, their vineyards are subdivided into over 100 + plots, so they have 100+ tanks, all with individual controls. 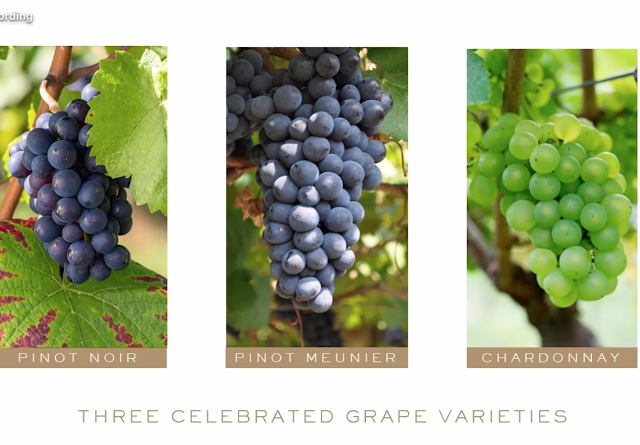 During the closing Q&A session, they were asked about the “absolutely astonishing 2009 Prestige Cuvée”.
Cherie said they had often thought about the possibility, from the early days. “Then came the quite extraordinary 2009 vintage, everything perfect. While blending, we felt we had the components across the three grape varieties. Afterwards we knew we needed significant time before release and it took us until Autumn 2018 to bring it to market. It was a big decision as the industry is relatively new in the UK and we have to make important decisions without the comfort blanket of history.”

Q: How is the 2020 vintage shaping up?
A: “It’s been an unusual year. Spring was generally good but then came very late frosts in some vineyards. May's been wonderful so if no frost damage, it will be great, if there is frost damage, normal. In years like this, we are grateful for the spread of vineyards and counties.” 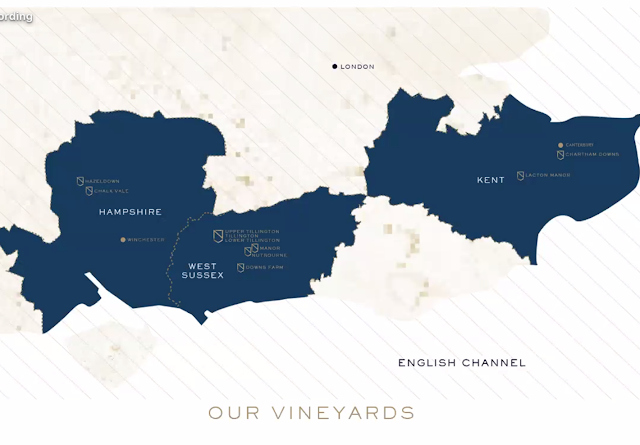 Previous masterclasses in this current series: