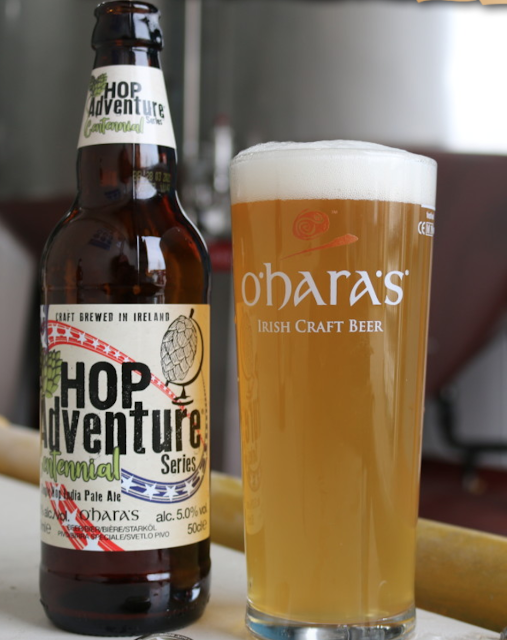 As you might expect from the label title, the hops is the king here. You are reminded that Centennial is also known as “Super Cascade”. But, nothing to fear; the reign is harmonious from start to finish, the bitterness and citrus aroma in exquisite balance, from the initial aromas to the very satisfactory finalé. A very enjoyable Taste of the Week.
A single hop winner from the Carlow based craft pioneers in their Hop Adventure series that also includes Sorachi, Aramis, Styrian Wolf, Idaho 7, Galaxy, and Eureka hops. No Cascade. Or have I missed one?
Slainte, the 2014 guide to Irish craft beer, classed Carlow Brewing, along with Porterhouse, Franciscan Well, Whitewater and Hilden, as being in the first generation of Irish craft brewers. Not an easy station then (1996) but Carlow successfully entered the export market to gain experience and sales and eventually a firm footing at home, their hard-won achievements underlined when they left their original premises behind and moved to Bagnalstown in 2009.
Carlow Brewing Company IPA O'Hara's Taste of the Week