A Quart of Ale± #43 On the craft journey. Illustrating German Lagers. 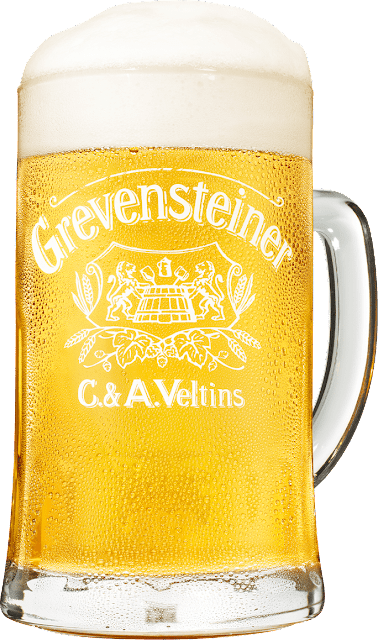 Pale gold is the colour of this Helles, a lager associated with the Munich area.  Head is very short-lived (they claim a “stable” head but not from this bottle) and the effervescence is barely noticeable - it is unfiltered. Aromas are mild and malty. This rather lightweight Helles is fruity and fresh on the palate, well-balanced and easy-drinking, a pleasing but hardly outstanding quaffer.

The Helles (which means pale) is a cool, refreshing, everyday beer that pairs well with salads, shrimp, or fish. Like the Dunkel, Munich Helles usually falls in the range of 4%- to 6% ABV, making it a nice session beer for a warm day.

They say: Brothers Carl and Anton Veltins brewed an enjoyable light Grevensteiner for special occasions - mild, light to drink and, as was customary at the time, naturally cloudy. With its fruity and fresh note and a fine malt aroma, Grevensteiner Hell is harmoniously rounded off in taste.

The history of the Veltins goes back close to 200 years and quite a few Germany brewers go back further than that. Some of these breweries are quite large now.

What of craft beer in the country? According to the latest World Atlas of Beer “the notion of craft beer has arrived and is fair buzzing in Berlin and Hamburg, but elsewhere such beers are thinner on the ground.” It seems the vast majority of German brewers, both big and small, continue to make reliable, local versions of familiar styles. If it ain’t broke, don’t fix it. 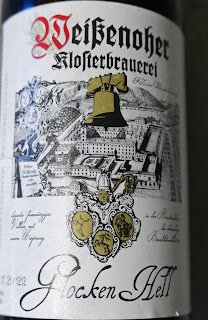 Poured this into a tall-ish glass (Metalman) at quite a rate and got myself a good head, three-fingers, as a result. Millions of bubbles rise rapidly through the clear amber liquid. Floral and slightly spicy notes from the aromas. Elegant and finely spicy on the palate, a touch of malty sweetness too and, of course, no shortage of refreshment.

Just the job at the end of the day! When the evening bell tolls, have a pint. Was reading the label, with the help of Google translate.

“Then as now, the sound of the Weissenoher church tower not only announces moments of prayer and contemplation. It also determines the mundane daily rhythm. … One of the nicest moments of the day is surely the end of the day. Ring in your evening with our Glocken Hell.”

From a Benedictine cloister to a cloister brewery – that was just a small step to take for the friars of Weißenohe. The Kloster Brewery was founded around 1050. According to the Beer Handbook, it has three beers that you should look out for. One is the signature Altfränkisch Klosterbier, the second is Eucharius Märzan and the third is Bonator Dopplebock (pretty sure I have that in my queue). 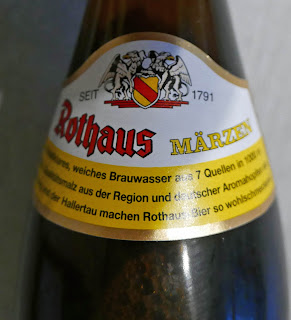 Give this German a robust pour and you’ll get a decent white head that hangs around for a spell. The important bit comes after that, the light gold body and the zillions of micro-bubbles in the ever-rising fountains. Herbs crowd the aromas, nothing too intense. The smooth body is more malt (rich and bready) than hops with a fruit input in between and a mild tartness. Quite a balanced beer actually, easy drinking, an enjoyable companion at either lunch or dinner.

So where did Marzen come from? Beers of this type of brewing are traditionally more heavily brewed, as brewing was only allowed in the months from September to April. A beer with a longer shelf life was thus produced in March, which also survived the five months without a brewing process and was produced just in time for Octoberfest.

According to the Beer Connoisseur, the Märzen style is a malty, amber, European-style lager that can trace the roots of its modern variants all the way back to 1841, when Spaten created the first recipe for the style. Märzen become the official beer of Munich’s Oktoberfest in 1872, a tradition that lasted over 100 years when it was replaced by the lighter-bodied, golden-colored Festbier in the 1990 Oktoberfest. Yet many Oktoberfest beers are still technically Märzens.

It is a full-bodied, luscious beer with the unique barley malt from southern Germany bolstering its character. Fresh brewing water as well as the famous hops from Tettnang and the Hallertau make the taste experience more or less perfect. So well done to the Rothaus master brewers who have produced a top class beer that has been a favourite for decades.

This original smoked beer, now regarded as a classic, has been Bamberg's specialty for centuries. A dark bottom fermented lager beer, brewed with 100% smoked malt from the Schlenkerla maltings.

Black is the colour with a soft cream/coffee coloured head that stays around for a spell. Must admit I’d been expecting to find the smoke in the aromas but is is much more striking in the flavours, a kind of unrelenting smoky bacon. A dark bottom-fermented lager beer, brewed with 100% smoked malt from the Schlenkerla maltings. The brewery is also a maltster.

The Story: Schlenkerla smoked malt is kilned directly over an open wood fire. The smoke from this fire penetrates the malt and gives it its unique smoky flavour. Until the invention of modern malting systems in the 17th and 18th century with heat exchangers running on coal, oil or gas, smoke kilns were THE standard. As the new industrial form of malting was much more cost efficient, the smoke kilns everywhere were closed down. Not so at Schlenkerla!

Indeed,  Slow Food® has made Schlenkerla Rauchbier a passenger in its “Ark of Taste”.

Kegworks say Rauchbier will generally have a light copper to dark brown colour with an ABV of around 5-6%. The aroma and taste will have a combination of smokey and malty flavours to it.

Bamberg is, surprisingly, one of the top brewing cities in Germany, synonymous with Rauchbier. Beer FAQ says our Rauchbier is the one with which most been enthusiasts worldwide are familiar. “The brewery..traces production back to 1405…still taps the traditional brew from wooden barrels”. Sounds like a place to visit for sure. Don’t like smoky? Don’t worry they have a brewery here for every 8,000 people and you may sample multiple beer styles.

“Pils” may be Germany’s most well-known lager. Aromatic, crisp and moderately bitter it is refreshing and a terrific session beer.

Maibock is the spring beer (Mai = May). Hops and malts get a turn here. Quite versatile at the table with pasta dishes, salmon, or shellfish recommended.

Märzen has traditionally been brewed in March to be enjoyed at festivals starting in September. Again, there’s usually a good balance between malts and hops and you can enjoy it at Oktobertfest with the schnitzel, brockwurst and game.

Helles can be easily found in Munich, its crisp finish similar to Pils. Cool and refreshing, this everyday beer goes well with salads, shrimp, or fish, an excellent session beer.

There are quite a few other types including Rauchbier (see the Schlenkerla above). And our own Whiplash have a terrific Black lager, appearing soon in The Quart. You'll also come across Kolsch which is a hybrid, meaning that its producers employ elements and techniques of both lager and ale.

How To Pour A German Lager From A Bottle*

2. Place the tip of the bottle in the glass, and pour the beer quickly down the side.

3. Start to straighten the glass as the beer reaches the top to create a nice head of foam.