A Quart of Ale± #77. On the craft journey. A session with Wide Street, Larkin's and Curious Society

On the craft journey. A session with Wide Street, Larkin's and Curious Society

This one’s got a lemon/orange colour and is very hazy indeed, more or less opaque with a white head sinking slowly. The aroma is not the most intense but it is pleasant with notes of exotic mango and passionfruit. And it is more of the same on the smooth and supple palate, hops and malt in good balance. An excellent beer with a formidable finish. Would love to do a head to head with a draught version of this and Crew’s Polly.

It appeared in May and Larkin’s were delighted:  “It's been a while! It's fair to say the lockdowns haven't been ideal for us here at Larkin's. But we've adapted in a few ways to overcome these challenges and we're coming out the other side stronger and better for it. We, along with all the other independent breweries, have had great support from everyone and this has made more difference than we've been able to express so THANK YOU! Thank you for buying craft and thank you for spreading the word to others who are now curious to try new styles and breweries.”

“..as a taster of things to come, here's Drench!  A 7% absolute banger of an IPA with an uncalled for 20g/litre dry hop of Strata, El Dorado and Idaho 7. This is new England through and through with big malt body to carry the hops and enough bitterness to balance it out.”

Bierhaus Cork soon had it on tap: “It’s literally been tapped up in at @bierhaus_cork for the weekend! Incredible beer- this is the best brew I’ve had on tap in a year.” Encouragement there for a “dank and juicy” beer.

Another in the Curious Society series by Larkin’s of Wicklow, their impressive collection of budget beer offerings.

Colour of this American Wheat Beer is a lemon/orange, a hazy one with a soft white head that contracts reasonably quickly on pouring (from the can) but it does leave a reasonable crown. Aromas have a hint of orange peel which is indeed an adjunct here.

Straight off, I found this smooth customer very refreshing on the palate and on the finish. Bitterness is on the low side and there’s no sign of the clove or banana that you  find in European wheat beers. The producers suggest enjoying it on its own or with a slice of orange. It is very drinkable, for sure.

By the way, they suggest that if you enjoy the artwork to check out the "immortal game”, one of the most famous chess games of all time. I’m sure if you’re curious, you will! 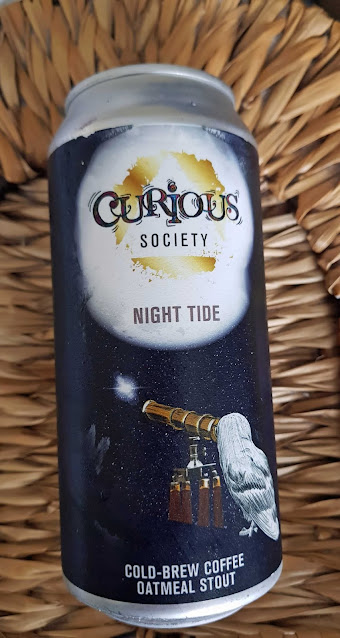 “For this .. beer we teamed up with #cloudpickercoffee to bring you a full bodied velvety coffee oatmeal stout.” That’s how Curious Society introduce their Night Tide.

It pours black as night in a Wicklow wood with, yes, a coffee coloured soft head. It smells of coffee, from the dark roasted malts - coffee is an ingredient. It is close to full-bodied and rich. “Subtle flavours”, they say,  “but none of the bitterness that you can get from coffee.” Perhaps so, but there is a lively edge to it, not necessarily a bad thing, in fact it gives it a refreshing quality.

A doubt arose in my mind when I looked closely at this can. Of six cans bought (including this one) on the day, three were within days of the best before limit. Of the three, one was very poor, the other two lack-lustre. The expiry date on this is a few months off at Jan 22 but, once the doubt has set in, you’re left uncertain and wondering would it have been better a few months back. Purchase and Drinking date: 19th October. Note to myself: “Get into the habit of checking the dates!”

“When West Coast bitterness meets the citrus-y fruity flavour and aroma of an East Coast IPA. Whirlpooled and dry-hopped with Cashmere and Citra hops.” That’s the introduction to this IPA by producers Wide Street.

Colour is a mid-orange, hazy, with bubbles galore streaming towards to the soft white head. Aromas and flavours are both packed with citrus (lime, grapefruit, orange), mango and more. No shortage of bitterness either though, as promised. And the finish is good and dry.

They say: Unfiltered, unpasteurised, and can conditioned containing yeast sediment. Whirlpool and dry hop additions of 15g/l Cashmere and Citra hops provided the bitterness of a West Coast IPA and the citrus fruit aroma and flavour of an East Coast IPA. An all encompassing IPA. Refrigerate, store upright and pour carefully.