A Quart of Ale± #76. On the craft journey with a session of Mescan, Land & Labour, Eight Degrees and Dead Centre

On the craft journey with a session of Mescan, Land & Labour, Eight Degrees and Dead Centre

Old Brown, or Oud Bruin in Flemish, is a dark beer from Mayo’s Mescan with a mild sourness that has been brewed in West Flanders since the 17th century. Mescan fans, and more, will know that Bart, one of the two principals in Mescan, is a Belgian.

The colour is indeed a dark brown with an off white head that doesn’t hang around too long. Aromas are a little on the funky side, a slight sourness in the mix. Close to black in colour, yet the beer has a light enough body, a kind of ethereal mix where sweet and sour notes happily coexist. In other words, this Old Brown is quite something else, pretty unique so get out there and gather up as many of the limited bottling of just 1400 litres, a very limited release indeed. 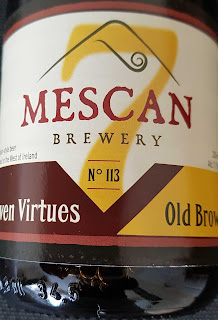 They say: We are really excited about this beer - Old Brown, or Oud Bruin in Flemish, is a dark beer with a mild sourness that has been brewed in West Flanders since the 17th century. Our Old Brown has spent over 2 years in oak where it underwent a secondary fermentation with Brettanomyces yeast in the wood.

The water for Mescan beers comes from deep underneath Croagh Patrick via a spring beside the brewery. Malts, hops and yeast for the beer come from Belgium. All Mescan beers are vegan-friendly. 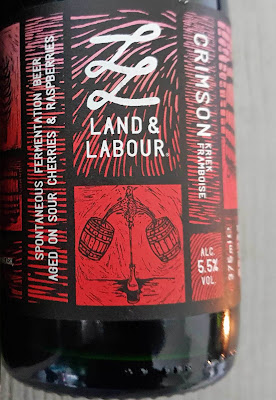 Let Land & Labour tell you about this one: We aged 1 year old spontaneously fermented beer on 830 grams per litre of sour cherries for 6 months. Before bottling we blended another Spon beer aged on 300 grams per litre of raspberries with the cherry beer. The final assemblage of 75% Cherry beer & 25% raspberry beer transcends both their individual selves.

With all that fruit involved, you’d expect it to be fruity; and it is. It is also sour, not perhaps as sour as a real sour, but it can take your breath away if you are not expecting it. In other words, it takes a bit of getting used to. But it is well worth the effort.

Certainly a different animal to the Chouffe Cherry whose bitterness is on the lower end of the scale. Still it is not too difficult to get over that initial puckering from our Land & Labour and to go on and enjoy it.

Land & Labour were struck by the “fruit saturation” early on “..we decided not to mess with the fruit saturation by further blending more aged beer before bottling (standard practice ). By not blending back we’ve maintained its incredibly high fruiting level & have managed to preserve all the fun & intensity of these beautiful fruits in each bottle. Even after 6 months bottle conditioning it’s as vibrant now as the day it went in!”

Colour is a cloudy ruby red and you’ll spot little bubbles clinging to the glass. There’s a lovely head of pink froth but it is short-lived. The fruity flavours are prominent on the palate and the finish is dry, sour and superbly refreshing.

Interesting label note: this is an unfiltered unpasteurised beer. It’s alive. So is the yeast. Keep it, grow it, brew your own!

Certainly looks like lager with its light gold colour and soft white head. “It’s a beer packed with hoppy possibilities,” say Eight Degrees and the aroma is an early illustration of that point.

The blend of new and old world hops makes this a generous lager, it is after all harvest time! Quite a concentration of flavour, almost akin to what you’d expect from a dubbel. Very generous indeed but the refreshment factor, an essential factor in lager, is not neglected and it finishes clean and deep.

Always look forward to the Eight Degrees food pairings and here they are: This Oktoberfest-style bier will go superbly with traditional Oktoberfest-style food: bring on great big würstl with plenty of mustard and sauerkraut, warm pretzels and that spiced cheese-butter spread called obatzda, a spit-roasted half chicken and roasted ham knuckles. A plate of spaetzle or semmelknödel and that’s you filled up until Christmas. At least you have this hoppy lager to cut through all that dense, rich food. If you have a chance – or can take any more food – try this beer with Dampfnudel, those sweet steamed dumplings, and see how the fresh citrus notes brighten up what could otherwise be a heavy dish.

Quite a lot to be going on with. Personally, I’m inclined to try it with Skeaghanore Confit Duck leg and any kind of cabbage from boiled (Sweetheart, Greyhound or Savoy) to sauerkraut to roast.

This is the third in the brewery’s ORIGINAL GRAVITY and the can art work this time is by Niamh McCarthy of Yellow Lion Studio. This illustration represents the freedom that lies ahead of us, with opportunities and possibilities on the horizon. It’s all about the adventures we can have again, embracing Ireland, the beautiful scenery and nature we have on our doorsteps.

* You may well be asking what is Original Gravity? A gravity reading taken just prior to yeast being added, or pitched, is referred to as the original gravity (OG). The OG will provide the brewer with a good idea of the potential alcohol percentage for that particular beer more here.

Brewed by Athlone’s Dead Centre on Pale Malt and Chateau Wheat Blanc, this Extra Pale Ale is hopped with Talus and Citra for lots of bright hop character.

An inviting gold colour with a bright white head is what you see. And it is hazy. Citrus and floral are what you smell in the aromas. It is bright and immediately refreshing on the palate with the malts showing up well to balance; excellent mouthfeel and good depth of flavour. One for your session list!

They say: Dead Centre is not a faceless corporation…milking the beer industry for all it’s worth. Instead, we’re a tight knit crew that relies on friends, family, colleagues and other breweries to create a product that we can truly be proud of.

Fresh, flavoursome and (wherever possibly) local ingredients are what give our beer it’s character. Cutting corners here is not an option at Dead Centre Brewing. We believe you get out what you put in…so only the best goes in.

And there’s pretty good stuff coming out. This Athlone outfit are worth keeping an eye on.