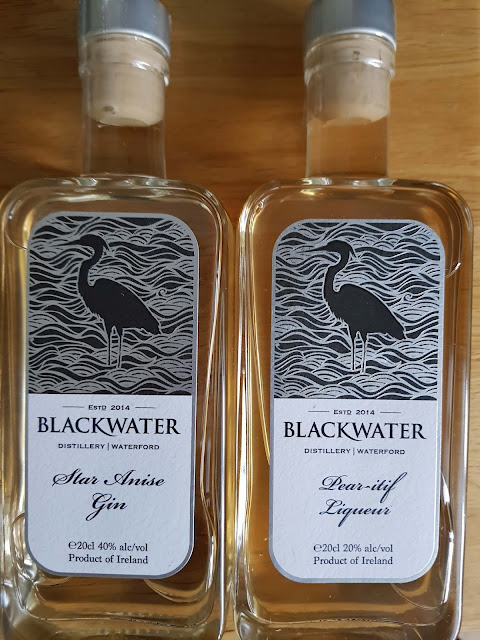 The Blackwater Distillery Tasters Club for 2021/2 is up and running, the latest double featuring a Star Anise Gin and an intriguing Pear-itif Liqueur.

When you sign up you get two unique spirits delivered by courier every two months. “Perfect for a great night in,” says Blackwater founder Peter Mulryan. And the night gets even better if you tune in to their night of fun (every 2 months to coincide with your delivery) on Facebook where you’ll get all the tips and ideas and demos you need to make the best of your two spirits.

And those spirits are not repeated during your 12 months membership. We got some terrific doubles in 2020/1. Some of the gins featured included Windfall Spiced, Jaffa Cake (very popular), Christmas Pudding and Blood Orange.

I was very taken with the other spirits, including the Raspberry and Rosehip Vodka, the Cranberry Vodka Liqueur, and Love Potion #5 (created by @miss_susanboyle). The first class blackcurrants from Des Jeffares featured in two of the drinks, two really excellent bottles, the Wexford Cassis and the Wexford Blackcurrant Gin. All the bottles are 20cl.

So this October’s other spirit is the Pear-itif Liqueur. On the launch night, Peter introduced recent recruit Sylvia from Italy who is responsible for this beauty.  She was back in Italy on holidays and still thinking about the job! “I was looking to use an autumnal fruit and then I saw a pear based Grappa and that was the initial inspiration.” Team-work and hard work followed in the distillery before Sylvia and Blackwater came up with Pear-itif which is 20% abv.

When your packet comes, you also get information cards, one giving a “Perfect Serve”, the other giving details of a cocktail, in this case entitled Perfect Apear-itif, and you’ll see a demo, by John Coleman, as well. The pear drink has a nose of stewed fruit, pear drops on the spicy and fresh palate and a long and luxurious finish.

The Star Anise Gin, at the usual abv of 40%, comes with a little pack of Star Anise, of course, to garnish your cocktail which is called Anise-tini, again demonstrated on the Facebook event. The perfect serve for this gin is is to try it with a splash of organic apple juice topped with soda over ice. And you are advised that this is a mixing gin, strong, forward and spicy - drink it long with tons of ice and tonic, garnished with pink grapefruit. By the way you can check all this out on Facebook here.

Peter says the club is “the perfect treat for the bold and adventurous among us who love gin and trying out other exciting spirits from our micro-distillery in rural Ireland”. The December box is next and it is a Christmas themed box that will be ready very soon.