A Quart of Ale± #69. On the craft journey with a session of Hope (on the double), Galway Bay and Ballykilcavan

On the craft journey with a session of Hope (on the double), Galway Bay and Ballykilcavan

This full-flavoured, citrusy and double dry hopped IPA has an orange colour with a touch of amber, hazy enough too, though you can see fountains of bubbles rising towards the quickly diminishing white head. Orange notes too in the aromas and onto the palate where you’ll find it a well-balanced and smooth juicy experience. The hop character is matched by the malty body and, even with the high-ish abv, the character of the beer shines through.

They say: Handsome Jack IPA is a balanced, smooth, intense and citrusy dry hopped IPA in the American west coast style.  It is well balanced between the high level of bitterness, thanks to unusual combination of American and Japanese hops, and the sweetness provided by Irish Pale malt.

A Tall Yarn: Jack Criss, the 17th century Irish pirate, was tall and handsome with blonde hair and eyes green as the sea. He set sail from Ireland, plundering his way to Spain and Italy. He didn’t die in battle but was stabbed to death in a Naples hotel. Probably by one of his four wives. Some bachelor!

The beer, by the way, has much more credibility than the yarn!

This modern hybrid style lager has a gold colour, lots of bubbles on show, with a delicate slow fading white head. Hops make their presence known in the nose. Very impressive introduction on the palate, with a terrific mouthfeel, richer than the normal craft lager, malt sweetness and hop bitterness get along very well indeed. It is deeply refreshing, full of flavour and persistent.

The first tasting for me was at the back end of 2020 and I found it a big and pleasant surprise for me and one to note for sure. Not so much of a surprise this time and still one for the short list.

They say: The malts and the yeast we use are traditional, but the hops are not. We use lager malt and other European malt such as Munich malt for flavour, and we use a classic German lager yeast: a strain originally isolated from the oldest brewery in the world. We also use modern American hops for flavour, such as Citra, El Dorado, and Mosaic, furthermore we use the dry hopping technique which is associated with IPAs rather than lager. Underdog hoppy lager is the result.

When it comes to food pairing it’s a brilliant all-rounder, great with BBQs, pizza, spicy foods like curries and for anybody who doesn’t like wine with their food. 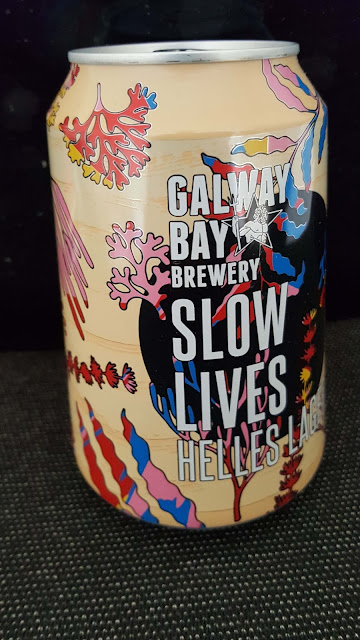 Slow Lives comes in a hazy gold robe and an attractive head that is not for hanging around. Aromas are fresh and a bit yeasty, bread-y. First contact on the palate is malt influenced; it  promises refreshment and that is delivered. Clean and crisp, excellent body and some hop bitterness on the finish. Quite a mix of German tradition and Irish skill from the crew at Galway Bay. Very satisfying indeed, with second can appeal, and a lip-smacking finish.

Helles, meaning light and bright, is a bottom-fermented beer of Southern Germany. Pilsner (pils) typically has a distinct spicy hop taste. The Saaz hops used here is named after a Czech village and, like the Germans, the Czech make some excellent Pilsners.

It has a slightly hazy orange colour with a soft white head that flops slowly, no shortage of bubbles underneath. Citrus notes prominent in the aromas. There is a punch from the hops on the palate and the finish itself is refreshing.

The Millhouse, a Session IPA, is Double Dry Hopped with Citra, Amarillo and Mosaic. Organic Oats from Merry Mill, a nearby farm, is also used.