You can call me Al. Our bird on the outstanding Hawk Walk at Aillwee Cave

You can call me Al. Our bird on the outstanding Hawk Walk at Aillwee Cave

We are hanging out with Al, a Harris Hawk and our bird on the walk through the woods by Aillwee Cave in the Burren. We include CL (Al is her bird for the walk) and our guide James of Aillwee. Al has been speeding up and down paths (sometimes millimetres from the ground), more often skimming through the often dense hazelwood, for his rewards of little nibbles.

But now, after an hour or so, we are on the way back and he is now on my arm. Suddenly he tenses, he knows dinner is coming from James. His grip increases - you feel the enormous power in his solid bone claws (the rest of his bones are hollow). He is excited as any other hungry animal, just think of your puppy when he hears the rattles of nuts, and he shifts often. Finally, the red food is at hand and he tears (literally) into it.

Quite a feed vanished in no time and soon he is picked up any stray bits and licked between his toes. James says he that after a feed like that he’ll be in a lazy mood in the morning and won’t be assigned to any early duties. 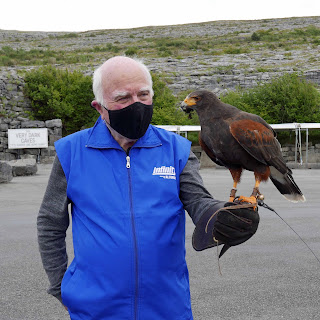 Our afternoon had a more gentle start, in the arena where the Birds of Prey staff put a few different birds through their paces. First up is a Red Kite, a medium large bird found mainly in Western Europe and North West Africa. Kites have a fantastic ability to glide and turn and that was well illustrated here by our bird called Éiru.

Next came a falcon, “one of the fastest animals on earth.... And his eyesight is on another level, he can spot a pigeon at four miles.” As he was put through his paces, by James, swallows crowded around him in the air, safe in the knowledge that they are one of the few birds that the falcon cannot catch!

And the arena show closed with a trio of Harris Hawks (not including our Al!). Theses hawks, found in Arizona and down through South America to Argentina, are unusually social and will look after their weaker group members. They are the only social raptor and even hunt in groups, anything from three to twelve birds. Twelve would certainly make a formidable opposition in the wild.

With the arena show over, we were taken to meet Al, who had a good look at us. It seemed that he approved. Just joking. These birds have little interest in humans other than as providers of food. Soon we were in the woods and Al was showing off.

He would fly away, until out of sight. Then James would whistle and Al would come at a fantastic speed, up the path maybe, just a few inches above the ground. Sometimes, he didn't oblige with such a photo friendly run but would pick his way through the trees. In either case, he would come to a stop, seemingly at the last minute and land on your hand, facing back the way from which he had come. As time went on, he responded to my whistle (doesn’t really matter who he gets his food from!).

James filled us in on these hawks. Al by the way is an 8-year old and has been doing these walks since year one. They are weighed every day and that determines the amount of food each bird will get. In the wild, they can live to between ten and twenty years, double that in captivity.

Their diet in the wild consists of reptiles, birds, rodents and rabbits. Here they get lots of chicken and quail and anything else they see themselves. While we were in the wood, Al spotted a pigeon, the fastest pigeon I’ve ever seen and he just managed to get into the thicker part of the wood before the hawk arrived. Trained Harris Hawks have been used to remove unwanted pigeon population from buildings in the US and the UK.

James kept emphasising the magnificent eyesight of these hawks. It seems to be an amazing system, with nine tenths of it going back into the head, a kind of sophisticated control room. This Swedish study revealed that Harris Hawks have the best colour vision “found in the animal kingdom to date.”

So big thanks to Aillwee and James for the amazing opportunity to see Al at close quarters. If you book the Hawk Walk, your companion can also come to record the event for a much reduced fee. And again, there is a combined ticket for Hawk Walk, the Arena Demos and the Cave itself. All the details at Aillwee Cave. And don't forget a visit to the Farm Shop for some fantastic tastes of County Clare and Ireland.

* I didn’t realise it but I did come across the Harris Hawks before - they are very popular for falconry displays. I met mine at the Dordogne’s Chateau des Milandes (the former residence of song and dance star Josephine Baker, in the news recently for having been awarded the French Légion d’honneur). Birds put through their paces that day also included a Kestrel Falcon, a Barn Owl, an eagle owl, various other falcons and an American fish eagle. You don’t have to go to France to see them at close quarters as many are right here in County Clare!
** Check out our visit to the food treasure trove that is to be found at the Farm Shop in Aillwee; details here.
Aillwee Birds of Prey Burren