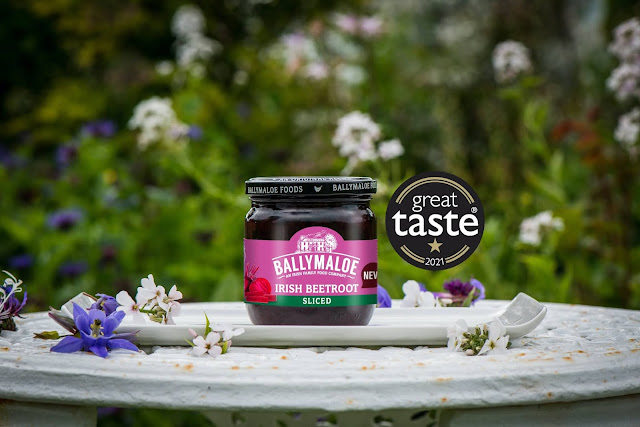 Ballymaloe Foods has received a one-star award at this year’s prestigious Great Taste international awards for its Ballymaloe Sliced Pickled Irish Beetroot. The Great Taste awards, run by the Guild of Fine Food in the UK, are known as the world’s most trusted food and drink awards.

The entire range of Ballymaloe Sliced and Diced Irish Beetroot will now be able to display the unmistakable black and gold logo, a stamp of excellence that is recognised by retailers and consumers alike.

All the beetroot used by Ballymaloe Foods is planted, pickled and packed locally in East Cork making it the only 100% Irish locally produced beetroot available nationwide. Two farmers, Joe Hartnett and Darren Allen, have set aside 24 acres to grow the purple vegetable every year.

General Manager at Ballymaloe Foods, Maxine Hyde said the company is delighted with the Great Taste Award, “We are over the moon to get such great news about Ballymaloe Sliced Pickled Irish Beetroot. Our beetroot is a lovely example of a farm to fork journey, showing traceability, sustainability, and the benefits of using local produce to create something special.  We are very proud that this product has been awarded 1-star in the Great Taste Awards in 2021 and we share this honour with our two local farmers Joe and Darren as without their hard work this product would not be on shelves and in kitchens around Ireland.”

The award judges described Ballymaloe Sliced Pickled Irish Beetroot as: “Darkly jewelled red with a translucency in the pieces of beetroot that vary in size and shape. Tender to cut but with good integrity so that there is a bite to them. Great flavour with sweetness then sharpness from the vinegar that then meld together with the typical beetroot earthiness. Versatile and probably delicious in a goat's cheese tart.  We enjoyed these pickles.”

In total, 5,383 products were given awards from more than 100 countries.

The Guild of Fine Food’s Great Taste awards was founded in 1994 and are seen as a stamp of excellence for food products. There are 355 judges and they include food critics, chefs, restaurateurs, retail buyers, cooks, producers, food writers and journalists. All products are removed from their packaging before being tasted.