A Quart of Ale± #68. On the craft journey with a session of Wicklow Wolf, Galway Bay, Whiplash and Kinnegar. 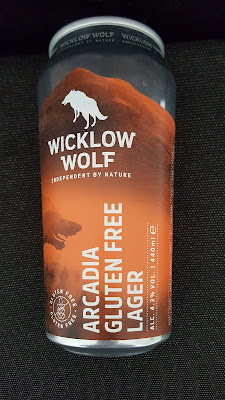 On the craft journey with an impressive session of Wicklow Wolf, Galway Bay, Whiplash and Kinnegar.

Lovely gold/amber colour on this lager, with a soft white head. Great display of bubbles rising. Aromas are more malt than hop. Straightaway, you notice the refreshing edge, “great cutting in it” as was said some decades back! But it has. Smooth also with a subtle balance of fruit and hop, a little sweetness and a hint of spice. And that crisp finish.

“Slowly conditioned to ensure an exceptional taste,” they say. I’m happy to say I’m quite impressed with this lager which is gluten free. 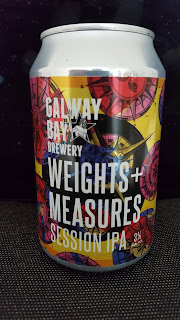 Lemon coloured, hazy, with a soft fluffy head. Resin and citrus really prominent in the aromas. Bitter on the palate, yet juicy enough with floral hints floating around. Quite a concentration for a mere 3.0% abv. Actually quite a beer for that abv. Probably not for craft novices but a really excellent session IPA.

Galway Bay Brewery started life when friends Jason and Niall got fed up of the beer scene in Ireland and decided to do something about it... In 2009 they opened one of Ireland's only brew pubs, The Oslo Bar in Salthill, Galway. From a pretty simple brew kit they produced two beers that went straight from conditioning tank to tap... Over ten years and three moves later Galway Bay Brewery's new home in Oranmore, just outside Galway, gives us the space, light and freedom to expand and experiment. Their old space at the Oslo was taken over by a micro-distillery Micil when last I visited.

This witbier owes much to its WLP410 yeast. Quite often yeast doesn’t get the credit it deserves, not from drinkers anyhow. Brewers know, or should know, better. Craft Beer for the Geeks sums it up: Brewers and beer drinkers owe everything to these single-celled fungi that we can’t see.

This Il Veliero has an orange colour, hazy. A short-lived head. Aromas are zesty and herby rather than fruity or floral. It promises much and that zestiness turns to orange on the palate. Il Veliero is quite interesting, engaging, at this point. And keeps the taste buds on full alert as this zest reinforced beer freewheels towards the finish line taking the yellow jersey as we head to stage two (second can). 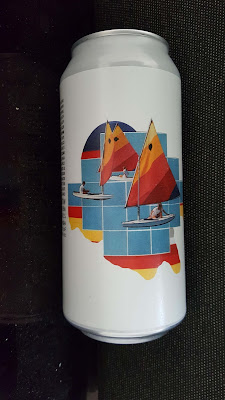 To Øl, the Danish brewery is much admired internationally, and they obviously admire Whiplash as the Dublin brewers produced this easy drinking beer, not your regular wheat beer, especially for the To Øl Beer Club.

Whiplash say: Brewed for our friends at the To Øl Beer Club. A base of Pilsner and Wheat for colour and texture lets a Witbier’s other parts shine. It's bittered with Magnum hops before a sprinkling of Coriander seed toward the end of boil. Il Veliero gets a dose of fresh Orange Zest in the whirlpool and is fermented on WLP410 for a round mouthfeel and light phenolics. The beer is then repeatedly assaulted with fresh Grapefruit & Orange Zest at the end of fermentation building to over 15g/L of Double Dry Zest action.

Yeast: WLP410. This a Belgian Wit II Ale Yeast and is ideal for witbiers or Belgian table beers.

Colour is a foggy mid-gold, white head fades away, slowly enough, leaving the merest lacing on the glass. This easy drinking Rye IPA (one of their core beers) is unfiltered and naturally carbonated. You notice the rye influence in the aromas (touch of spice too) and also as you sip this fresh fruity (citrus) session beer from the Donegal brewery who have more than one rye on their portfolio. Fruit and bitterness are well balanced here and the malt too keeps its end up making it one of my favourites from the list.

Certainly a contender in the session category, easy-drinking but lively and full flavour with a nice bit of grip to the finale. Dún na nGall Abú, I reckon.