Sometimes when I visit an attraction or exhibition, I find myself overwhelmed with information on boards and screens and I have developed a kind of easier way out by concentrating on the food element. And there is almost always a food element.

As there was on the 1st of September when I found myself in Dunguaire Castle (more of a tower house than a fortress) on the shores of Galway Bay, very close to Kinvarra. As it happened, there wasn’t that much info here (don’t get me wrong, there was enough) but the food element did catch my eye as we moved up through the four floors. 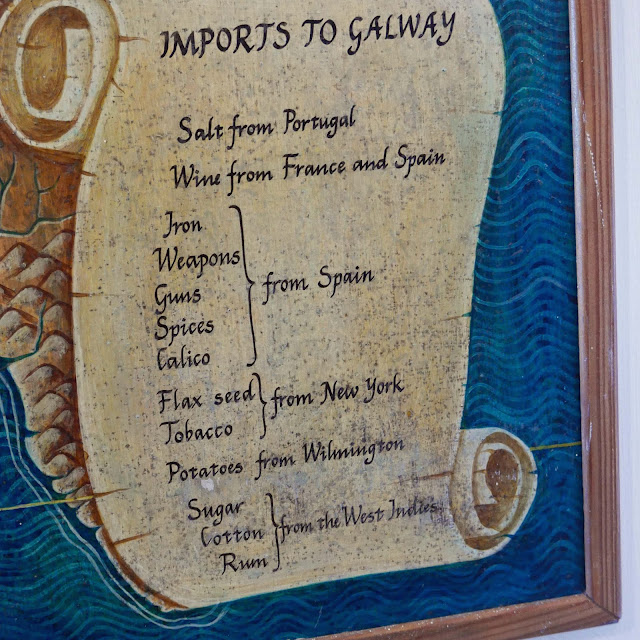 It was also possible to get out on the roof and take in the views, possible if you were Johnny Sexton, perhaps not if you were one of the prop forwards on the Irish team, as the walkway between the parapet and the coned roof is very very narrow.

The castle takes its name from Guaire, a 7th century king of Connacht, noted for his generosity. He features in the legend of the Road of the Dishes, dishes filled with the good stuff from his table and transported to that of the hermit St Colman MacDuagh.

Tables are still often laden here at Dunguaire. It now belongs to Shannon Free Airport (since 1972) and they have developed it as a small scale banqueting hall. Here you may enjoy fine wines, “stories and excerpts selected to lift the soul and lighten the heart”. No banquets at present though due to covid but that could change soon!

Later that evening, we ate dinner, some with a retro feel to it (anyone for Deep Fried Brie?),  in the well-located and popular Pier Head Restaurant and Bar at the heart of Kinvarra. A similar Brie dish was on offer in Hylands Hotel in Ballyvaughan on the previous evening.

Perhaps one of our better places to eat in this corner of Clare/Galway is Monks in Ballyvaughan. Go for their shellfish, especially those Kelly oysters, and you won’t go far wrong. Watch out too for seasonal trucks and cafés such as Julia’s Lobster Truck and Linnane’s Lobster Bar; I haven’t been at either (I keep missing them) but the recommendations are trustworthy.

Places to stay? Our favourite is definitely Hazelwood Lodge where you get terrific hospitality, great comfort and a marvellous breakfast. Hazelwood is very well located for nearby Aillwee Caves, Caherconnell Fort and its Sheepdog Demos, and the ancient Poulnabrone Dolmen.

The 10-year old Kinvarra Guesthouse is right in the centre of that village and is bright, modern and spacious with a decent breakfast too (do watch out for the currant soda bread!).

Of course, we visited Aillwee and did the fabulous Hawk Walk, details here. Another interesting call was to Caherconnell Fort. We started with the sheepdogs and marvelled at how they responded to the calls and whistles from their very informative handler to get the sheep to where he needed them and also to keep them there. Some of the dogs are also trained to handle the cattle in the hard rocky Burren fields.

I knew very little about the fort here but, amazingly, it dates back to 3,000BC. Our guide talked as she walked and when she stood still. She told us about the first artefacts (from 3,000BC), the first graves (from 500AD), the fire pit (650AD), the construction of the fort (900AD) and the last habitation (1700AD) right up to today (where a small exterior enclosure is used to shelter and protect weak lambs).

Many kinds of jewellery and domestic tools have been found here and all are now in the charge of the national museum in Dublin. A human body was found just outside the fort and that too went to the capital. The remains of an adult female and an infant dating to 600AD were discovered under the fort walls. It seems that it was a mark of honour to them that they were left undisturbed at the time. And they have been left more or less undisturbed too by the today’s archaeologists as such an intrusion would disturb the now historic walls.

It is quite an amazing place and perhaps too little known. If you are in the area it is well worth a visit, well worth the modest fee. By the way, they have a lovely tea rooms here as well overlooking the calves in the adjacent field and vast sweeps of the grey Burren.

Just a few minutes away, you’ll come across the Poulnabrone Dolmen (no entry fee). This is a Portal Tomb built from great slabs of limestone, over 5,000 years ago (around the same time as the pyramids were being built). The remains of over 30 people have been found on this ancient site. It is indeed much smaller than the pyramids but still you look at it in awe.

From it amazing Cliffs of Moher to the Burren to its caves, there is much in County Clare to look at with respect and awe. Time to go and visit!

* Sometime during the 12th century, the mute swan was introduced to the Irish dinner table. (ref: Dunguaire panel).

** Other places worth a visit in the Ballyvaughan to Kinvarra area are Hazel Mountain Chocolate (bean to bar makers) and the Burren Perfumery.