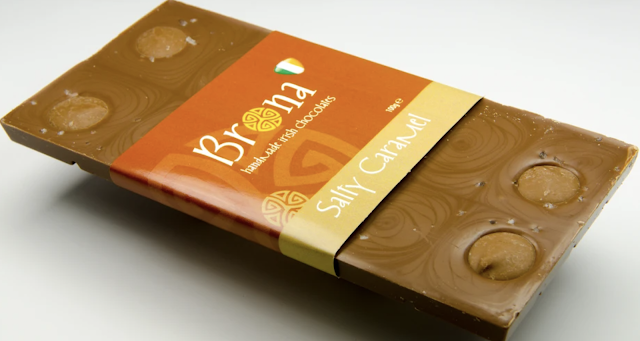 A recent visit to the Farm Shop at Aillwee Cave in County Clare revealed to me a treasure trove of Irish produce and among them this delicious chocolate bar by Brona.

It is a very creamy chocolate (89%) with a nicely judged amount of sea salt. It is a combined inter-county effort, the salt is Beara Sea Salt, it is produced in Listowel and sold in Ballyvaughan (and in many outlets from Baltimore to Bundoran to Brittas Bay).

Brona say: Brona Chocolate is produced on the banks of the river Feale in North Kerry which is in the beautiful south-west corner of Ireland. We are a family-run artisan chocolate producer dedicated to producing the highest quality chocolate products from the best available ingredients. My wife Noreen and our three highly skilled team of tasters Tadhg, Harry and Brona, after whom the business is named, all help out.  We use as much local produce and as many local suppliers as possible.

And by the way, Brona have perfected twenty-four different flavour combinations so far. So, if you don’t fancy the Salty Caramel, they’ll have something for you.