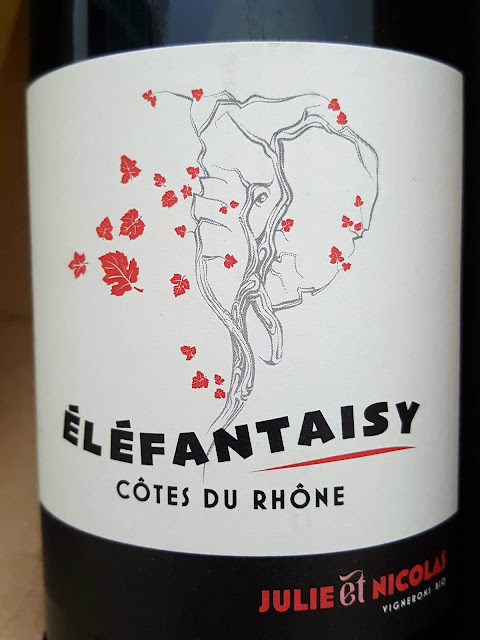 Dark ruby is the colour of this organic Côtes Du Rhone, one of the smoothest you’ll find. Intense aromas of ripe red fruit. It is fresh, pleasant and long.

Good character and the producers recommend it as an aperitif and say it can then be kept on the table during the meal, versatile enough, they reckon, to go with white and red meat, vegetarian and also with goat and sheep cheese. Highly Recommended. Well priced too.

It is a not unusual Rhone blend, 40% Grenache , 25% Syrah, 20% Mourvedre and 15% Carignan. The vineyard, in the Gard, about 45km west of Nimes (where denim came from - think about it), was bought in 1930 by the grandparents of Julie Aubert who now runs it with her husband Nicolas.

Long, long, before then, Hannibal’s elephants marched across these lands, including what would become their vineyards. Julie and Nicolas are happy to adopt the elephant as a symbol for the power and grace of their wines and, now that the elephant needs protection, as a  symbol for their commitment to organic farming. 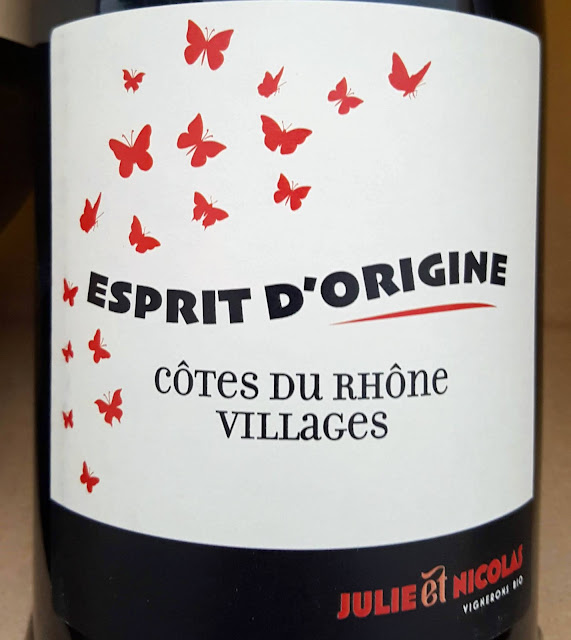 A deep cherry red is the colour of this honest and generous wine, a step up on the more general Côtes du Rhones and a (small) step under the Côtes du Rhones (named) Village. The nose is redolent of dark and ripe fruits, with a streak of spice. No shortage of flavour or spice on the palate either, supple and harmonious with beautiful tannins, this is made for food such as red meats (boeuf bourguignon, venison, lamb, coq au vin) and mature cheeses. Serve at 15-17 degrees.

Good to have a few of these at hand as they are so versatile. As you may gather, I certainly like this Rhone GSM (Grenache, Syrah and Mourvedre). Straddling both banks of the mighty Rhone, the AC stretches from Vienne in the north to Avignon in the south. The current success owes much to the setting up of the AOC in 1937 and subsequently a policy of keeping yields down enabled constant improvement.

Hannibal and Julius Caesar may have had an influence on the Rhone area but it is a pope and wine critic that put the local wines on the map.  In 1309 when Pope Clement V moved the papacy from Rome to Avignon. Most of the wine drunk in the temporary papal palace (they also had a summer palace called Chateauneuf du Pape) was from the local area and so, with the imprimatur of the Holy See, the fashion for Rhone wine began in earnest.

Clement of course came from a Graves wine family (think Chateau Pape Clement!) and would be followed by five more popes before the move back to Rome. The papacy was here for 67 years, time to drink a lot of wine and time too to build its reputation!

The Rhone was firmly among the most respected wines in France when infallibility of another kind arrived in the 1980s. Robert Parker, the American wine guru, "intervened". He just loved the naturally ripe style and gave them very high scores and his many international "followers" took his word for it, bought the wines and found out for themselves just how good the Rhone bottles really are.

In between Pape and Parker, there was the wind of 1956, perhaps even more influential than the famous pair. Then the Mistral battered the region for three weeks and contributed to the temperature dropping to minus 15 degrees. The olive trees, then the big crop in the area, suffered badly but the vines resisted so well that a majority of farmers turned to vine cultivation.