Kate and Denis Dempsey of Kinsale Mead Company are currently giving a series of insightful sessions on Zoom. More than an info session as I was able to order a quartet of their unique drinks (with a glass, of course) in advance and had it all in front of me for last Friday’s tasting.

Clicked in at seven o’clock and Denis told me and the similarly equipped "attendees" that he and Kate had started the mead company in 2016 with their first mead becoming available the following year. “Our operation is very much like that of a small winery, except that we don't have a wine press.” Mead is the oldest alcoholic drink in the world. “There are many styles, one traced back to China in 6000BC.”

Kate started the tasting with their Atlantic Dry. Ours had just been retrieved from the fridge while Denis said he loves it neat over two or three ice cubes.

It is the simplest of meads, based on pure orange blossom honey from Valencia. For every 300kgs of honey, they used double the amount of water. Chilled slightly, the aromas are floral, of the Spanish spring. You do get the taste of honey but the mead is not sweet, rather it is off dry. It pairs well with artisan crisps, olives, nuts, goats cheese, baklava. Each of the meads may be used in cocktails and the suggestions were shown to us and are also available on their website.

They used Spanish honey because there is very little Irish honey. Denis: “We are at the bottom of the league, a bit like our football team, just ahead of Luxembourg and Malta. But we do have a batch coming through based on Clonakilty honey that should be available in the New Year.”

Two saints, each well-known in the countryside west of Kinsale, are associated with honey. They are Saint Molaga (of Welsh origin) of Timoleague and Saint Gobnait, Patron Saint of bees and who has a fantastic stained glass window in her honour in the Honan Chapel in UCC. Cork micro-brewery Nine White Deer is named after a Gobnait story. By the way, the ancient Brehon Laws gave more protection to the bees than they have today.

The second mead, the Wild Red, has the same abv as the white at 12%. This is a bit more complex and is known as a melomel mead. In addition to honey, it has fermented fruit (the yeasts love the nutrients here and it leads to “vigorous fermentation” compared to the Atlantic dry). The fruit is imported cherries along with zesty Wexford blackcurrants “from a bee friendly farm” and forest honey from Northern Spain is also used.

“Serve at room temperature,” Kate advised. “It is so smooth, looks like a light version of Port.”And she suggested pairing it with strong cheese, brack, Christmas cake, and chocolate. And a chocolate brownie is ideal with the mulled version!

The light and refreshing Hazy Summer Mead was next on our list. Again this had just been extracted from the fridge. It is another melomel version, with no less than six summer berries, including strawberries, raspberries, blackcurrants, blackberry, and cherry.

“This is whole fruit fermentation, the frozen fruit put in whole, the only pressure its own weight. It is 11% abv and tannin levels are low. When tasting, spread it over the whole tongue to get the best from it. It is lovely with lightly spicy food, chorizo, blue cheese…”

In between they filled us in on more info about mead in general, including a drinking vessel called a Mether (think of the Liam McCarthy Cup) and that there were, perhaps are, medicinal versions of the drink, which are classed as Metheglin.

Kate and Denis are not standing still. Their latest variation involves three different barrel aged meads. All the barrels are European and their first was based on a Bordeaux barrel. Quite a wet one! “So wet,” said Kate, “that we got four bottles out of it. We had to drink them, of course!” It was all new to the Dempseys. “At 9 months, it tasted well and at twelve we thought it was ready.”

And I think that most of us who tasted the superb Merlot Barrel Aged Wild Red Mead Limited Edition last Friday concurred. “It is three years old, our oldest. The barrel has added to it. You still get the honey in the aromas but it is very smooth, very fruity, very drinkable, with great depth. Great with fine foods such as Duck paté, charcuterie and so on. It weights in at 12% abv.” 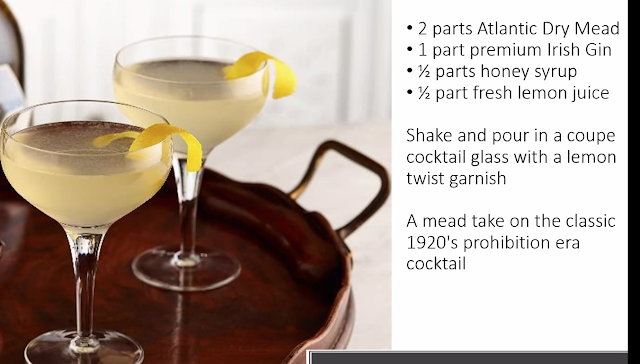 Denis added that Port and Sauternes cask version are now available as well. Watch this space! The meads are widely available and you may also order online here.  The first three meads in the tasting cost €22.00 for the full-size bottle while the barrel aged are €27.95 each.