We are sitting here in Cork’s famous Shandon at the end of an early evening meal and we agree that the Baklava we are enjoying is the best. Indeed, one of us is newly converted having found previous versions just too sweet. But this is not packed very tightly packed - it has the pastry layers for sure - and also seems fresher. I wouldn’t very much about the Mid-eastern sweet but this is delightful and very highly recommended.
A terrific desert (€6.00) then and it goes down well with my Arabic coffee. This is influenced by cardamom and comes in an open pot that you pour yourself. I also enjoyed that. Just reading the menu, you may well think that €3.50 is a bit much but the pot will give you two fine cupfuls.
The restaurant is the Four Liars and it has recently been taken over by two Syrians, Abdul Khallouf and Ahmed Saqqa. They’ve been told the story of the four liars (the clocks on the four faces of Shandon tower that disagree), liked it and decided to keep the name.
Their plan is to treat you to Syrian dishes. So the menu features food from their country which is of course, like all cuisines, influenced by the food of neighbouring countries. And many of you will be familiar with the likes of mezze, fattoush, hummus and the aforementioned Baklava.
No doubt, some visitors will not be that keen on dishes on the menu with strange sounding names (some un-translatable) but they’ll be catered for with more familiar fare such as Pizzas, Burgers, wings, wraps and so on.
But I’m anxious to try something from Syria and am puzzled when my order for Syrian Kibbeh gets a big thumbs up from Abdul. It is only later I find out that this is the Syrian national dish, a dish of many versions.
It is also a dish of many elements, an enormous plateful. The Kibbeh consists of lamb meatballs (tasty, aromatic), with tabbouleh, hummus, baba ghanouj, and spinach samosa (very tasty and crunchy). More like a starter and main course in one! 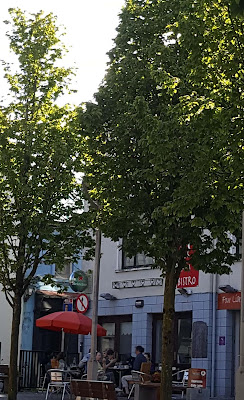 CL likes her Falafel and so ordered Falafel Platter: five chickpea croquettes with herb and tahini sauce, salad, hummus and their own pitta bread. The “crust” of the falafels was a touch on the hard side but overall it was a very flavoursome dish indeed, the salad veg chopped a little rougher than we’d expect, hummus and bread excellent. And great value for a tenner.

Best of luck to the two entrepreneurs who have just started here - they also do takeaway by the way. It is a work in progress, some tidying up to be done around the premises and perhaps the service needs a little more alertness but overall interesting food and good value once again in the Four Liars, a place where we were regulars about 25 years ago! Still some souvenirs around the place from those days but also some new items such as the shisha pipes. 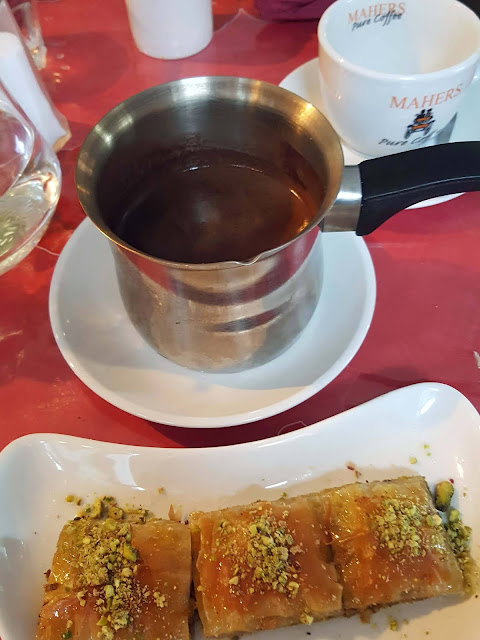