Burns Family Playing A Blinder At Home On The Farm

August 09, 2020
Burns Family Playing A Blinder
At Home On The Farm

The Killeagh farm of Joe and Sandra Burns is pretty well known for its stall at local farmers market and for its delicious vegetable crisps (available all around the country). They were going well on both fronts until Covid19 struck. Bang went the markets. Bang went the food festivals and with them a huge chunk of the crisps business.

But the resilient pair are fighting back. The business from the markets has been largely replaced by their superb Farm Shop. Believe it or not, the idea for this came from a little pioneering venture at the farm gate last year by daughter Meghan, one of their three children.

In the middle of all this, instead of feeling sorry for themselves, they found time to think of people less fortunate. Back in May, with huge help from the neighbours, they raised over €600.00 for Pieta House at an event in the farm.

And Joe told me that it is the neighbours who are the mainstay of the success of the Farm Shop. Here, though the shop is in the yard by the house, they operate a “honesty box” system. The price list for the vegetables is displayed (also available online); cash payment is put in an envelope and then into the box.

And what a choice you have! Fresh out of the nearby fields, you can have carrots (including rainbow carrots), parsnips, swede/turnip, white turnip, cabbage, red cabbage, broccoli, white cauliflower, purple cauliflower, romanesco, beetroot, kale, rhubarb, celery, courgette, onions, plus eggs, strawberries, mushrooms, tomatoes.

Of course, there are spuds, new at the moment, Queens or Ladyclaire. And Roosters. By the way, those Ladyclaires are the ones they use for their crisps (the white ones) and they are very good for boiling, steaming and chipping. And speaking of crisps, well they’re there too, the original Veg (carrot, parsnip and beetroot), Beetroot, and Mixed Potato.

A superb selection of fresh produce in the middle of the lovely East Cork countryside. Not in the middle of nowhere, by the way. This treasure trove is just about six minutes off the main Cork-Waterford road (N25) in the village of Killeagh.

If you’re coming from the city, instead of turning right for Youghal at the eastern end of the village, take the small road (L3806) straight up past the church. Tap P36 X582 into your Google maps and you’ll be there in no time. You’ll see a sign or two for the farm as you get closer. 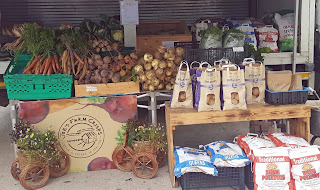 One of the highlights from last year was the pumpkin picking season. Groups of kids - play school, primary, families - came for the picking. No less than 83 children in one group from Mayfield. They enjoy the picking but also get the full tour, lots of tasing of raw veg - the coloured beetroot is a big hit.

It is educational in a fun way for the visitors and the Burns family absolutely enjoy it themselves and are looking forward to December 2020. In a year or two, there’ll be apples to be picked as well. Joe has planted some 100 trees. The deers, displaced by clear-felling in nearby wooded hills, took an interest at first but seem to have eased off and the apples are growing well.

Close to the lines of apples, a couple of hives have been installed by a local beekeeper as Joe and Sandra seek to improve pollination of the apples and other fruit and also expand the diversity of the farm. Another section of land has been planted with oats and linseed and it is allowed grow for the benefit of the birds under a Glas scheme.

Sandra is perhaps best known for the crisps, originally produced in a small mobile kitchen (2014*). In fact, they had really started in the farmhouse kitchen. The mobile kitchen was quickly outgrown and now they have a very impressive brand new permanent facility on site. Here they can do much more. The packaging though is slow and proving something of a bottleneck. A new machine had been eyed up to ease the pressure but, being a fairly large expenditure, its purchase has had to be postponed because of Covid.

With the farmers markets now off his agenda, Joe is enjoying some extra spare time and they, as a family, are getting out and about a bit more to cheer on their local teams and so on. Still, there’s always something being planned. Take Sandra for instance. She recently shared a Beetroot Brownie recipe with the shop’s customers and “it went down a treat.” She promises to work on another few! No standing still around here!

* Back in 2014, I tweeted: Just got to get Joe's Farm Crisps on Twitter. Brilliant product. They're still not on but at least you'll find them on Facebook now!