Nduja in Newcestown. On the West Cork Pizza Trail with The Curly Stu

On the West Cork Pizza Trail with The Curly Stu

The Curly Stu is bringing a touch of Naples to a trio of mid and west Cork villages. We called to Newcestown last Friday evening to see what all the fuss is all about. Stuart Bowes is the man behind The Curly Stu and, we know, from his many years as Head Chef at Barnabrow House, that the Scot is a good one. 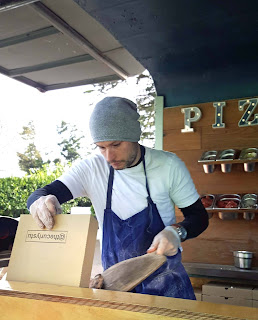 He told me: "I left Barnabrow at the end of August so I’m doing the pizzas Wednesdays in Castletownkenneigh (small country pub, Cookies, near my home beside Coppeen). Friday nights I'm in Newcestown in O’Mahony's Bar car park and Sunday evenings in Cloughduv in the Spreading Chestnut pub car park, all from 5-8.''  He keeps Saturdays free for all kinds of private parties and gigs.

He has a regular menu posted up on the side of his converted horse-box and every session he has at least one special and they can indeed be very special. The regulars include Margherita and Pepperoni, both very popular with the younger generation. Also in Newcestown, his Nduja (spicy salami on a Margherita base with fresh chilli, red onion and chilli oil) and his  Smoked Scamorza cheese (again on a Margherita base with roast piquillo peppers and West Cork Garlic scape pesto).

We were early and got ourselves one of the picnic tables by the pub. A week earlier, we'd have been able to take our pizzas inside. Still the sun was out as we sat down with the Nduja. We had enjoyed one of those in Barnabrow months ago and this lived up to the memory, absolutely top class with the occasional delicious hits from the Nduja itself.
On then to the Scamorza. Another gem with the Italian cheese a star with the peppers and that garlic scape pesto also playing leading roles. Of course in all his pizzas, that base is out of this world, great for the taste buds and, as you can read below and in his social media, for the digestion.

At the end of the second pizza, the rain started to come down and as the evening was also rather cold, we decided that discretion was the better part of valour and made a run for it. But not before Stuart boxed a third, the special, for us. We were wondering how it would survive the 40 minute spin home.

But not a bother.  Just a few minutes in the oven and the Ardsallagh goats cheese on a Margherita base with artichokes and caramelised onion ketchup came up tasty trumps. Another beauty from the Scotsman. That super base, the artichokes adding juice and texture and their unique modest flavour to the pie and the ketchup also pitching in.

So three pizzas on a Friday night and all three of the highest standard, a standard that you won't find in too many places on these islands. Skill, and attention to detail pays off, quality in quality out. Some very lucky villagers in West Cork. 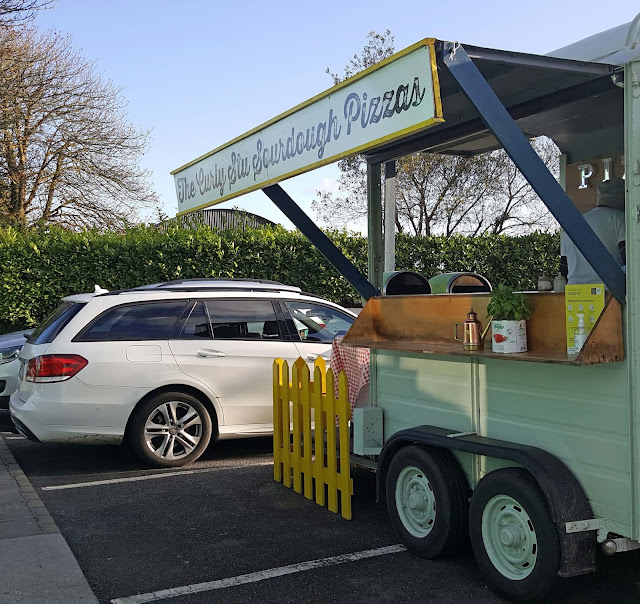 Stuart confessed: "I’m a man obsessed with the Neapolitan way. Since the lockdown I’ve been doing them Wednesdays, Fridays, Sundays and they were very busy! Since everywhere opened up I’ve managed to keep a lot of regulars and there’s new customers coming so it’s still going very well!"

"The dough is made in the traditional Neapolitan way, so mixed the day before and is generally always kept at room temperature, normally for 24-30 hours. They have a really nice airy puffy crust, a little soft in the middle and are cooked for 60-90 seconds at 420-450 degrees c."

"I’m playing around with the actual fermentation, I was using a sourdough culture before but I’ve been using a (pre ferment) called poolish for the last few weeks and that has given great results. I’m going to try biga next, which is similar to the poolish method, but with half the amount of hydration in the pre ferment."

"I have an Italian supplier that is really passionate about his produce! The flour I’m using is Molino Spadoni PZ4. This flour mill is very well known for their quality in pasta flour, I would have used this in London. The mill is in Ravenna, northern Italy, and only uses Italian grains that are quality controlled and checked." 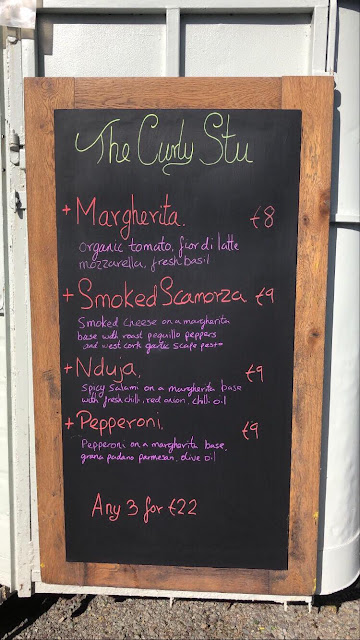 "The best thing is my supplier organises for me to get the flour straight from the mill now so it is super fresh. You can actually smell and see the difference when mixing the dough!!"

"I have a Sunmix mixer on order. This mixer is known for being one of the best you can buy. It can make and close the dough in 15 minutes so you are not overheating the dough with the friction. These are made to order in Italy. Fifteen long weeks I’ve been waiting so far but it is going to be well worth the wait!!"

"The Fior Di Latte mozzarella is made in the Campania region - "The mother land of mozzarella" my supplier calls it. There are no chemicals in this cheese and the difference compared with most of the other mozzarellas I’ve tried is very noticeable. The cheese melts nicely and goes stringy when cooked in the high heat and doesn’t colour and go crispy!"

"The tomatoes are certified organic from a company down south of Italy called Manfuso; they have good ethics and all tomatoes are canned on the same day as harvest with no added salt."

"I also get organic extra virgin olive oil, so straight from the first press of organic olives and with no heat."

"Nduja and smoked Scamorza are both becoming well known with the folks here in West Cork and both are really good quality products."

"And then I have Ardsallagh goats cheese, I use West Cork garlic scapes for pesto, I got a load of scapes from him at the end of the season. I have Gubbeen chorizo on the options for weddings. I used Toonsbridge Stracciatella last week for a special, I got Asparagus from Drummond House for a few weeks on special so I’m just trying to work my way around the suppliers around the general area.

"The ovens I use are Gozney Roccbox. They are easily portable and a great product that are exceptionally good at keeping the high temperature inside the oven consistent at between 420-450c to get that Neapolitan crust. Especially when I’m busy!"

You'll see those little ovens mounted on the counter, that is if you can take your eyes off the busy chef as he assembles and cooks and talks all at the one time. As we were quite early, we were kind of wondering what all the action was about. But it turned out he gets quite a few advance orders for collections.

Do watch out for those specials. I'll give you just two examples here.

1 - Braised Ham hock with smoked Scamorza cheese and portobello mushrooms and then finished with a honey mustard mayonnaise.

And you can check out others on his Insta page thecurlystu

And another thing to watch out for is his offer. All the pizzas are keenly priced but best of all is the standing offer of three for €22.00, terrific value for a family meal on a Friday, a Sunday, or a Wednesday!