The evolutionary journey of Spanish Wine

Back in 2013, at a dinner in Ballymaloe House, Telmo Rodríguez declared that wine in Spain “had been in the wrong hands, now it is starting to be in the right hands. I am between a boring generation and an exciting generation”.

Now Telmo finds himself handing over the baton to that new generation of Spanish winemakers, as he told this week’s Spanish Wine Week webinar hosted by Tindal’s Harriet Tindal MW.

After 30 years pushing the boundary, he is excited in his new role as mentor. “There is a most exciting new generation, time now to help and support them, to pass on the experience…. especially to help and push on the kids from the countryside. Now I love to teach and leave the others to do the job. I’m very proud of the last 30 years, recuperating grapes, recuperating vineyards. Now’s the time to recuperate the small grower.”

Long before the Ballymaloe visit, he had heard of a legendary mountain wine from Malaga, via references to it from the unlikely pairing of Shakespeare and Hugh Johnson.

But it had disappeared and off he went to Malaga and began to search for the high altitude old vineyards and, as is his habit, talked a lot to the old people. He didn’t get too far but, in 1998, settled on an area and with advice from Château Y’Quem, started production. He secured a plot and then planted it with Moscatel.  It took three or four years. He finally got it right and the results were exquisite.

Harriet Tindal got the best from a strong line-up for the seminar which was titled "The Progress of Tradition. A discussion on the evolutionary journey of Spanish Wine.” Telmo’s colleagues on the panel were Jonatan García, Suertes del Marques, Tenerife; Jan Petersen, Fernando de Castilla, Jerez; and Sara Pérez, Mas Martinet, Priorat.

When Jan Petersen took over Fernando de Castilla in 2000, the small firm was already well-known in Spain for the quality of its sherries and brandies. The firm organised new staff in both production and sales and that, along with the acquisition of a neighbouring high-quality vineyard in 2001, led to their wines being recognised worldwide. In 2000, they were selling 30,000 bottles, now it is 400,000.

In his previous work with Osbournes, Jan had noticed a tendency towards buying better quality sherry. “There was a trend towards quality and we (Fernando de Castilla) helped create that trend, making more interesting sherry. We will always remain in that premium sector, will never supply big supermarket chains. We are also working hard on our brandy (which is raised in sherry casks). We have a very good network of distributors who, like Tindal, share our philosophy.

“History, that’s where we need to start, making tradition into modernity. Jerez is the most traditional wine area in Spain as wine has been made here for over 3,000 years. People call me a sherry romantic but go back in history and see what kinds of wines were appreciated. The cheap sherry market is dying. Indeed, the average age of consumers for one of the best known brands was surveyed at 77 years old.”

Jan is more into the lighter sherries and the firm bottles no less than five wines En Rama. “We were the first to use clear bottles for sherry and now some of the bigger companies have followed us. Lots of smaller companies didn’t exist 20 years ago are finding customers.”

“To make the highest quality, you need the highest quality fruit - you need to start in the vineyard. We harvest by hand and we don’t transport the fragile young wines to the cellar immediately - we wait a year to take them to the cathedrals of wine.” Lots of attention to detail here also, floors are watered regularly, good ventilation is maintained and the cellar faces the Atlantic.

Harriet introduced Sara Pérez and told us she was “pushing barriers in Priorat”. And you could see straight away that Sara is determined to get the very best from the granitic and schist soil of the land, a land capable of so much diversity in its wines.

“We must stretch ourselves, need to express our place, our small vineyards, our magic soil, in our wines. It is important to live together with our tradition and future. We don’t use a lot of technology. If we ignore the past (which includes orange and sweet wine), we’ll not have doors and windows to the future.” 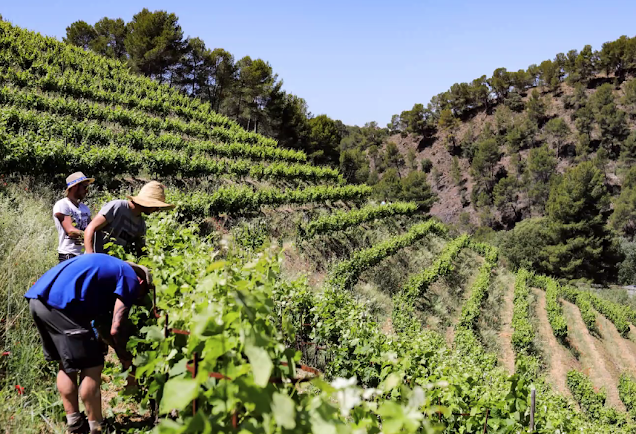 Harriet had many slides, photos and videos to illustrate the various points but the one that stood out for me was that of the amazing extended vines of Jonatan García in Tenerife. These are over 100 years old and stretch to between 40 and 50 meters. They take a different kind of pruning!

They grow mostly red grapes with Listán Negra the most popular. But there are many varieties on the island, most with unfamiliar names. There are some 50 indigenous grapes and they are still counting.

He was asked if manpower is a problem for him. “I’m a bit lucky. There are lots of young people familiar with the vines, always family to help and more manpower available at weekends.”

Spain, with its youth, its innovation, its diversity of terroir, (“a continent more than a country”, one speaker said), its huge selection of styles and grapes, its reserve of experience (as illustrated by Telmo (born into wine), and there are many more)), its respect for the past, its well-made well-priced wines, is very well placed indeed to be a major player at the quality end of the wine market for decades to come. Salud!

While sometimes sailor Telmo may be passing on the baton, that didn’t stop him from getting up early on the morning of the seminar to attend to the harvest. It was pretty cold outside - “I tell people the Rioja harvest is in winter” and he had the fire blazing in the background. Zoom doesn’t miss much.