Apple and Blackcurrant in Blackwater’s October Box. Gin and Cassis. 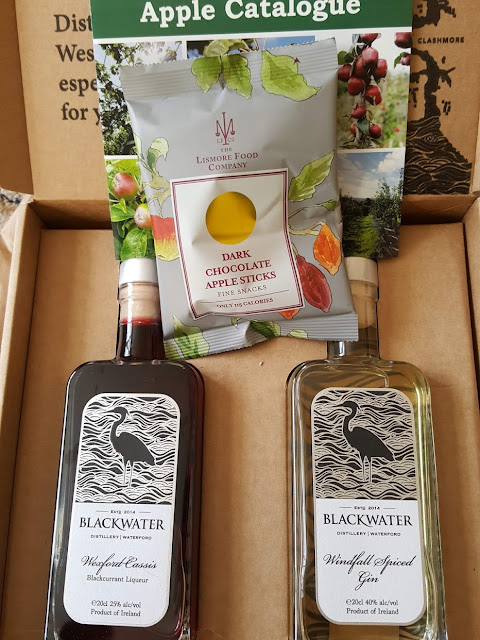 The Blackwater Tasters Club Box for October 2020 contained the two drinks, as usual, plus a few other pertinent bits and pieces. The two new, exclusive to the club, drinks were a Blackwater Windfall Spiced Gin 40% and a Blackwater Waterford Cassis 25%.

Blackwater’s Peter Mulryan hosted a Facebook chat about the box last week and declared the Windfall Gin “a banger”, saying it was created by their gin expert Kieran Curtin who joined the talk from a deserted Maureen’s Bar in Cork.

Kieran admitted to being very happy with it. “It was an idea I had a long time back but I could never get the apples to come across. Then the idea came again for this box and, after a lot of experimenting, we had a breakthrough. Before we used to cut the 70/80% still spirit with water but now we decided to cut it with apple juice and we were on our way. Then, we added apple brandy from a cask in the distillery and that tied it all together!”

Peter said it’s excellent, “great balance, well done Kieran”. Kieran confirmed they went for the usual apples spices, “clove, cinnamon, all spice” and both agreed this was not one to be scaled up. It is not filtered, just settled naturally. “If you see some haze, it's completely natural.” Blackwater’s mixologist John Coleman conjured up a Spiced Collins as the cocktail for this one: “Very easy, great before a meal”.

Next up was Des Jeffares as it is his Wexford blackcurrants that are used in the Waterford Cassis, “..very good blackcurrants” according to Peter. “How long have you been growing them?” he asked. Des explained that the business had been started by an uncle of his father. His father carried it on as did Des who, 6 or 7 years ago, decided to stop being just a supplier and go into juice side of it for himself.

John Wilcox is the Head Distiller at Blackwater and he developed the new cassis. He rose to the challenge despite not knowing much at all about the fruit. “But I did have friend in Italy who had introduced me to currants via a book that he wrote. You could say this is an Italian, Irish, French hybrid!"

Des’s knowhow was crucial too. “You need to wait for fresh berries. When they are good and ripe, you get a more powerful colour and good sugar, as good as possible for you guys.”

Wilcox: “It is important to stay true to the fruit, I didn't realise currants could be so tart. I wanted to present a true cassis and in a style that people would be comfortable with. A lot of balancing went on but I think we did hit the perfect spot.”

And he may have had, judging by the reaction. Peter: “This is a limited edition for the club. But the way things are going, we might expand it. By the way, this is nice in a shot-glass straight from the freezer.” John Coleman’s cocktail here, Velvet Rain, looks very well indeed, very tempting and again “great after a meal”.
Thinking of going for the December box? You'll need to move quickly - details here

Tried this with Elderflower Tonic (Fever-tree) as indicated. Thought, with first sip, that there may just be too much of the orchard here but soon began to appreciate the balance that Kieran and company had worked hard to achieve. Worth persevering with, though you may never get this exact same blend again. Pretty experimental, pretty much a one-off, pretty damn good.

Took Peter’s tip here. Poured a shot straight from the freezer over ice. It is certainly flavoursome and refreshing and you get a sense of how it would be perfect in either a simple Kir or a Kir Royale.

This was one of the two in the August box but it’s only now that I had a chance to sample it.  Used a plain Schweppes tonic. No doubt there's a touch of the Jaffa cake here, in both aroma and flavour. Just not sure there’s enough distinctiveness to carry it beyond this first edition though.

Small Batch Irish Botanical Gin. London Dry Gin style. Distilled and bottled by Blackwater, using local blackcurrants, elderflowers and apples. They combine these botanicals (and more besides) in pure Irish spirit, “then distil everything in our traditional copper pot still”. Having noted those “local” botanicals, I made a little “cocktail” here:

Very happy with the result - not too sure it deserves the cocktail title though. But the wee amount of cassis worked a treat, a terrific little sipper, a happy harmony reigned.

By the way, Robert Boyle was an alchemist and one of the fathers of modern chemistry and lived in West Waterford.