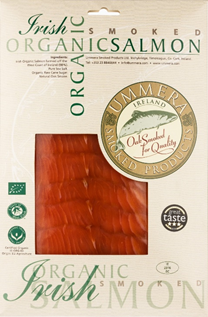 Organic salmon makes a splash at Great Taste, reeling in a Golden Fork for the smokehouse

Great Taste, the world’s most trusted food and drink awards, has reached its grand finale for 2020, with the Great Taste Golden Fork from Ireland presented to Ummera Smoked Products from Inchy Bridge, Co. Cork for its Smoked Irish Organic Salmon.

Smoking salmon in Co. Cork for nearly half a century, making the transition from wild Atlantic salmon to organically grown Atlantic salmon 14 years ago, Ummera Smoked Products impressed the Great Taste panel with its organic salmon’s “lovely texture”, “great mouthfeel” and “a level of smoke that is measured to perfection.” As the praise rolled in for this product, one judge said, “this is as good a piece of smoked salmon as I've had in years.”

Having impressed at every stage of the blind-tasted judging process, as a record-breaking 12,777 entries were assessed over 14 weeks of remote judging and socially distanced judging sessions, the Smoked Irish Organic Salmon, grown in the pristine waters off the west coast of Ireland, was celebrated as the best tasting product in Ireland during the virtual Great Taste Golden Fork award ceremony on Thursday 22 October.

Taking place across the Guild of Fine Food’s social media channels and website, the online event brought together food lovers, producers, retailers, buyers and chefs to discover this year’s stars of food and drink, providing a vital boost for the industry as the nation moves towards the most important Christmas period in a generation. Held later in the year than usual, after the lockdown interrupted judging just one week into the schedule, the Golden Fork trophy announcements are the final instalment in a Great Taste calendar that has been reinvented at every stage, in order to stimulate much-needed consumer support for independent retail and hospitality over the challenging months ahead.

The Golden Fork from Ireland was sponsored by Bord Bia and also nominated this year were the Great Taste 3-star winners; Gooseberry Spread from Crossogue Preserves in Thurles, Co. Tipperary and Heritage Cure Ham from James Whelan Butchers in Clonmel, Co. Tipperary.