The new Franciscan Well Jameson Aged Pale Ale was launched during a lively evening in the Oliver Plunkett, Cork. Tuesday night’s event saw the new beer make its bow in the presence of Jameson whiskey, good company, and music upstairs and downstairs.

You may not hear it much nowadays but back in the day, “a pint and a drop” was a regular order in Irish public houses. But that pint (it could have been any of the stouts) and that drop (unless specified, could have been Paddy, Powers or whatever bottle was already open).

This new pairing though “is a specific pairing” according to the Franciscan Well’s Shane Long who went on to say that the ale’s bitterness had to be “toned down to accommodate the whiskey. This is not any old whiskey and beer”. 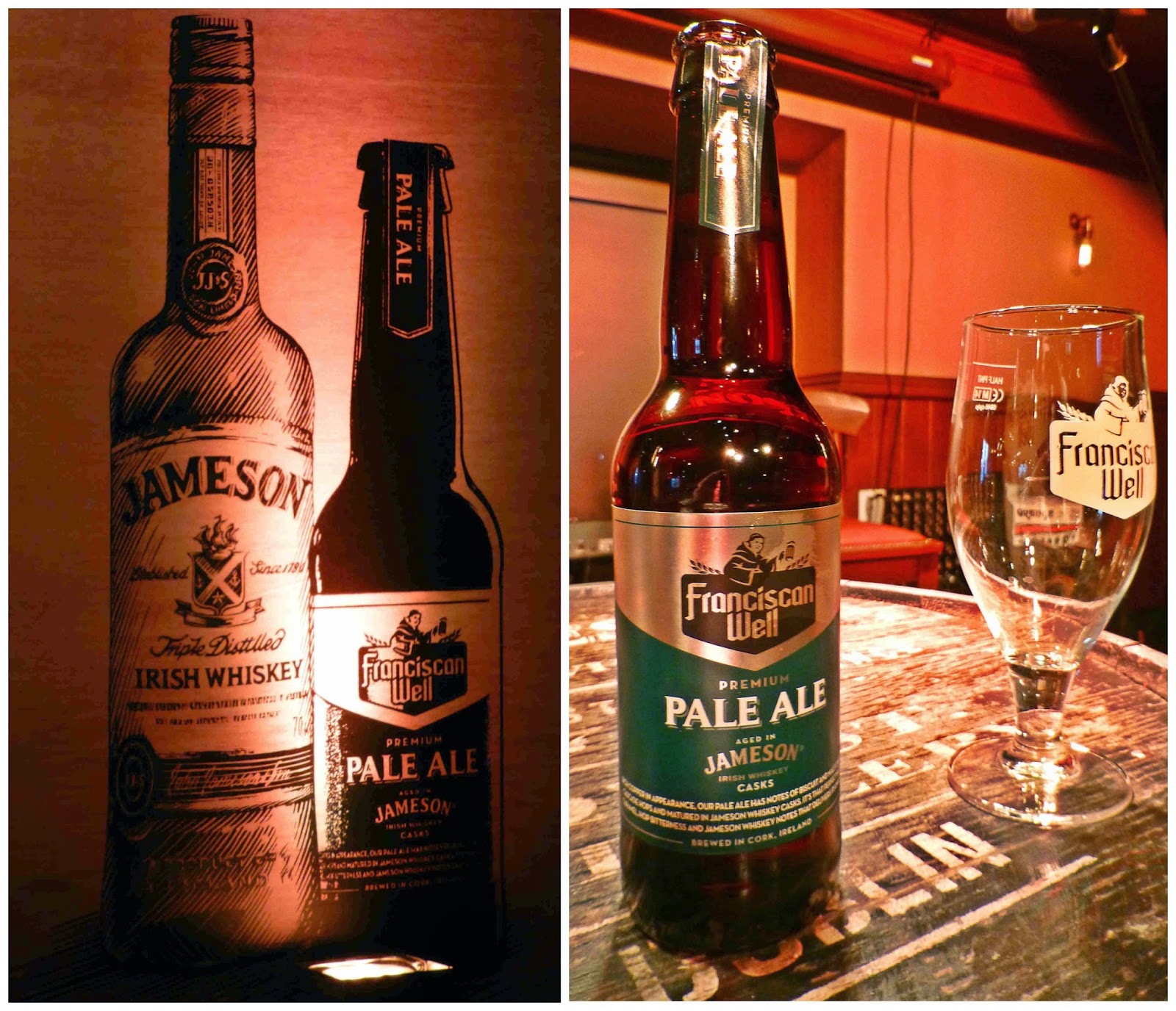 “The first batch of the ale won an international award and this second batch is even better”, said Shane who also revealed that the beer went into casks at 4% abv and came out with a 6% rating, hence the smaller bottle size (33cl). By the way, the casks (which had been used twice for whiskey) are now back in the distillery and are filled again with whiskey. “Watch this space!” we were told. And do watch out too for the famous Jameson Stout from the Well as that will be available again before Christmas.

Dave Quinn, Irish Distillers Master of Whiskey Science, filled us on on some of the technical details of the collaboration between the distillery and the brewery and went to describe the well-known well-loved whiskey. “Jameson is a complex whiskey but smooth and easy to drink with fruit, spice and floral characteristics. It is not smokey.”

The new beer is described as having biscuit and malt notes “with a hint of gooseberry fruity tartness, balanced by citrusy hop bitterness, and a smooth whiskey oak finish”. It is excellent on its own.


But it reaches another level when “paired” with the whiskey. Take a sip of the Jameson and enjoy! Then follow with a sip of beer and you’ll appreciate an enhanced experience. The bitter hops of the pale ale are in perfect balance with the sweetness of the whiskey. And the combination leads to a smooth mellow finish. Time maybe to revive the pint and drop. Perhaps a glass and a drop!
The fun continued with Master Cooper Ger Buckley from Irish Distillers dismantling and reassembling a whiskey cask in the impressive Frisky Irish Whiskey room of the Oliver Plunkett and we had our own band upstairs. As live music played, I tried some of the other Franciscan Well beers on offer, starting with Friar Weisse (an old favourite of mine) and moving on to the excellent Chieftain IPA.


And it wasn't all drink. We had some nibbles at the start but the bar’s chef then treated us to some more substantial examples of his kitchen’s skills later on. Very good (especially that absolutely delicious slow cooked Beef Cheek pie) and very much appreciated. Finished the beer downstairs entertained by terrific traditional musicians and some energetic dancers! A lively pub, music every night of the week, and one to re-visit!