Sparkling and Still on Skype. Wine Geese on the World Wide Web.

September 22, 2014
Sparkling and Still on Skype.
Wine Geese on the World Wide Web.

A Decanter Gold Medal winner was among the wines featured at a novel international tasting based at L’Atitude 51 (Cork) last Friday as part of the nationwide Culture Night. The work of three of the younger generation of Ireland's Wine Geese was celebrated with the winemakers talking about their vineyards (in Sussex, South Africa and New Zealand), telling us all in L’Atitude about their various wines as we sipped them in Cork and watched the winemakers on Skype (big screen, bien sur).

Beverly Mathews, Colm McCann and Maurice O'Mahony, who organised the 2013 series of Wine Geese visits, were behind this venture, the first public internet wine-tasting in Ireland, and the speakers on the other side of Skype were Dermot Sugrue (Wiston Estates, Sussex), Marion Smith (Elgin Ridge, South Africa) and Fleur McCree (Little Beauty, New Zealand).

Dermot, a Limerick man, had wanted to be a winemaker since he was 16 but it was some thirteen years later before he started a Viticulture and Winemaking Course in England's Plumpton College. His progress was astonishingly rapid thereafter, much like the English sparkling wine industry, and his Wiston wines are regular award winners.

“Wiston Estate vineyards are on pure chalk soil, just like in Champagne… This gives finesse, aging potential and a certain Je ne sais quoi. They are showing so beautiful, though still so young. And are in the top restaurants in the UK."

We tasted two. First up was the Blanc de Blancs NV. This has been voted the best in England. “It has a sense of richness that belies its youth. It is one hundred per cent Chardonnay, mostly 2011 plus reserve from 2010 and has spent 18 months on its lees.”

He described the Rosé 2011 as “a freak of nature”. The year was unbelievably warm, a poor Spring but a great Summer that extended into September eventually yielding very ripe grapes. “An accidental Rosé, our most successful wine, still very young and so exuberant early on.

“That exuberance is now fading and it is maturing into a sour cherry type. From over one hundred English sparkling wines, this Rosé has won one of just Decanter three golds.” It may be a freak of nature but Dermot hopes to replicate it in 2014. This year has been similar in many respects to 2011 and fingers are crossed for the harvest next month.

Next stop was Elgin Ridge in South Africa and here we met Marion Smith (right) from Ballyjamesduff - her cousins still run the family farm there. The farming goes on at Elgin Ridge and Marian is the largest breeder of Dexter cattle (the native Irish breed) in the Western Cape. Sheep “mow” the grass between the vines. Elgin Ridge is organic.


But there were no vines there when Marion and her husband Brian arrived about eight years back. The farm had lain idle for some time and that made it easier to go organic. “We are living the dream and have wonderful workers here.”

As she spoke the vineyard behind rapidly fell into total darkness. “I miss the long bright evenings sitting out in Ireland”, she said and invited anyone visiting in the area to drop in and see them. Be sure and take a look at the website. It is a gorgeous place, so many animals.

We tasted their 282 Sauvignon Blanc. The vineyard is 282 metres above sea level and the vines benefit from the cool afternoon breeze and the proximity of the ocean. It is a different style of Sauvignon Blanc with a beautiful freshness. 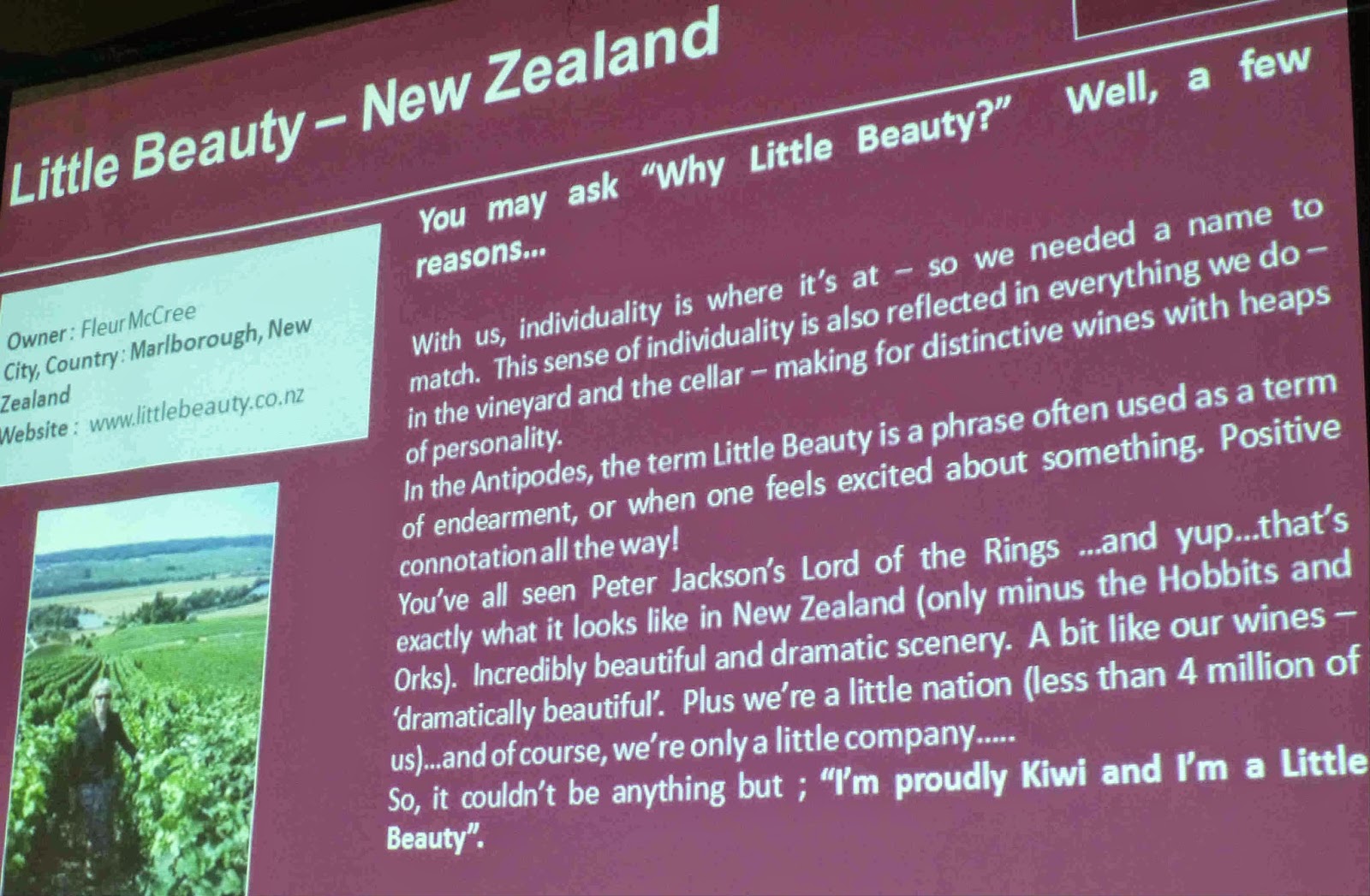 Fleur McCree, whose ancestors (the Cox family) hail from Passage West, is a serious winemaker but is always game for a laugh. We were thanking her for getting up early in Marlborough until she pulled the curtain behind her and showed us the Tower Bridge in London. Fleur spends much of her time on the road selling her gorgeous Little Beauty wines.

Marlborough is famous for its Sauvignon Blanc but this time we were tasting Little Beauty’s Pinot Gris. “We have a tiny strip of Pinot Gris. ..The bad weather doesn't get to the East Coast … We have huge sunshine hours and not much rain… Hot by day, cold by night is good for Pinot Gris.”

"It is a prolific grower, too much so, too much fruit is no good! You must discipline the variety, quite hard - cut the bunches by hand! It is also thick-skinned and that stops the sunshine getting through. So open up the canopy to aid ripening. The fruit is hand harvested and it is gentle handling all the way after that".

“The aromas are herbaceous, stone fruits (peaches, nectarines). It is almost creamy, hints of mild spice. Notice that textured element when you lick your lips and inside your mouth. It is an interesting wine from a sensation perspective, oily and concentrated. It is better served not so cold as it then expresses itself better, not so shy. It is a very popular variety, very approachable.” It sure is. One of the best of its kind as far as I am concerned!

“What would you pair it with?”, somebody queried.
“With your cornflakes,” came the rapid reply. “One of your five a day!”.  She did go on to say Asian, particularly Asian with nuts, peanut Satay is her own favourite. She also recommended Pork belly with chilli and garlic etc or maybe pork roast with apricots.

Cork Billy said…
Have had a query on the availability of the Pinot Gris 2011. Locally, you may get the Little Beauty at Curious Wines, Bradley's and, of course, at L'Atitude.
September 22, 2014 at 3:50 PM