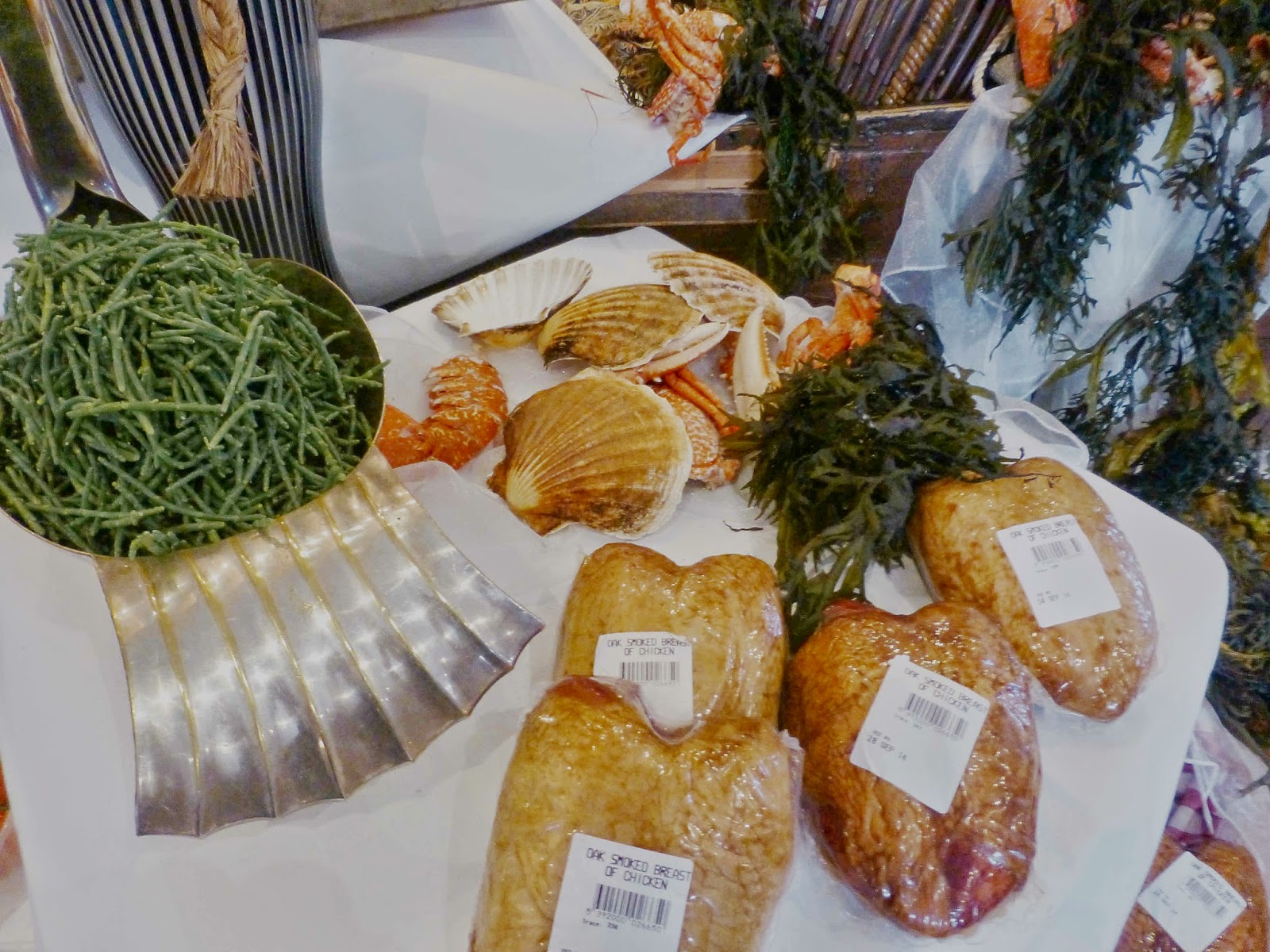 Meet Jim and Maria Kennedy from the Intertidal Zone. “We spend most of our time there,” said Jim as they introduced us to the Magic of Seaweed at the start of the third annual A Taste of West Cork meal in the Inchydoney Island last Friday.

Jim and Maria had quite a few samples of the various seaweeds available (to taste, to touch) and spoke in detail of their different properties. “Seaweed is a super food….from a garden that doesn’t need to be weeded… dulse and carrigeen have traditionally been used in the Irish kitchen...Seaweed is also an amazing detox ingredient….makes a nourishing top dressing for your garden plants.”  And so much more.


Jim advised to “look at the Spring tides when the better seaweeds are exposed”. “But,” he added, “If doing it yourself, be careful.” Read more about seaweed here.

Jim and Maria, who run Atlantic Sea Kayaking, are from Skibbereen but you could come across them almost anywhere, from the Liffey to Mexico, from Spain to Japan.


Friday evening though was firmly rooted in West Cork and Inchydoney Head Chef Adam Metcalf had the major task of blending all the marvelous products of the area, from its bountiful and beautiful land and sea, into a multi course meal as the week long festival, also named A Taste of West Cork, got underway. Surprisingly, there were no local beers, ciders or spirits included. Maybe next year?

Adrian, the local representative of Findlaters, took us through the various wines that had been picked to accompany the meal. We were greeted with a glass of Segura Viudas Brut Reserva Heredad Cava and that went very well indeed with the Seaweed Sushi (including an amazing toasted Nori) that came with Ummera Smoked Salmon and also the Smoked Shannonvale chicken with Pickled Ginger and Sea Kale.


Some gorgeous breads on the table as we sat down including a Dulse Seaweed, Marsh Samphire and Atlantic Sea Salt Loaf. And Sea Lettuce featured in the Bantry Bay Lobster Course as did a spiced Bluefin Tuna.

Next up was a hand foraged Sea Vegetable soup with a seaweed scone! Rabbit was stuffed with local black pudding and also accompanied by a Shannonvale Chicken Lollipop.


All the while, the wines were being poured and the next course, the Castletownbere Monkfish (caught by the Fair Maiden), was accompanied by an intense Albarino. The fish was wrapped in that terrific Gubbeen Cured Ham and there was some discussion as to whether the salt of the ham did the fish any favours. Someone suggested that a pancetta wrap would have been better. Someone else said the fish didn’t need a wrap at all!

Then on to the sweet things, an Elderflower Parfait (foraged elderflower, Valley View egg and Clona Dairy Parfait) with a hand picked Wild Damson Compote and a Bushy Strawberry Sauce. Delightful.


To finish, there was a choice of Barry’s Tea or Java Coffee with Inchydoney Recipe Chocolate flavoured with seaweed, some oak smoked Gubbeen cheese along with the hotel’s own Plum and Sultana Chutney on an impressive Patisserie Royale Cracker, handmade in nearby Lisavaird by Richard Graham Leigh.

That last course was accompanied by a glass of Graham’s Late Bottled Vintage Port. The earlier wines were Vicar’s Choice Marlborough Sauvignon Blanc (quite a favourite at our table), Pionero Mundi Albarino, and Penfolds Koonunga Hill Shiraz (70%) Cabernet.


So well done to the many West Cork producers chosen this year and a big congrats too to Chef Adam and his crew who did the hotel proud.  I spoke to one guest who has been at all three events. He reckoned the first was a bit over the top (quite large portions all the way through), the second was underwhelming (probably in reaction to year one), but “this time they got it right”!  And so say all of us.
See account of the full day in West Cork, including Distillery visit, here.
A Taste of West Cork Atlantic Sea Kayaking Barry's Tea Findlaters Gubbeen Inchydoney Island Java Coffee Shannonvale Chicken