Two men of France, Richelieu and Rabelais. And some animals!

August 31, 2013
Day 15
Two men of France, Richelieu and Rabelais. And some animals!
Those of you following my Loire story will be aware that I’ve “met” some admirable women here, including Eleanor of Aquitaine and Jean d’Arc. Today, it is the turn of two men, beginning with Cardinal Richelieu, a major influence in French politics, for much of the time what we’d call a prime minister today, in the 17th century, having been consecrated a bishop in 1608, and the man responsible to a large degree for the flight of the Huguenots to Cork and elsewhere.

You’ll find the Wikipedia article on him here. Not too far south of Chinon, Richelieu set about building a walled town to be named after him. And he made such a good job of it that much of it remains today, with the glaring exception of his own chateau. 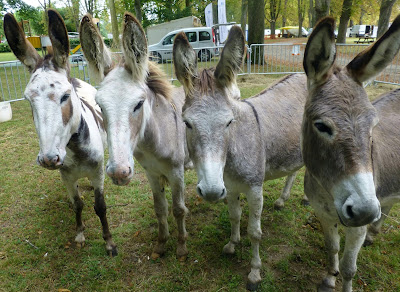 We thought we’d hit the jackpot when we saw a load of stalls in the market place and the outstanding timber framed market hall, another thriving Richelieu relic, all set up for a feast. But the fun and games weren’t due to start for some hours.


Still we had a walk in the magnificent park, another legacy from the cardinal, and saw some of the animal and farm machinery exhibitions being set up, including some very strange forms of poultry and a great line-up of vintage tractors (some with machinery on tow).

Sixteenth century Francois Rabelais was the complete Renaissance man, a monk (of at least two orders), a doctor, a major writer and a humanist. We visited his original home in La Deviniere today, a modest enough dwelling, though hugely enlarged by its underground caves, which have many uses.

Between La Deviniere and a nearby Abbaye de Seuilly there is a short walk, a pleasant one. The 600 metres is lined with banners, mostly with quotes from Rabelais. “I love you from the bottom of my liver” is one. “To philosophize in wine, not in vain” is another.  His humanist tendencies are underlined with “Try every art of peace”.
Read them all on the way back to the car park at La Deviniere and soon we were on our way to Chinon and to our favourite traiteur. Every holiday maker in France, especially if you don’t want to do any cooking, should check out the best local traiteur on arrival.

They make lovely cooked dishes, including some French classics, at a fraction of restaurant prices. Quality is usually good (you should try at least two shops) and the meals just need re-heating in the oven or microwave. We bought enough for two main courses each for about thirty six euro and are all set up for the weekend. Back to the restaurants after that!

And the wine this evening? Nothing less than bubbles and a very special rosé sparkler from yesterday’s visit to Chateau Minière. Eating and drinking, included among the arts of peace. Cheers.